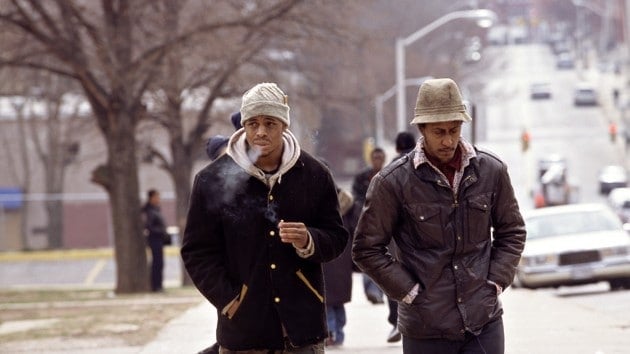 I’m not sure when or where or why this phrase began rattling around my mind, but it’s been beating against my brain like an elevated heartbeat. All I can hear, ringing in my ears: “It doesn’t have to be so hard.” The Wire is a show that reinforces that for me. All of this corruption and violence and pain is totally, completely useless. D’Angelo gets it (through an assist from the police), and doesn’t see any sort of reason why things have to go on the way they do. When a drug addict comes up, clearly looking for a score, D’Angelo treats him with humanity while the other dealers treat him like garbage. The sale can go down without treating a junkie poorly; he’s going to buy the drugs one way or another.

It’s funny to me as well how hardcore conservative the other dealers get about D’Angelo’s position. They act as if the junkie is the only one at fault for being a junkie, and that’s just not true. It’s the old chicken versus the egg; if McDonalds never existed, would people still eat fast food? If the Barksdale crew wasn’t selling drugs, would junkies still find their fix? The answer is, of course, of course, but the fact of the matter is that they are a contributor to a problem. They are an I-beam in the foundation of drug abuse and violence in Baltimore. They are the hands and arms and backs that hold up a corrupt system, and they do it for their own profit.

If that sounds, or feels, or smells familiar, it’s because it is. The criminals are much more like the police then they’d ever like to admit. It’s an interesting parallel, and our heroes in that parallel are McNulty and D’Angelo. McNulty takes an extreme route to dealing with this murdering of his case; he refuses to participate, and refuses to lie about why. He’d rather kick his career off a cliff then join in on this level of corruption. It’s no secret that McNulty isn’t a hero cop. It’s not secret that he’s probably not even that great of a guy. But McNulty realizes that this case pushes things a little too far; not a domino, not an earth-shatterming moment, perhaps, but it’s another step down a dark alley. If states’ witnesses are now open season, then things truly are lost. If Avon Barksdale is allowed to murder people that were supposed to be under the highest of authoritarian protection, and get away with it because those assigned to protect us don’t want to deal with the fallout, then things are truly lost.

D’Angelo gets it too, and his battle is a step out of that alley. Sure, he probably can’t change the world. He probably can’t stop all of the violence. But he can treat people with a little more respect, and make things just a little bit easier. McNulty and D’Angelo know that it doesn’t have to be so hard; that every bust of an amped up black teenager doesn’t have to result in a ferocious beating. This isn’t the law of the jungle. You get no points of snapping back at someone who disrespected you. It doesn’t even lead to more safety, which is the most ironic thing of all. You think that authoritarian violence is the answer; that total control will lead to salvation; that if only you could hit them at all times you could save the world. But I can tell you and history can tell you that it never works. Not forever. We put people in chains and made them work in blistering heat for no wages and barely enough sustenance to make it to another hellish tomorrow. And yet they still kept coming. You cannot keep people down, and the more you try the harder it gets.

The Barksdale crew is selling substandard heroin. Even this, D’Angelo has a problem with, but to Stringer it’s a positive. Instead of buying one vial, junkies have to buy two; that means more money for them.

“We do worse, we get paid better.”

Capitalism is held up as an ideal because it encourages competition, but we know that it doesn’t. When capitalism is allowed to run free, without any constraints, it strangles those who practice it. Income inequality is the device in which capitalism is killed, and capitalism is the mother and father of income inequality. Those with money get richer, and those without it, get screwed.

The episode ends with McNulty in his car, having a beer. He learns from his FBI buddy that Lieutenant Daniels is dirty, and that the department knows he’s dirty. McNulty is pushed up against yet another barrier; he has no reason to trust Daniels any more. Perhaps he believed him before when he said he didn’t want the case to go down this way, but regardless of truth McNulty is now totally alone. Bunk has given up; Daniels has given up; Kima is just as brutal and power-hungry as the rest of the brotherhood. He’s going to have to do this by himself.

The world is expanding on him, too. There’s a new player; Omar and his crew, meticulously planning, taking out the Barksdale stash house. He’s ready to get what he believes is his, by any means necessary. Omar knows the cops are watching, too. While the cops are complaining about Stone Age equipment (rightfully so), Omar and his crew sit in a van and write down notes. They are not going in guns blazing. They are not going in to be violent for violence’s sake. They want what they want, and they pinpoint their target, and they hit it. It’s the police versus Barksdale, and both of them versus Omar. It’s too bad that the cops and robbers aren’t going to be paying enough attention to see them coming.