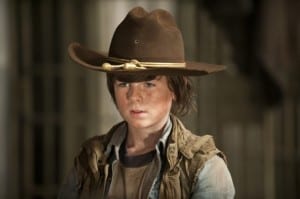 Oh, Walking Dead. Despite the fact you put an “Intermission” in the middle of Season Three (just when things were really getting exciting, thus forcing us all to cool our heels for a couple of months), I still love you. I’ve even been indoctrinated into the Walking Dead game (courtesy of my WD night buddies, Aldyth and Brad and their 72 inch flatscreen TV), and yes, I am still emotionally invested in the show and the characters, even when they piss me right off.

So…picking my Top 10 moments in Season Three was not an easy task, because there were quite a few to choose from. And I also reserve the right to choose very LONG moments. But… here I go, with the disclaimer that these are MY favorite moments and if anyone doesn’t agree with them, they are free to pick their own. I’m not the Top Ten Nazi here, okay? “No Walking Dead for YOU!”

1. The New Improved Bad-Assed Carl (called the “Tiny Executioner of the Zombocalypse” by my friend Aldyth).

It’s hard to choose just one moment for Carl this season. I mean, he mercy-kills his own mother, rescues Tyreese and pals from a Walker-y death and then locks them up for the safety of his own group; pretty much calls his dad on the sucktastic job he’s been doing on his Ricktatorship; and might be one of the best shots of the group. Way to go from “Where’s Carl?” because the little twerp can’t stay where’s he’s supposed to, to “Where’s Carl?” because his group needs him to save their asses. Yup, I am loving Carl’s character this season. Give him a few years and a crossbow and he might be a match for Daryl, unless he goes totally psychopathic, gets an eyepatch and becomes the Governor’s Mini-Me.

Sure, Monterey thinks they’re all hot stuff ’cause they have sharks and sea horses and manta rays and stuff. That’s nothing compared to the Gov’s double stacked aquarium full of cranial goodness, both zombie and human. Between the initial reveal and Michonne’s first glimpse of it, I’m not sure which was more fun… but either way, it firmly established that Mr. “I’m a warm, caring, strong, and reluctantly sexy” dude is crazy. And that Andrea is a few cards short a deck herself for sticking with him. Anyone else think Shane was a better choice?

3. Michonne Gets a Second Expression

Seriously. Is it just me or did anyone else get really tired of Michonne’s suspicious booboo kitty glower? So when she discovers the Governor’s stash of zombies, lets them loose and prepares to make zombie sashimi, that subtle little smile of hers was pure joy. And later in the season, when she retrieves the picture of Lori, Rick and Carl from the zombie-infested diner for Little Ass Kicker, and shows Carl the carved cat she snagged for herself… that full on genuine smile shows that Michonne is capable of bonding with someone and upped her likeability factor up there with her kick-assedness quotient.

Oh, come on now. You gonna try and tell me you were NOT all teary-eyed when our own Redneck Legolas found Carol all weak and starving in the closet, so he did a My Bodyguard scoop-up-and-carry back to the rest of the group? Romance, people! I know some of you might opt for the “Daryl as baby whisperer” moment, but I call shameless pandering to the female fans on that one. But okay, yes, Little Ass Kicker is a great name for a baby. I am, however, calling a WTF on whoever is styling his hair in the last two episodes. No way that ‘do qualifies as anything but “carefully styled to look deliberately unkempt.” I found it distracting, and not in a good way. 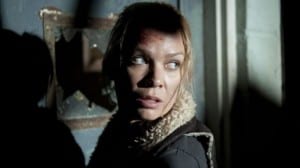 4. The Most Dangerous Game, Zombie Style — Starring Andrea and The Governor

As much as Andrea has annoyed fans with her continued bad taste in men and inability to read between the lines (she is not one for subtext — how the hell did she ever make money as a lawyer?!), I was still rooting for her when she finally woke up and decided to get the hell out of Woodbury to warn Rick and Co. at the prison, and I totally enjoyed the goofy-ass, improbable hunting scene with Andrea as prey and the Governor as a sort of evil Hawkeye in Last of the Mohicans (“Just give up! No matter where you are, I will find you!”), with the uncanny tracking ability of Predator. Up there with the hunting sequence from Slave Girls from Beyond Infinity for pure gleeful fun. And the Governor’s inexplicable reappearance after being inundated with hungry walkers (best moment in the episode!) and then showing up EXACTLY where Andrea arrived outside the prison was worthy of a Friday the 13th movie.

Now you see him … and now you see a bloody stain in the road and a gore-soaked backpack. Disturbing on so many levels, but manly because it showed how far Rick has come from his humanitarian stance in Season One and most of Season Two, into someone who would leave a man to die… and then stop and collect the backpack after the fact. Harsh, but a great character defining moment for Rick, and a really sucky fate for our backpacker.

He’s totally crazy, but he’s back! And okay, I have to admit to being annoyed with the “previously on Walking Dead” spoiler before this episode, showing a Season One moment with Rick on the walkie-talkie, sending a transmission to Morgan. It was a dead giveaway to anyone paying attention that the mystery person setting traps in the town was Morgan. So… no big surprise at the reveal. Spoiler factor aside, though, it was still awesome to have Morgan reappear, and realize just how much both he and Rick have changed since they first met. And the story of how he lost his son was as heart-breakingly poignant as the early scene in Season One where Morgan tried to kill his undead wife … but just couldn’t pull the trigger.

…and then is immediately shot and used as a human shield by Carol. Seriously, I was totally expecting Axel to be a serial killer along the lines of one of the prisoners in the graphic novels. Either that, or a he was a closet Civil War re-enactor. That carefully waxed mustache just raised all sorts of flags and I kept waiting for someone to turn up brutally murdered and Axel to be the culprit. Instead I was treated to a really nice conversation-verging-on-flirtation between him and Carol, making me wonder if we’d have a future love triangle between Axel, Carol and Daryl. I was well and truly taken by surprise when Axel was shot. Yes, it pissed me off because it underlined what seems to be an unspoken rule that subsidiary characters must NOT develop a character or they will die (which is secondary to There shalt not be more than one sympathetic, studly black male on the show at the same time and yes, I am STILL pissed about Oscar), and also delighted when Carol had to use his corpse as a shield. Go, Carol! 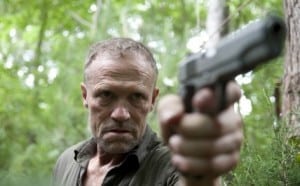 I’ve always liked Merle’s character, even at its most heinous because Michael Rooker is such an awesome actor (he made Meryl fun to hate). I am also a total sucker for a good character redemption, so when Meryl let Michonne go and then went about his drunken merry way to take out as many of the Governor’s “army” as possible, I was a happy camper. It was a great plan and at least to my mind, Merle didn’t expect to walk away from it alive.

One stop shopping at its finest, Glenn’s romantic gesture to show Maggie how much he loves her is gross, funny, and touching all in one snap (off) of a finger. Enough said.

See what I did there? I could’ve said Paradise Lost, but… oh, never mind. At any rate, I loved Milton. His genuine feelings for the Governor (or at least the man the Governor was before he went more crazy than Morgan) combined with his need to do the right thing made him a great sympathetic stealth-hero. From giving Andrea a heads-up that her sexy snuggle-bunny with an eye-patch was beyond certifiable, to burning the pit walkers, to doing his best to stay alive until Andrea stopped dithering and picked up those damned pliers, right down to the reveal that Andrea had been bitten … Milton was awesome. 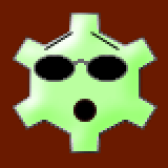