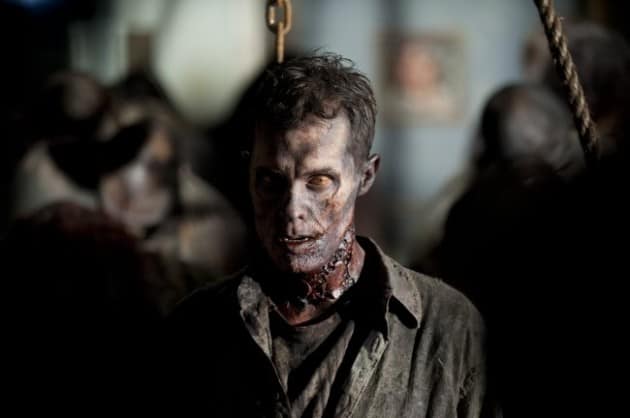 To prepare for tonight’s Andrea-centric episode of The Walking Dead I re-watched the season one finale “TS-19”, another Andrea-centric episode that saw the Human Rights Lawyer turned Zombie Killer arrive at an emotional apex.  Back to back, “TS-19” and tonight’s “Prey” make for a potent character cocktail;  anyone who doubts the character transforming dramatic energy of The Walking Dead would have a tough time dismissing Andrea’s dark journey of growth.  In abstract comparison, “TS-19” Andrea was somewhat absorbed in her personal agony, projecting a faithless outlook on the world and all too ready to give up on mankind; Andrea as of late has been a polar opposite.  Now she believes.  In many ways, it seems like she has absorbed a bit of Dale’s optimism for mankind’s ability to remain, well, human.  The most impressive aspect of her transformation is that we can suss out the minutia of her transformation.  It’s not something that happened suddenly, because the story suddenly called for it; it’s a carefully planned transcendence that brings with it the weight of three seasons of story.  Here’s what went on: 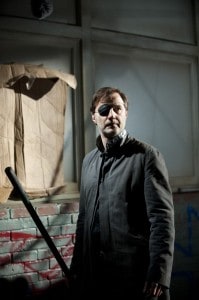 Andrea Makes Her Get Away

The Governor has begun preparing for his assault on Rick and the Prison, and he’s not being shy about it.  Both Milton and Andrea notice right away that The Governor’s preparations look nothing like a conflict coming to a peaceful close, but that’s not the worst part.  Milton shows Andrea that The Governor has begun preparing a torture chamber, assumable for Michonne.  Andrea at first decides she needs to kill him, but Milton foils her plan and convinces her she needs to go warn the people of the Prison.  On her way out of town, Andrea passes by Tyreese and Sasha and warns them that all is not as it seems.

Milton Face Turn — A Put On?

Milton has been kind of slimy–well, a lot slimy–so is his assisting Andrea just a part of The Governor’s larger plan?  It’s great that we can still have these doubts, but after tonight’s episode where we see Milton candidly deceiving, or attempting to deceive, The Governor, it becomes obvious that Milton has changed sides.  A ‘mystery’ that is set up during the episode might be the final nail in the coffin for Milton’s devotion to The Governor.

Tyreese, Sasha, Allen, and Ben are taken to the zombie pits to gather walkers.  Tyreese quickly puts it together that the biters will be used in the potential Woodbury offensive against The Prison.  This notion doesn’t settle well with Tyreese.  He gets the guv’s beef with Michonne and Rick, but he sees unleashing the biters on The Prison as a heinous attack against the innocent women and children there.

Okay so great opportunity to galvanize Tyreese’s character as a humane and socially just person, that will come in handy if they integrate him as a regular, but The Walking Dead writers had a secondary use for this scene.  Later, when no one is around the pits, a mysterious figure comes and burns all of the zombies.

The shots of the aftermath, with still un-dead charred zombies trying to get their broiled limbs to move, are among some of the most chilling scenes in The Walking Dead history period, but the mystery of who exactly burnt theme turns out to be fairly short lived.  After addressing Tyreese concerning the biters and fishing for an admission and receiving none, The Governor approaches Milton.  Milton tells The Governor he hopes he figures out who burnt the pit zombies, and The Governor tells him with a smirk that he has already figured out who did it.  Milton makes the worst move a guilty person could make in that situation and turns and walks away without saying a word.  Fear for Milton.

Andrea Made it to The Prison … BUT

So Andrea’s cross country trek was as harrowing as you’d expect, particularly since The Governor pursued her.  There is a great little game of cat and mouse in an abandoned factory–Are there any other type these days?–that must be seen to be appreciated, but ultimately Andrea does make it to The Prison.  But is caught before she can emerge from the tree line.

In the closing scene we see that The Governor has taken Andrea prisoner and put her in his torture chair.  Is he going to warm up on Andrea next week?  Perfect his technique while he awaits the capture of Michonne?  That we will have to wait for.

Interesting enough, The Governor didn’t tell anyone he had captured Andrea.  Not even Martinez.  I take this as an indicator of just how paranoid The Governor has become.  He literally trusts no-one.