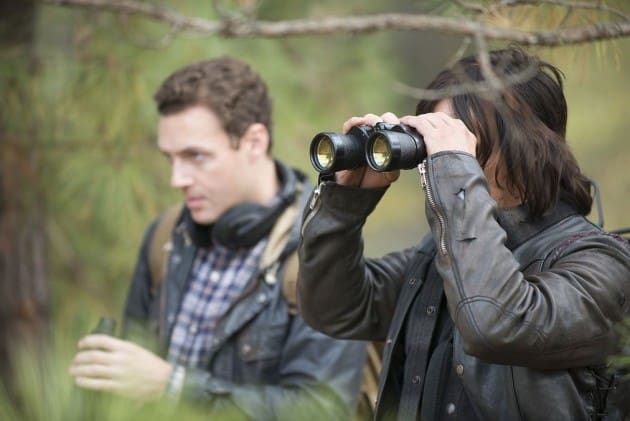 It ain’t a season finale of The Walking Dead without a good Rick speech, and “Conquer” takes its sweet time getting there, carefully lining up its pins to fall in rapid succession in the season’s final eight or nine minutes. Yet its the journey it takes getting there in the 50+ minutes leading up to it: though “Conquer” whiplashes between the active and the reflective, the underlying existential debate remains a strong undercurrent in each scene, with characters acting as lightning rods of optimism or pessimism, a culmination of the season’s overriding theme of hope vs. reality. What it makes for is a unevenly paced, entertaining as hell finale – one that ends the show’s most ambitious, consistent run with a literal bang.

This idea of hope is embodied best in old Morgan, who continues to fight the good fight, even after the reveals of season three’s “Clear”, which showed a despondent Morgan clinging onto his humanity (forget about his sanity). Somewhere, Morgan found hope in the world; maybe it was Rick leaving him alive, or maybe it was something else – but Morgan continued to fight, and never stop trying to hunt down the one human being he still knew on the planet, though after seeing what he arrived in Alexandria to, Morgan’s own crisis of faith (which hopefully will contain a little more subtlety than Father Gabriel’s) may only be beginning, his hope for a friend shattered by what appears to be a brutal, instinctual execution at the hands of Rick.

That moment closes the season on a disturbing note, Pete’s murder coming on orders from Deanna mere seconds after Pete had slashed Reg’s jugular with Michonne’s katana. Is that what Morgan expected to arrive to? It seemed that desolate, angry attitude was something he left behind when he finally left the shanty he’d been writing on the walls of, letting two men go who nearly just killed him. Yet that was his luck: good luck he had, came back around as bad luck for red poncho man, and the world continues moving forward.

Thus is the game of nature though, right? There’s growth, than destruction, then growth again. The Walking Dead‘s demonstrated this numerous times, and “Conquer” nails this idea home by suggesting that there’s simply surviving or dying, not “growth” or “morality” or change”: over time, a world full of survivors and aggressors erases any sane, conceivable concept of right and wrong. It’s either make a decision to survive and forgive, or forget and kill – either way, both add up to a grand total sum of zero (a number that can be represented by the variable “W”, no?). No matter how much Rick talks about preparing them, or scares him with the suddenly-invoked martial law – a subjective decision made on the part of Deanna, that ultimately costs both her husband and Jessie’s their lives.

Was that a “lucky” moment for Alexandria? Without that particular event happening in that singular moment in time, Pete’s death would’ve led to Rick’s banishment, no doubt. But now Rick is literally given the power to kill, saving the town from zombies (because he happened to notice an open lock Gabriel left, being the random, useless character he’s quickly become) and taking out Pete in a matter of minutes. Is it really just luck that keeps us alive, the very thing that Rick seems to want to remove from the equation?

Ahh, to be lucky – or to be unlucky, like the poor man in the red rain coat, whose throat gets slit to join the zombie trap set by the Wolves, who get crap beaten out them by Morgan, and clearly continue to chase the tail of the bow-staffed boss who eluded them in the episode’s opening scene – and seeps its way into every story of the episode. Unfortunately, depicting this runs The Walking Dead into a number of issues: some of the situations orchestrated in “Conquer” rely on idiocy, not luck – particularly idiocy on the part of the Alexandria crew, who once again prove that they have no idea how to run their own town or control the two dozen or so people living in it. Reg’s death, along with Glenn’s survival, reek of this convenience: how the hell does Glenn survive being covered in zombies, moments after being shot in the arm? We don’t see this: it just happens, like when Deanna’s other idiot son just tells the kind-of-suicidal Gabriel (who’s been acting erratic, completely lost at sea by the writers)to close the gate for him, then subsequently walks away.

Yes, these situations lead to fruitful moments (Glenn letting Nicholas live, Rick making his impassioned season-ending speech to the people of Alexandria), but there’s some frustrations to be had in how these stories are orchestrated to their conclusions. When “Conquer” is tackling the idea of luck vs. fate (which often comes with shades of the show’s other debate, humans vs. animals, overlaid on it) and doing an effective job disguising the seams holding this all together, it’s a entertaining end to the show’s most consistent creative season yet (save for a few episodes in the back half here, of course).

– That’s the end of Season 5! Thanks for joining me through another year of zombies, angry Rick face, and Carol being awesome.

– So does Michonne give Pete that sword (aka “Something’s going to happen; just don’t make it happen”), or does Pete get that after Carol threatens him (“I’m not in my own house!!!”). Not sure if it really matters, but it’s still an odd detail.

– Reg’s death is so laughably silly: drunk Pete shoves him with said katana in his hand, and it slits his throat. It works, because it leads to Deanna telling Rick to shoot Pete (which he doesn’t hesitate to do, of course), but the set-up is so goofy (his speech to Maggie is one of those “I WILL BE DYING SOON” speeches – nothing like hope gets you killed on The Walking Dead).

– so The Wolves were once a “tribe” who were mostly eliminated by other groups in the area/were kicked out of Alexandria – but they’ve returned, with their gleeful zombie traps and silly signature line. Not so excited for this story line (it falls into the same pattern of other Big Baddies on the show), even though Alexandria will obviously need external conflict at some point.

– everyone’s hair looked different, or freshly cut: was the finale filmed long after the rest of the season?

– I don’t know what they’re doing with Sasha and Gabriel anymore – I was hoping Gabriel would get eaten, which isn’t a good sign for the strength of the character.

– best part of the episode: Daryl and Aaron’s conversation in the car. Just incredible.

-See you next fall for Season 6 – and this summer for the poorly-titled Fear The Walking Dead!