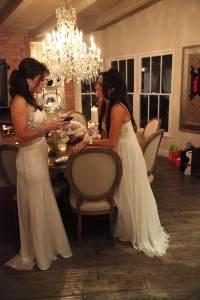 Wow. Last night’s episode of The Real Housewives of Beverly Hills was the true successor of last season’s “Dinner Party From Hell” episode. At least so far. Brandi’s little shindig came close, but fell short of the mark due to all the ladies not being in attendance. But really, how could your mouth not be on the floor after that epic confrontation between Taylor, the other Housewives, AND the Househusbands all throwing in their two cents? Let’s discuss…

Blacklisted From the White Party

Taylor looked like a straight up fool when she arrived to the party, but to be honest I felt slightly sorry for her. Only slightly.

First, let me say that I understand how Taylor pretty much set this situation up for herself. In fact, it’s ok to go as far as saying that karma came and bit her square in the ass. However, as much as I’ve been enjoying Camille all season, if she really felt as agitated as Adrienne and others made the case to be then she herself should have stayed at home. In doing so, Camille would have saved Kyle from being put in that sticky situation and future compromising incidents to come.

But, and there are a plenty of “buts” in this scenario, Adrienne and Lisa (as well as their husbands) are justified in being a bit apprehensive when it comes to Russell possibly slinging lawsuits their way as if they were cigars at a baby boy’s birth. I mean threatening to sue your friend for repeating something your wife told her is a bit extreme and not worthy of whatever email Russell sent to Camille in the first place. So in the end, I feel sorry for Taylor in the manner of how the entire matter was handled, but not for the path of cray-cray that got her there, which has dominated most of the Real Housewives of Beverly Hills this season.

Also, I seriously felt sorry for Kyle the entire episode, because she was put into one of the most awkward binds possible and it wasn’t her fault. I would’ve been just as upset as she was and probably would’ve went as far as ending the party all together. I mean, let’s face it. With Kim starting some seriously unnecessary drama with Brandi (which I will get into in a bit) and everyone coming at Kyle about Taylor, the White Party had a very drab aura surrounding it and we’ve only just seen the beginning of it.

Kim vs Brandi – Round… Oh, Who Cares Anymore?

These two women should just get restraining orders against each other and call it a day, because this fight is getting older than time itself. I kind of blame both ladies in the matter since one doesn’t know how to let bygones be bygones, and the other just doesn’t know when to leave well enough alone.

We get it, Brandi. You’re “sorry.” If Kim doesn’t want to be your friend, then keep it moving and save yourself from having her walking stick of a finger find its way into your face again. But did you guys catch how Brandi slick assumed Kim was on drugs again? Yep, Brandi, your apology earlier was really from the bottom of your heart.

Kim, we know you don’t like Brandi, but damn! When you see her, go the opposite direction next time. It’s simple as that. Although, it would be nice (maybe even wise) for you to just drop the animosity towards her and move on. Who knows? The karma gods might just leave you alone and Kyle and your kids might accept your new boyfriend. Just a thought.

So what were your observations about tonight? Was Kyle right for blacklisting Taylor? Are we over the Kim and Brandi feud? Say your piece on the latest episode of the Real Housewives of Beverly Hills!

Reminder! This is the last episode of the Real Housewives of Beverly Hills until next year. Be sure to mark your calendars for January 2nd, 2012!