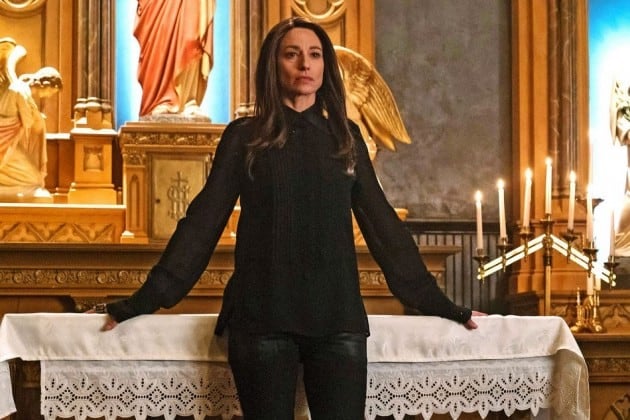 After weeks of build-up, Dahlia finally made her appearance on The Originals last night.  She’s proving to be every bit as dangerous as Freya promised.  Mikaelsons have been dropping like flies lately with yet another major death in this episode.

Klaus and Mikael never fought on the same side before, which should have been the giveaway that this would be the last we saw of the Original family patriarch.  Freya had sent their father away to collect the three elements necessary to defeat Dahlia.  He was probably on his way back already when Klaus struck a deal with Davina to locate him and expedite his witch hunt.  I loved the scenes of Klaus persuading Mikael that they were essentially fighting for the same thing now: their daughters.  Freya was the one child Mikael barely knew because of Esther’s deal with the devil that is her sister, so it was sweet to see Mikael actually express a normal human emotion of parental love towards one of his children.  After Dahlia destroyed the weapon they binded to weaken her, Klaus resorted to his long festering hatred of his father to get the viking ashes necessary for a second attempt at defeating Dahlia.  That was such a powerful scene to watch, as one tear rolled down Klaus’ face right before he killed Mikael.  At first, I was so upset at Klaus for taking his anger out on Mikael right when they finally started getting along, but then when he walked away, he revealed his clever reasoning.

If you’re keeping count, we’ve now lost both Mikaelson parents these last two weeks alone.  Finn is temporarily out of commission thanks to Freya.  Kol is technically dead, but since he died a witch, Rebekah and Davina may be able to bring him back with his consecrated remains.  Interestingly enough, Klaus’ deal with Davina for her help with the binding spell meant he would hand over Kol’s original body’s ashes.  I wonder if that means if and when they do resurrect him, would Nate Buzolic return?  Daniel Sharman was a perfect addition as the new Kol/Kaleb this season, but unfortunately, he’s booked for another show.

Back to the plot, everything the Mikaelsons are doing is for Baby Hope.  Elijah enlisted Josephine LaRue’s help to protect an abandoned jazz club as a sanctuary to keep Dahlia out.  The plan was for Hayley and Jackson to take Hope there that night, but Jack had another idea.  A stupid idea, at that.  He asked Hayley if she would run away with him, and while I understand his point that this isn’t their war to fight, his actual plan was weak.  He wanted Aidan to meet him and Hayley with a car only 15 minutes before Marcel was due to pick her and Hope up.  That was a whole other issue that Aidan struggled with.  He’s been in cahoots with Klaus and knew that he would kill him if he helped Jackson run away with his daughter.  It was all a complicated way to highlight the very cute relationship between Josh and Aidan, who are essentially a family of their own now.

-”You see we’re fighting for the same thing, you and I. To save the ones who do not see us for the monsters we truly are.” -Klaus appealing to Mikael

–Davina: “It must really suck to have to be you all the time.” Klaus: “It hasn’t been a picnic honestly.”