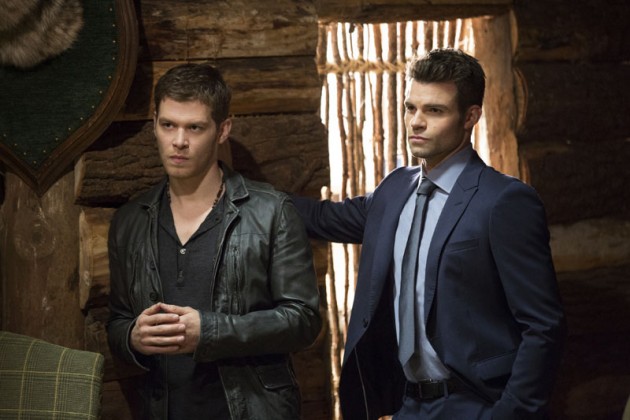 As the old saying goes, “secrets, secrets are no fun unless they’re shared with everyone.”  Last night on The Originals, Marcel, Elijah, Klaus, and Hayley all faced threats to their deepest secrets.  Some of which ended up coming out, and in those cases, the characters felt a sense of triumph and relief.

Finn summoned his brothers into a Hunt Room, which is possibly the coolest witchy way to remotely mess with other people.  It made them all physically fall unconscious wherever they happened to be at the time, and their spirits were able to communicate in this meeting room all under Finn’s control.  He lets his master plan be known to Klaus that his entrapment spell over the compound is set to be released at sundown, thereby unleashing a pack of ravenous vampires on the unsuspecting humans of New Orleans.  When Klaus barely flinches at this plan to attack the city he claims to love so dearly, Finn starts to get mad.  He wants so badly to hit Klaus where it hurts, but he can’t seem to figure out who or what he holds closest to his heart.  Rebekah’s switcheroo certainly enraged Klaus, but Finn wasn’t to blame for that anyway.  Elijah’s torture by Esther didn’t rattle Klaus in the least.

Obviously, we know the secret that Klaus, Hayley and Elijah are protecting: Hope.  Her very existence is dangerous to everyone involved, now including Cami as her temporary caregiver.  I love that all these separate storylines are finally converging back to the basic formula of the Mikaelsons (and their inner circle) versus the rest of the world.  It wasn’t even surprising then when Klaus genuinely forgave Elijah for confessing to his murder of their first love, Tatia.  After all, that was centuries ago so if Klaus couldn’t see past Elijah’s bold move to protect the baby and also clear his conscience, I would have been disappointed.

Now that Klaus is on his way to stop Hayley from going through with the truth-telling trials necessary for her wedding to Jackson, let’s just hope he gets there on time.  It would be one thing if the process of divulging all their secrets to each other in front of an Elder witness didn’t require a certain magical herb.  Hayley has no defense against her deepest secret from slipping out.  Jackson did offer to go first, so maybe he will have some earth-shattering confession that could be enough to make her want to call off the whole deal. Honestly, I get that she wants to help her wolf pack be free of their uncontrollable curse, but this all seems too much to commit herself to a supernatural marriage.

Through a series of flashbacks that would explain his current hallucinations from a werewolf bite, Marcel really got a chance to shine in this episode.  The similarities alone between his current situation and his time serving on the battlefields of World War I were incredible.  A ghost of a fellow soldier named Joe haunted him while he prepared and inspired his vampire followers to keep their act together without feeding on any humans once they were freed from the compound.

As usual, the dialogue of the episode was golden.  One particular quote that was repeated many times to truly reinforce the theme of the show felt more relevant than ever: “Family is not determined by blood, but by who you fight for and who will fight for you.”

What did you enjoy the most about “Brotherhood of the Damned”?