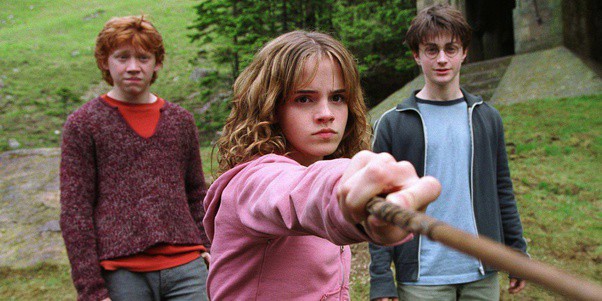 Remember the line “Kill the spare” spoken by a decrepit Voldemort, who had yet to be fully revived in his own body, in The Goblet of Fire? It was spoken regarding Cedric Diggory, who was played by Robert Pattinson, and apparently, this is when some folks think that the Harry Potter series became completely dark. If you’re sitting there blinking slowly and feeling as though your brain is about to overload with the overwhelming number of dark moments that happened before this particular scene then you’re not alone. “Kill the spare” is without a doubt pretty heartless, but it’s not the worst thing that was said before this part came along, and in fact, the first movie was riddled with problematic scenes since first off, Harry’s parents are dead and he’s an orphan. That’s pretty bad without needing to go into it any further. Then comes the idea that he grows up in the Dursley household, where’s he’s absolutely reviled. Just imagine how hard he had to cry because Petunia didn’t want to change his nappies. Then we could go to the fact that the Dursley’s make him sleep under the staircase, which isn’t too dark in itself since he has a space to himself and a bed, along with a lot of hand-me-down items that are still his unless Dudley wants them. Then they don’t care if Dudley brutalizes him since Vernon and Petunia would likely blame Harry for antagonizing Dudley in some way. Yeah, that’s the way to raise a stable human being. It’s only because of JK Rowling that Harry didn’t grow up to be a psychopath and kill the Dursley’s first once he learned magic.

Then there’s the idea that he attends a school where that has a forest that’s off-limits to first-year students since it’s possible that wandering into the woods would cause a gruesome death. But then, as punishment for being out of their beds, Harry, Ron, and Hermione, as well as Draco, are sent into the same forest with Hagrid to search for something that’s been killing unicorns. That’s not only dark, but that’s also horror-movie stupid, not to mention endangering the welfare of children. Then there’s the matter of living in a castle, with ghosts, and teaching kids magical spells that can allow them to harm each other from a distance, and with a dangerous, three-headed dog sequestered in the castle and a larger than life chess set that will actually batter or slice a person to pieces if they step on the board and don’t finish the game. Then there’s the horde of flying keys that can impale a person since they obviously can stick into a wooden door. What about this story isn’t dark except for the sappiest moments? And that’s just the first movie, we haven’t even gotten to the second one yet.

Oh yes, it gets better. Despite being a magical world there’s still a serious divide between the haves and have-nots, and the Weasley’s and the Malfoy’s appear to be the polar opposites that bring this point home, with the Malfoy’s having just one child and the Weasley’s having more than even their magical home can easily withstand. Oh, and did I mention a teacher that tried to kill Harry in the first movie because he was a willing host to Voldemort’s soul? Plus, there’s another teacher that absolutely hates him as Severus Snape makes it clear, and they play a full-contact sport known as Quidditch that can kill the player’s thanks to the speeds and the impacts that are involved. And the second movie, the Chamber of Secrets, details a monster within the castle, a Basilisk, that the teachers might have known about but could have figured was tucked neatly away. But then of course it gets out and only Harry can possibly kill the thing, with the help of Dumbledore’s phoenix no less, but definitely not with the great wizard’s help, no of course not. But this movie also featured a hint that Harry can speak with snakes, and a wizard that’s good at memory charms but not much else, apart from taking credit for the exploits of other wizards after erasing their memories. But wait, there’s one movie left before we get to talking about spares.

Apparently, Harry’s godfather is an animagus, something slightly different from the werewolf that his new teacher turns out to be, and the revelation that the person that betrayed Harry’s parents to the dark lord, Voldemort, is still alive and has been acting as Ron’s pet rat for years. Oh yes, and there’s a tree called the Whomping Willow that actively tries to kill Ron and Harry at one point, and Hermione is given a time-traveling device by Dumbledore who apparently has everything that’s going to happen and that’s supposed to happen mapped out years in advance. I mean, how could he know when and what to give the kids when it’s the perfect time? But “Kill the spare” is the turning point? Someone wasn’t watching the movies that closely because I know there’s a LOT of other moments I didn’t mention.