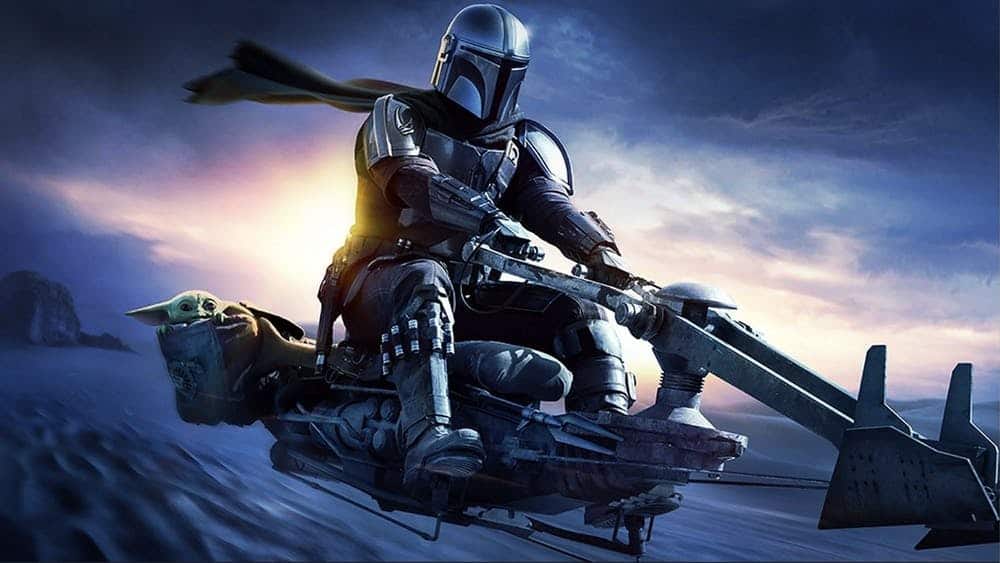 There might have been a few people that were disappointed in the first and second chapters in the second season of The Mandalorian, but one can’t deny that it’s been a thrilling ride to this point since we did get to see a krayt dragon of all things, and Din was able to communicate with the Tusken Raiders. So the Mandalorian he was looking for turned out to be a marshall that had purchased Boba Fett’s old armor off of a group of Jawas, big deal. The fact that the marshall returned the armor in exchange for Din’s help with the dragon was a positive note, and the fact that the two X-Wing pilots not only saved Din and his passenger from the white knobby spiders in the next chapter was even better. They didn’t even arrest him for his actions from the first season, perhaps figuring that since he’d helped to capture the mercenaries he’d been working with he’d earned a reprieve. This current chapter though, it’s something that likely had a lot of people pumping their fists into the air at the mention of Ahsoka Tano coming up, and it’s very likely that the appearance of three more honest to goodness Mandalorians was bound to make people happy. But the revelation that Sasha Banks of the WWE wasn’t playing Sabine Wren might have taken the wind out of many sails, but her performance is still insanely impressive.

As much as it shouldn’t need to be said, no more frog babies were consumed in this week’s chapter, as Baby Yoda might have made a lot of people nervous when he was left with the frog couple by Din so that he could help his fellow Mandalorians. In fact, BY was even being shown how to care for the tadpoles when Din came to pick him up, so hopefully this alleviates any further concerns from those that were triggered by the last episode when BY was snacking on the UNFERTILIZED eggs. Anyway, moving on, it would appear that Din wasn’t too happy when the three Mandalorians removed their helmets to reveal themselves, but as Bo-Katan, yes, BO-KATAN, played by Katee Sackhoff, and her fellow Mandalorians speak to Din they come to the understanding that he’s been raised into the Mandalorian culture by those that are trying to bring back the old ways, to which Din, of course, replies that there is only one way. Anyone that’s read the Legends canon or watched the Clone Wars will know by now that Mandalorians aren’t as united under one cause as some might think, since they’ve splintered into more than one faction over the years. But one thing is clear, they stick together when things get tough.

This was no doubt something that Din was willing to do even if it didn’t suit his plans, since Bo-Katan and her companions were content to harry the Imperials in her quest for the darksaber, as it’s a belief that she can use this to rally her people, even after the realization of what the Empire did to Mandalore. If it’s not already obvious, the Mandalorians don’t bow to anyone but their own, and they don’t like being ruled, which means that their relationship with the Empire would have soured no matter if they had agreed to become their allies since the Empire tends to take what it wants and demand complete obedience from others. But as it’s shown in the chapter, four Mandalorians are more than enough to take on a squadron of stormtroopers, which makes it hard to think that a warrior culture such as this would fall to the Empire without taking a humongous chunk of their forces. Of course, when the understanding is that the Empire has unlimited resources, it would be difficult to think that even the Mandalorians, who are specialists in a sense, would be able to hold out for long.

But one of the highlights of the chapter, apart from the reveal of the three Mandalorians, came when Bo-Katan revealed the location of Ahsoka Tano and even spoke her name aloud. As one Star Wars nerd among many, my heart definitely skipped a beat when this was mentioned since it’s already been stated that Ahsoka won’t be featured that much in this season, but any sighting of her is bound to make a lot of Star War fans happy, especially since this would mean that Din’s search could be coming to a head, and the fate of Baby Yoda might be hanging in the balance. Is anyone thinking that the two of them will be parted at this time? There’s a lot to think about for the next chapter in Din’s tale, but trying to imagine him without Baby Yoda at his side is kind of difficult at this time. We’ll have to wait and see what next week brings.