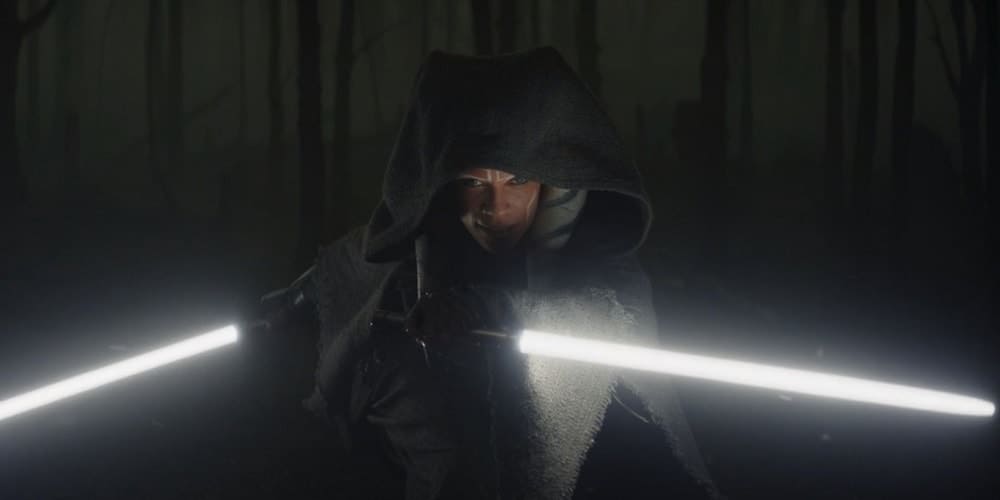 Things are heating up in a big way on The Mandalorian yet again as more and more Easter eggs are dropping and one BIG name drop came during the end of the fight between Ahsoka Tano and Morgan Elsbeth when Ahsoka asked where Grand Admiral Thrawn was. That’s right, THRAWN, a name that many Star Wars fans have been hearing and know much about since the blue-skinned Chiss has been a part of the animated series for a while and the books detailing his rise to power have been rather popular in many circles. To even think that he might be coming to The Mandalorian is insane and intense since the character is one that has been popular for some time now among Star Wars fans, but seeing him in live-action could be another jolt for the show that people weren’t expecting but would definitely find intriguing. Then of course there’s the revelation of Baby Yoda’s name, Grogu, and the fact that he remembers more than anyone realized since he was raised in the Jedi temple, which raises even more questions and the possibility that people might start putting one and one together and come up with the idea that perhaps Yaddle or Yoda had an indiscretion or somehow transported the kid to the temple and he was a well-kept secret. Grogu apparently can commune in the Force with another Force-user as it was seen with Ahsoka, and as a result it was established that he’s been hiding his knowledge and power in the Force save for those times when he really needs it. If the kid was taken from the temple during the Purge it’s easy to think that fear and uncertainty would have played a big part in the dampening of his abilities.

But getting to Ahsoka now, the performance put on by Rosario Dawson is likely to split some Star Wars fans since from her appearance to her aggressive attitude some folks might claim that this isn’t the Ahsoka they wanted, but to be fair, she’s grown now and far less idealistic than she was as a padawan. To be even more accurate her illusions were shattered a long time ago when she was booted by the order and it’s easy to think that as strong as she is in the Force and as much as she’s kept up on her training, she’s not the same person she was when Anakin took her on as a padawan. But her feud against Morgan Elsbeth and her mention of Thrawn makes it evident that she’ll be back eventually since it’s already been stated that she wouldn’t be a big part of this season but could return in season three as the story progresses. But as we saw, she’s not the one to take in Grogu since the little guy has taken a liking to Din, who has become a father figure. That kind of leaves it up in the air then as to where the two are headed when it comes to the endpoint of the story eventually.

But even better, and this definitely softens any disappointment, is that Ahsoka pointed Din towards Tython, another name that a lot of Star Wars fans should know since it’s essentially the birthplace of the Jedi order, where the knowledge of the Force as it exists now first came to being for those that would found the order. Perhaps the Mace Windu theory is still sound enough to work since Ahsoka told Din to locate a place of power where he could set Grogu and allow him to converse with the Force. She stated that a Jedi might be listening and could very well appear. That of course could mean just about any Jedi that survived the Purge and might still be around, but a lot of people are no doubt going to be holding on to the idea that Windu could be somewhere in the galaxy at this point since the idea is that we did not see him perish as we did with the other Jedi. Yes, he was flung out of a window, but with the power he possessed and the fact that a fall within Coruscant’s heights offers a long time to drop, it’s possible that his adrenaline could have kicked in and he would have been able to save himself.

The Mandalorian cast keeps getting better, but the use and loss of great actors such as Michael Biehn is kind of regrettable since he could have likely been someone that the show could have used later on. Placing him as a grizzled old veteran and mercenary was kind of cool, but the moment it appeared that he was trying to use a false surrender made it clear that he wasn’t going to see the end of the episode. Plus, the fact that Din took out an HK assassin droid is just too cool since a lot of fans probably remember just how deadly such droids can be. If anyone is doubting that the finale for this season is going to be great then they might need to watch the season from the start again to see how it’s been building up, since it’s just getting better with each chapter.