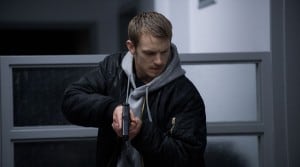 Last night’s episode of The Killing is The Killing that I love. It possessed those awesome, real moments between characters on the show that I really cared about it, while also moving the plot along nicely and weaving together multiple stories under a single theme. “Scared and Running,” the fifth episode of this season, was all about forgiveness, for crimes both big and small, and it continued the extremely strong start that The Killing‘s third season has had thus far.

The best part about last night’s episode of The Killing was the interaction between Linden, Holder, and Bullet. Linden and Holder are always great together, but by adding Bullet to that mix as well, The Killing gave viewers a fun and new dynamic. These scenes provided more depth to Bullet’s character, making us care more deeply about her; her short scene in the car with Linden about smoking was funny and charming, while the silent embrace between Bullet and Holder, after Holder flat out tells Bullet that Kallie is most likely dead, illustrated their ever-deepening “parent-child” connection.

Along with those great moments, we also got to see Linden come to Holder’s apartment and end up meeting his new girlfriend, Caroline, played by Jewel Staite (AKA Kaley from Firefly). This scene initially had the typical, fun, back-and-forth rapport that all Linden-Holder scenes in The Killing have. However, the scene became a lot sadder and more enlightening when Caroline gives Holder his Valentine’s Day gift, and he is forced to mutter some hackneyed excuse about why he doesn’t celebrate the holiday in response because he clearly forgot. Then Holder is forced to answer his cell phone and head out onto the job with Linden, while Caroline is left alone at the apartment, clearly upset.

While all these situations are great examples of forgiveness found throughout “Scared and Running,” it is Ray Seward’s storyline that really hammers the message home. As Ray and Alton discuss whether 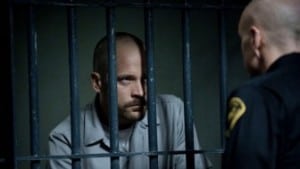 or not they think the families of the individuals they murdered can forgive them, we soon see that Ray cannot ask for forgiveness because his guilt will not allow him. When he is given the opportunity to finally see his son, Adrian, Adrian’s foster mother tells him that “He forgives you,” and Seward just gets up and walks away. Everything Seward has done is unforgivable for him, and there are no words or actions that can change that.

Near the end of the episode, we, along with Seward, discover that his fellow inmate, Alton, is in prison for the murder of his parents, but that now, years after it happened, his deepest, sincere apology is enough for the rest of his family to forgive him. In a similar way to Alton, The Killing is just a show looking to be forgiven by viewers for the missteps of its past two seasons, and so far, with the first five episodes of season three, The Killing is making one hell of an apology.