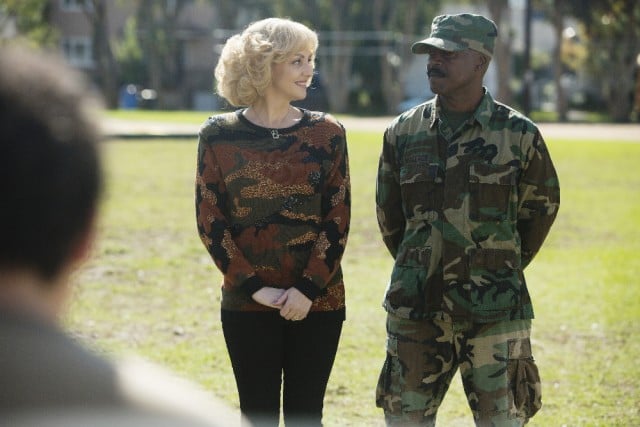 This season of The Goldbergs has delivered great episode after great episode, so let’s jump right in and take a look at this week’s entry, “Wingmom.”

The main story in “Wingmom” deals with Barry deciding to join the ROTC because of his love of the movie Top Gun. He needs a signed permission slip, though, and, of course, Beverly refuses to sign. As long as he keeps it from his mother, though, Murray (who was also in the ROTC) agrees to let him sign up. Things obviously don’t go as well for Barry as he thought they would, so he recruits Beverly to get him out of it. The rules won’t allow that, so Beverly enlists as her son’s “Wingmom,” something that also isn’t what Barry wants. Murray finally has a talk with his wife that convinces her that it’s important for their son to finish what he’s started and really accomplish something with his life, and she loosens the string connecting her and Barry more than ever before.

Elsewhere, Adam and Pops sit in on a timeshare presentation at the mall in order to get some free movie tickets. Unfortunately, the presentation is more convincing than expected, and Pops ends up buying a property in Florida. This scares Adam, even though he won’t entirely admit it, because he’s afraid that Pops is older at heart than he tries to convince his grandson he is. Adam starts spending time with Pop-Pop in order to make Pops jealous, but this just ends up causing an argument between the two grandfathers that forces Adam to disown them both as his “pops.” In the end, Adam and Pops make up, and Adam also realizes that it’s important for him to cultivate a real relationship with both grandfathers instead of with just the one he knows best.

“Wingmom” is yet another solid episode of The Goldbergs this season that the cast and crew have churned out, and I’m so optimistic that the best is still yet to come.

What did you think of “Wingmom’? Has this season of The Goldbergs been delivering for you? Let us know your thoughts int he comments down below!