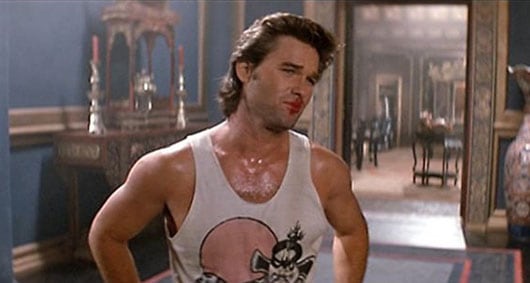 Kurt Russell is the kind of guy you could easily call a man’s man. He’s been in some of the greatest movies ever made and he’s taken on a few roles that are easily some of the best ever created. The mere fact that he’s been around so long and that he’s a favorite actor means that he’s done something right and he’s done it in a way that shows how talented and how truly awesome he really is. His characters usually tend to be the cocky, wise-cracking lot that are either serious as a stone or carefree and just love to do things their own way. When he really gets into the part though you can tell since he’s the kind of guy that actually becomes the person he’s playing in a manner that’s different from any of his other roles. That’s why he’s one of the best, and one of those few that will no doubt be remembered for a long time to come.

On his own as Wyatt Earp, Kurt would have been awesome. But he got to be epic when he had a cast such as Val Kilmer, Sam Elliott, Bill Paxton, Michael Biehn, and Powers Boothe to star with. This film was so full of stars that it was hard to fit them all in at times but it managed to tell a version of the Tombstone story and the gunfight at the OK Corral that was entertaining even if it was another version. His pairing with Kilmer, who played Doc Holliday, was simply inspiring since the two played off of one another in a way that isn’t always possible in movies such as this. But throughout film history this is likely going to go down as one of the best.

Believe it or not Bull isn’t really a good guy in this film but he’s seen that way by many people. When it comes to his job he’s the boss and he’s the guy that you need to impress, but otherwise when he’s not on the clock he’s kind of a jerk and doesn’t care who knows it. He’ll run into just about any fire and never flinch, but when it comes to his home life it’s just a mess. He takes too many risks, he pushes people away, and even his own brother can’t stand him half the time but they’ll at least speak to each other occasionally. Bull is that guy that has a heart of gold but won’t show to anyone for his own reasons.

Dean is that guy you know that’s fun to be around, is good at his job, and yet still is horrible at handling his personal life. He has four boys that are a severe discipline case, his house is always filthy since he’s out hustling for jobs, and his prospects of finding a woman seem dim at best. But when he decides to get revenge on a woman that not only refused to pay him for a job well done but also threw him off her yacht, Dean decides to get a little payback when she turns up with amnesia. His instant wife though becomes something he never expected as she quickly learns how to live with what they have instead of what she wants.

MacReady is the guy that’s out on the ice for a job and that’s about it. His level of trust has more to do with the paycheck and the fact that he knows some of the guys he’s with rather than the fact that he’d go out on a limb for any of them. When the Thing comes traipsing into their midst however it becomes clear that no one’s to be trusted, not even those that have been at the station for a long period of time. As the creature starts taking over one person after another and making it hard to figure out just who’s who MacReady takes whatever measures he can in order to make certain that he’ll be one of those left standing.

Jack Burton is the guy you want with you when the lightning strikes and the pillars of heaven shake. He’s not much for believing in the mystical acts that go on during this film but he is the kind of guy that believes what he sees and what he sees throughout his adventure on this hilarious and somewhat campy classic is enough to make an ordinary person’s head spin a few times. Not only does he go up against three godly individuals that fling him around the room like a rag doll, but he also ends up taking the life of a powerful sorcerer with a little bit of luck and one very good knife.