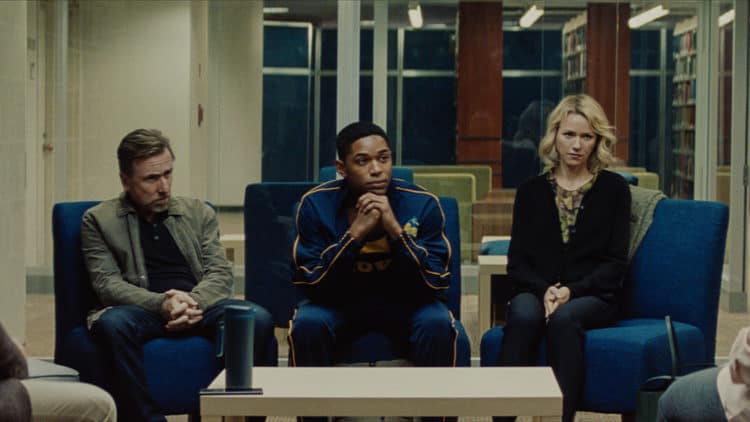 In the midst of a busy summer of 2019 came Luce, a provocative independent drama starring Kelvin Harrison Jr., Octavia Spencer, and Naomi Watts about an adopted Black kid who’s the perfect role model. However, his liberal-minded parents are forced to reconsider the image of their adopted son after he writes a troubling essay about why violence is a necessary cleansing for a class assignment. From there, the narrative slowly begins to unravel about who Luce truly is and the pressures surrounding his world are explored to great effect. If you haven’t noticed in the past several years, movies and television have been flooded with programs about the “black experience”. Exactly what is the black experience? It’s films that examine the struggles of Black Americans when it comes to racial profiling such as Police Brutality or the unfair treatment of the justice system. Granted, an examination in regard to these topics is nothing new; In fact, Spike Lee is the man that truly brought to light the hardships that Black men must deal with in Do The Right Thing. Jon Singleton only reinforces these problems in Boyz in Tha Hood; Both films do an excellent job at tackling the subject at hand and should be watched if you somehow missed them. However, Luce doesn’t follow that route. It does touch on racial profiling, but in a way that’s rare in films or television. When it comes to Black men, there’s a stereotype that’s perceived when you carry yourself in a certain manner. Luce is pretty much the poster boy of what most Black Americans want to be seen as. A student who gets excellent grades and is a tremendous athlete all-around. Luce’s life is seemingly perfect, but that’s what makes the film great.

It explores the pressures society puts on young Black men who must transcend past the negative stereotypes that have weighed them down for so long. The film does a superb job of putting a spotlight on the way we treat people like Luce vs. one of Luce’s friends, who appears to be the exact stereotype that’s seen as a negative in the public eye. But it also gives a voice to the impact that we put on the perception of people entirely. Luce just wants to be a normal teenager who likes to drink, smoke, and have fun with his friends, but he can’t. He understands that he’s the good poster boy and is forced to conform to something that society will accept him as. Luce is an extremely tricky role to pull off, but Kelvin Harrison Jr. is perfect here; He’s playing somewhat of a Jekyll & Hyde role, where’s he supposed to seem like a good and honorable kid, but he’s also a cunning and manipulative young man who knows how to work the system. Easily, this role could’ve slipped into cartoonish territory as there are moments that it definitely has an “only seen in films” type sequence, but Harrison Jr. is up for the challenge and he excels as the title character.

Not surprisingly, Octavia Spencer is great in her part and it’s nice that she isn’t painted as a one-note villain. In fact, I wouldn’t even call Spencer a villain in general. She’s definitely the antagonistic force that’s trying to disrupt Luce’s life, but the role is so well written that you understand her motivations and actions. Harriet isn’t trying to ruin Luce’s life. She’s trying to get him to understand how the world will see him if he acts in a certain manner. The scene where Harriet’s sister Rosemary – who clearly has a mental disability – is a striking one because she’s also forced to shun her sister due to the negative shadow that Rosemary casts. Luce asks uncomfortable questions and though the film is far from perfect, it definitely gets you talking about the themes examined here. I can’t forget about Naomi Watts and Tim Roth. While they’re roles aren’t as layered as Luce and Harriet, they’re still important in overall context of the story and these veterans are more than up for the commanding task. Luce is an excellent film that addresses the subject of racism in a different manner. It’s sharply written with several great twists and turns, expertly acted by a cast of both veterans and newcomers, and it has a refreshing story that isn’t seen in the public all too much. If you haven’t seen this great drama, then it’s something you need to check out.