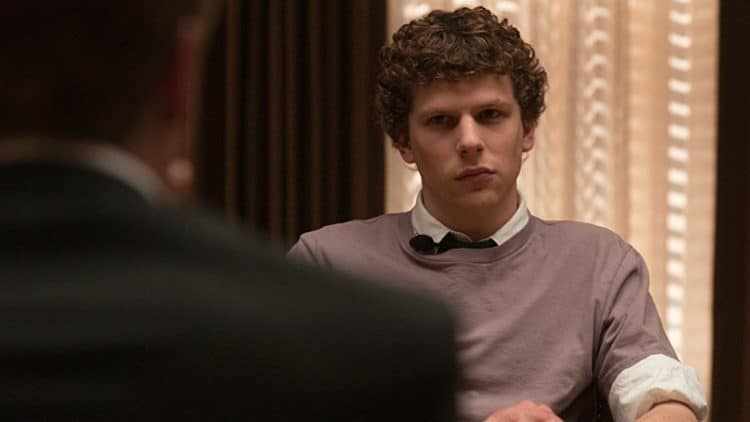 If you’re wondering if Jesse Eisenberg is just a brilliant method actor or is really acting like himself in some of his movies then you should know that it’s the former more than the latter. He has suffered from anxiety in the past and is kind of controlling in what he does since he does like to have a certain level of authority over the aspects of his life that he considers his own. So when you see him acting out a character on screen it’s safe to assume that part of who he really is has come through and is running the character just as much as other parts of him are. The whole idea of a lot of his characters is that they have trouble fitting in to society in some way and are in some way not entirely capable of acclimating to the world around them with as much skill as others do. But this makes him an interesting character as well as a good actor since it keeps people guessing a lot of times.

Here are a few of his movies that can be considered among his best.

A stoner that works in a convenience store and doesn’t have a lot of prospects other than sharing his life with the woman he loves and getting high on occasion is someone you might think stepped right out of Clerks or some similar movie. But instead of that same old chestnut the twist is that he’s a secret weapon that’s been trained by the government and implanted with false memories. The other twist is that his girlfriend is really his handler, but has fallen in love with him during her assignment and is now entirely protective of him. Once he’s been activated however the fun really starts as two CIA operatives that are actively working against each other are in a race to see whether or not the asset will survive.

4. The Squid and the Whale

One thing about a divorce is that it’s sure to be harder on the couple’s children than anyone. Some divorces go off without as many problems as you would expect, but others aren’t quite so lucky. For Frank and Walt, the two brothers involved in their parents’ separation, things get downright aggressive as they both start exhibiting behaviors that are way past the norm for them and finally take the efforts of a psychologist to analyze and figure out. In the end Walt figures out that when he’s away from his father’s influence he’s a much calmer and less egotistical person, which makes him contemplate just where he wants to go from that point on.

Relationships are a very hard thing to follow sometimes and the ‘he said, she said’ kind of attitude is something that’s very difficult to get past, especially when it runs rampant among one’s coworkers. James isn’t unsure of what he wants to do in life or where he wants to go but the uncertainty of how to get there is something that plagues him the whole way through the movie. Getting from point A to point B in a relationship is usually something that you don’t map out, but trying to survive and actually make your way through the emotional muck that can accrue at times is a heroic effort that many people make regardless.

A lot of people have stated that this film didn’t follow the facts as well as it needed to and that some things were changed as a means of making the movie stand out more than it might have had it otherwise been true to the letter. At this point we all know what Facebook is or have at least heard of it, and a lot of people know that it’s something that millions log onto every day and can’t seem to live without. But think about what it was before it ever got to this point, when it was still just a program waiting to be developed, or an idea that was waiting for many people to cry ‘foul’ when they realized they’d been left behind in the idea phase.

Illusionists are skilled individuals to be sure since they work on the premise that you’re going to be looking for their secret and will thus guide you down the path that your senses want to go. In this manner they trick you before you ever even realize that you’re seeking the answer, since the idea is to catch an illusionist in the act. But that’s kind of hard to do with someone that’s been trained to be several steps ahead of you before you’ve even taken the one. In this film the Four Horsemen are the types of skilled tacticians and street magicians that rely on the desire of the people to look as closely as possible, because then it’s that much easier to fool the senses that aren’t watching what’s behind the trick.

He might act in similar ways in a lot of his films but Jesse has made his anxiety and need for control work for him throughout the years.