Home
Video Games
The Dark World: Karma Is a Mix of Psychological Horror and Sci-Fi 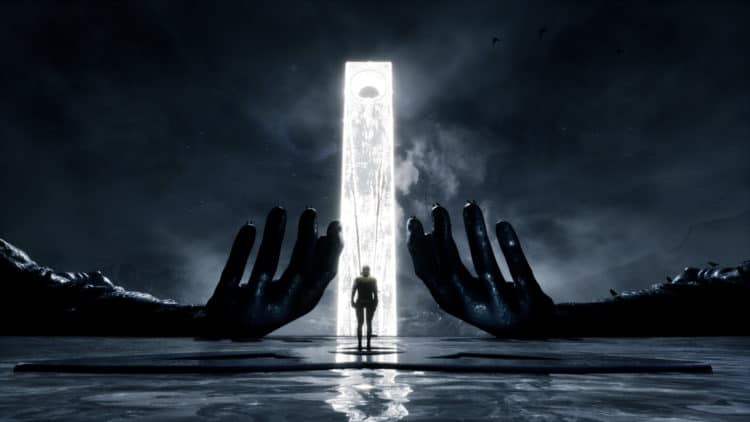 The Dark World: Karma is a survival-horror game that is heavily focused on story and mystery. It is currently in production by Pollard Studio LLC. This brand new IP has many people scratching their heads on what exactly it is about. Even though everything seems pretty cryptic on what the basic premise is, this game is garnering some attention. Players will take control of an investigator named Agent Daniel whose mind is splintered into various pieces of lost memories. He must recollect his broken mind and remind himself who he really is to fulfill his destiny. It appears that this title is played through first-person perspective and environmental narrative will be key to progressing through the story.

This game will be a very psychological journey that will be reminiscent of The Medium and even Psychonauts in some ways. Evidently, according to the trailer, the main protagonist of The Dark World: Karma has been searching for their true identity for eight years. The story will take place in Shrouded City. It is a vast metropolis that has been corrupted by a company called “Leviathan Corp.” This city is a gloomy and grim place that’s inked in shadows and tattered in grit. It almost has a Blade Runner motif to it, minus the neon undertones. The twist here is that Agent Daniel can only pursue their mission at night. Why? Well, that’s just an additional reason to check this game and find out. There are many layers to be peeled away and this IP may not be everyone’s cup of tea. Needless to say, it is good to see developers taking a new approach to the survival-horror genre that spans beyond just fighting zombies and exploring twisted alternate dimensions.

This is not to say that this game won’t have monsters, because it will. Thus, there will also be fleeting experiences happening around the environment at all times. Surroundings will warp and change on a regular basis and players must have keen eyes and sharp minds to keep track of what is going on. It is almost like an ever-changing shifting puzzle that will constantly pull the rug out from players’ feet. There will be a “dream-like” flow to the areas in which Agent Daniel won’t be able to tell what’s lurking around the corner. Things won’t make sense in the traditional way of how the physical world works. At the start of the game, Agent Daniel has been awakened from a coma with the aid of a mysterious old man. After glaring into a mirror, it is clear that Daniel isn’t necessarily human. He almost appears to be a walking corpse that has a mobile life support system engrained into his body.

The only clue that’s available is a tape that has strange mixed messages on it. Daniel must use this tape to help find out where to go to reclaim his memories and discover what happened to him. Sound will play a pivotal part in the gameplay. He will be highly advised that players experience this game with HD headphones to fully immerse into the experience. Little audio clues will signify the changes in the environment and possible dangers that are hidden. On top of the wicked sound design, the music will be composed by a real live orchestra. Players will be bombarded with various audio cues that will point out where to go and what to do. It will almost be like a HUD in aerial fashion, which will avoid the standard highlighting and icons that clutter the screen.

With The Dark World: Karma, one of the most interesting features that will be available is called simply, “Dive.” According to the trailer, Agent Daniel will be able to don a Cerebo-like helmet that will enable him to jump into other people’s minds. It is currently not known that if players can do this on a whim, or it is set up to be an established mission selector. What is stipulated is that players will be able to explore other people’s minds to find important information about Daniel’s memories. Chances are, there will be all manners of environments to discover that will range from the beautiful to the obscene. Of course, this is most likely where the changing environment aspect of this title will most likely be utilized the most. One would assume that the level designs associated with the “Dive” will echo the patterns and behaviors on how dreams and memories work. Shifting from one place to the next, accompanied by horrors that lurk in people’s psyche.

This almost sounds like the movie The Cell, which could be a good inspiration for The Dark World: Karma is formatted. It is not currently known how the combat will work in this title. Chances are that this new IP will generally stick with hardcore survival-horror gameplay mechanics. Which centers around simply avoiding and hiding from enemies as opposed to engaging with them. The entire sub-genre of survival horror can be a bit vague, at times. Some games like Resident Evil are considered to be a part of this category, let they can be action-packed. Meanwhile, other titles like Amnesia are simply about dodging detection and gathering clues to find a way out. From what was seen on this trailer, chances are that The Dark World: Karma might be the latter.

Pollard Studio LLC is deep into development with this project and it is looking promising. Even though the survival-horror category of video games is becoming crowded, this title does have some freshness to it. It seems to be beautifully crafted and has a depth that can offer hours of replayabililty. Currently, The Dark World: Karma is set to be a PC exclusive and there is no word on whether this will shift to consoles. This game is set to be released sometime in the second quarter of 2022. Any player that is yearning for a dark adventure that has Orwellian undertones and will provide perpetual brain-teasing should take a look at this title.