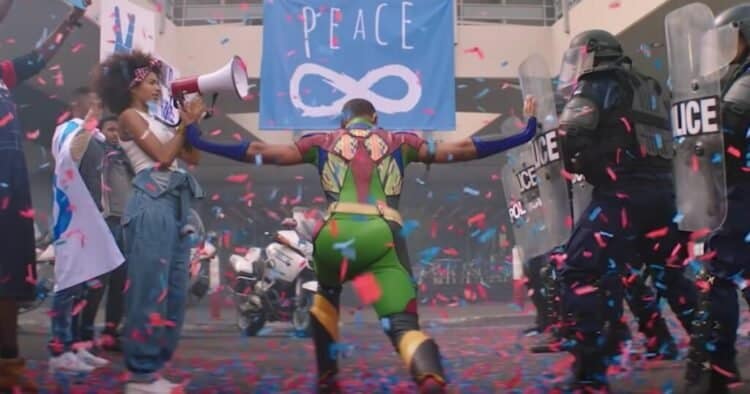 Just when you think that The Boys can’t get any crazier…well, you know how that goes by now. But if you’re not into spoilers then you might need to stop reading and watch the current episode before trying to join in on the conversation. But if you’ve seen it then you know that the team appears to be fragmenting in a big way as Butcher has already been taking Compound V, but now it would appear that Hughie felt the need to take a taste, even after Butcher refused his request. Things are getting worse and worse for those that are willing to stand against Homelander’s rise to power, and unfortunately, it would appear that part of it is the fault of the conspirators that are looking for a way to bring him down. After all, Homelander is the type of individual that can hear just about everything within a given vicinity and isn’t known for being a patient individual. Unfortunately, he’s not the only one that’s helping to keep Vought on top, as Ashley is firmly engaged in the plot to keep Homelander on top and keep her own position secure.

In the meantime, Butcher and the others are hot on the trail to find out what killed Soldier Boy and are sent to Russia to do a favor for the person that can help them. Unfortunately, Frenchie and Kimiko are starting to question their role within Butcher’s inner circle, as they’re convinced that he’s using them as weapons and lackeys and not much else. When Kimiko has to make her way to a Russian oligarch’s home, in disguise as a call girl no less, things pop off in a very big way when she kills the oligarch with, get this, a dildo from the guy’s collection that is crafted in the likeness of Black Noir. Blood flies in all directions as Kimiko finishes the oligarch and his bodyguards but is then shot in the head by one of the girls out of fright.

After healing, Kimiko is noticeably uncertain about her future with the group, and she and Frenchie discuss life away from the group, about spending time in Marseilles, as a way of escaping. It’s very easy to see that the team is on the verge of imploding as Butcher’s actions have been reckless and extremely dangerous, but it’s also not too hard to figure out why Hughie would risk his own life by taking the compound, as he’s been the weakest member of the group since the show started. Getting just a taste of what it’s like to be super strong, super fast, and nearly invulnerable is a type of high that might change him in ways that people aren’t ready to see, or figure might be worse than Butcher. But after a heated confrontation with Homelander, who couldn’t help but goad Hughie and subtly remind him that he’s not even a blip on Homelander’s radar, it’s easy to think that Hughie was looking for a way to get even. This episode is a bit of a mess since A-Train is now worrying himself with social justice, while Ashely is doing everything she can to undermine his every idea.

The Deep’s wife only makes it worse when A-Train mentions his decision to step into the social justice circuit, only for The Deep to parrot his wife’s text message and distract everyone from A-Train’s line of thinking. In other words, Vought and all those working under the company’s banner are at the mercy of what Homelander and Ashley want, especially after Neuman betrays her boss, Stan Edgar, to keep Homelander happy. The leader of the Seven then makes it clear to Starlight that he knows about her plans for an insurrection, and after showing her the charred and very dead corpse of her friend, Supersonic. He then makes it worse by telling her that the next time she plans to overthrow him, the next victim will be Hughie. Are there any other reasons to absolutely despise Homelander that we haven’t heard about yet? As of now, the guy is an absolute nightmare, since he’s not only killed anyone he wants but he’s made it clear that he’s not quite as dumb as people think. But he is every bit as cruel.

How the rest of the season is going to shape up is anyone’s guess, but right now it would appear that Butcher might need to really step it up and face off against Homelander, or find a way to get Soldier Boy to do the job and save everyone. But with a super that can do just about anything and has no known weaknesses, it’s going to be tough to find anyone that can stand up to him for more than a few seconds. Soldier Boy’s been out of commission for a while after all, but maybe his new power will give him a much-needed edge.