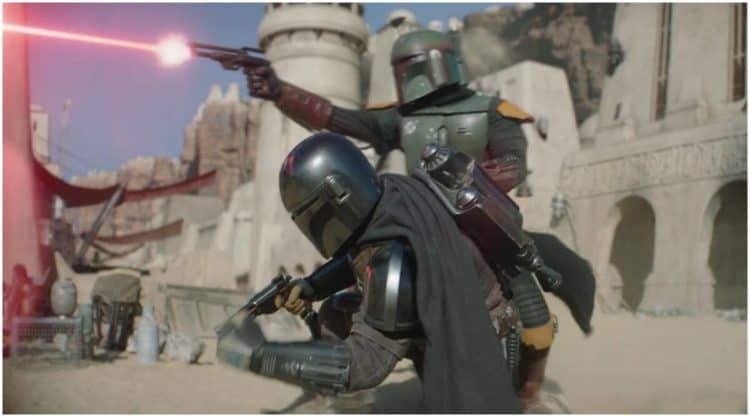 It’s a fitting end to a show that was nearly entirely hijacked by another series that people have been waiting on for a while, and despite any criticisms of how it ended, the finale was quite enjoyable since it brought several loose ends into play and made it clear who sided with who and what had happened to each character. There was a surprise at the end, however, and yes, spoilers are coming just to make certain that people understand. It does sound as though Disney+ might be toying around with the idea of a second season, but it might end up repeating itself as the type of show that caters to other stories while still pushing its own idea forward, much as this season accomplished. There are plenty of other shows coming to the Star Wars franchise at this time and it’s easy to think that several of them might coincide with The Book of Boba Fett at one point or another. But getting back to the finale, it’s fair to say that this ended about the way that people might have been hoping it would.

The emergence of Cad Bane threw a lot of people for a loop since the Clone Wars-era bounty hunter wasn’t really expected to run with the Pyke Syndicate. But considering his profession it’s not too surprising. It was kind of a shock to see Cobb Vanth go down as he did, but as I said, there’s a surprise at the end of the finale in the post-credit scene, and it would appear that Cobb is going to be getting an upgrade of sorts. In the meantime, the war that went on in the streets of Mos Espa was about as fierce as one would have thought it would be, with Din joining the fight along with the younger folk that Fett recruited, and the people of Freetown. Things looked a bit hopeless for a while when it was made apparent that the other ruling families proved that they couldn’t be trusted thanks to their alliance with the Pykes, but one has to remember that this is Boba Fett that they were dealing with, and along with Din, Fennec, and Krrsantan, the rest of the group that followed or were there to help Fett were more than capable.

That was until the massive, shield-bearing droids joined the fray, as this made the fight far more uneven since their shields were impossible for even the darksaber to penetrate. What was interesting was that Krrsantan figured out how to penetrate the shields, but was knocked down before he could make it work. When Fett made his way back to the palace to bring his rancor into the fray, however, things picked up in a hurry as the beast decimated one of the droids and then the other, but when Fett was knocked off the beast’s back, it proved to be difficult to calm the rancor down again, as Din wasn’t able to take control of the creature despite his attempt, and the creature even tried to eat him before finding out that his beskar helmet didn’t bend under the pressure of its jaws.

Grogu, who apparently made his choice to return to Din’s side, had no issue calming the beast down though, as he used the Force to bring the rancor to heel in the most peaceful manner possible. The Pykes almost became a secondary thought as the battle concluded shortly after the rancor entered the scene. It became even less of a thought when Fennec caught up with the leaders of the ruling families and executed every one of them along with the leader of the Pykes. In short, Fennec made certain that the families and the Syndicate would be certain that messing with Mos Espa wasn’t prosperous or wise. One has to wonder if the Pykes could return in the second season to gain a bit of revenge for their loss, but the practicality that the Syndicate operates with might keep them from making such a move, especially if Fett now commands Mos Espa entirely. That would be something to see in a second season, especially given that Fett and Shand are seen walking the streets freely without being attacked near the end.

Perhaps one of the best parts of the fight comes near the end, however, when Fett and Bane finally come face to face to settle the final score. Cad proved that he’s still just as quick as ever, and his ability to fend off the rancor was impressive, but it was when he came too close to Fett to finish him off that he made a serious mistake. Taking the weapon he crafted with the Tuskens, Fett defeated Bane at every turn, knocking him to the ground before impaling him on the end of his weapon. Whether this will actually end Bane or not is hard to say since we didn’t get to see the bounty hunter laid to rest or disposed of in any way, but if he is brought back somehow it probably wouldn’t disappoint anyone. Now that the season is over though, it’s very easy to think that people are going to be wondering what will come next.