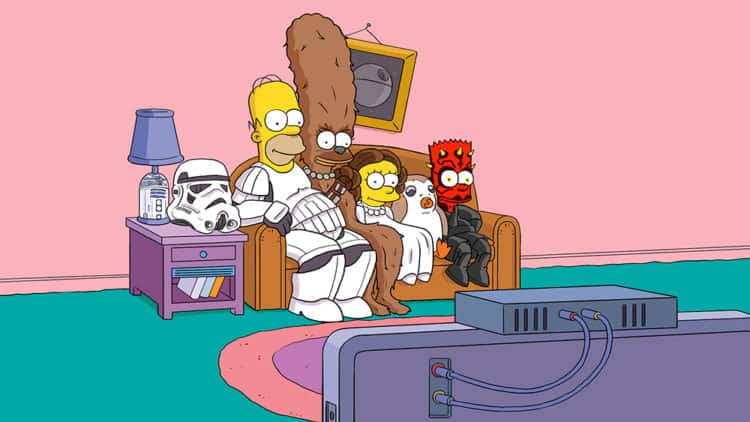 It makes sense doesn’t it to feature the Simpsons and Star Wars together since they both belong under the roof of the Mouse House now, but something about the Simpsons has resonated with Star Wars in a weird way for a long time for one reason or another. Simply put the Simpsons have taken a little bit of pop culture from various directions throughout the years and made it work and Star Wars was just another bit that was bound to fall under their influence after a while. Adam-Troy Castro from SyFy has a few things to say about this. Seeing different characters dressed up as Star Wars characters is hilarious since some of them make a great deal of sense and others are just insanely comical in their appearance. The idea that Bart will always idolize the troublemakers and possibly the bad guys is kind of a no-brainer while Lisa will always idolize the strong female characters. Ever wonder if we could see her dress up as Rose Tico since the show is still going? It might be kind of an interesting nod to the character and could make a lot of fans laugh since it would be a dig and a bit of respect at the same time. But bringing both the Simpsons and Star Wars under the same roof is something that feels as though it was destined to happen at some point since both franchises are immensely popular and can compliment each other in a big way as well.

The thing about the Simpsons is that they’ve parodied so many different areas of pop culture that it’s a fleeting thought that Star Wars isn’t anything special and it’s basically just another bit of an episode that flew by. In truth the Simpsons has paid great respect to Star Wars just as it has so many other parts of pop culture that it’s been influenced by and has managed to influence in turn. For longer than some people have been alive the Simpsons have been a huge part of pop culture and as such have had a big hand in changing things around as their show has continued forward for so long that it’s become an American icon and something that we can’t really see ourselves doing without. Stephen Dowling of the BBC has more to say on this subject. Star Wars is the same way since it too has influenced a great deal of American culture, in fact worldwide pop culture since it’s been so prominent from one continent to another. Both properties have gone much, much further than their creators ever thought might be possible and to think they both came from very simple ideas that  began to expand and grow upon being received by the public is kind of fun to think about.

Does anyone remember that the Simpsons started off on the Tracey Ullman Show? Or how about the fact that many of the characters in Star Wars almost looked very different and the story itself could have gone a much different route? The early times of both franchises were hard to gauge since they were unknown, they weren’t entirely trusted yet, and the interest of the people had to grow and expand as things were put into motion. As the proverbial ball got rolling however both franchises eventually found their stride and began to really pick up speed. Of course Star Wars came first and had a lot more time to grow and develop, but the Simpsons took those pop culture references in stride and kept moving forward as the show adapted and evolved in a way that continued to absorb and reflect the many other parts of pop culture that were added in and used from time to time in various ways to make the show more appealing. From the opening scenes of the Simpsons to the couch scene to the very episodes that were rolled out it’s usually been obvious when Star Wars is on the rise if people aren’t paying attention since the Simpsons picks up on the story in a big way and starts to spread it around. The many different references that the show makes throughout the years is evidence that those that work on the show are Star Wars fans or at least understand the importance of jumping on that particular trend when it’s still hot. Of course it could be both but chances are that the Simpsons crew does feature a few scifi fans that had a great deal of fun coming up with various references in several episodes.

Whether the Star Wars references will come hot and heavy now that both franchises are under the Disney umbrella is hard to say since the Simpsons still rely heavily on their own material as well as the broader spectrum of pop culture that’s out there to be drawn from. But it’s fair to say that we’ll see more references as time goes on as Star Wars is still a very hot commodity.