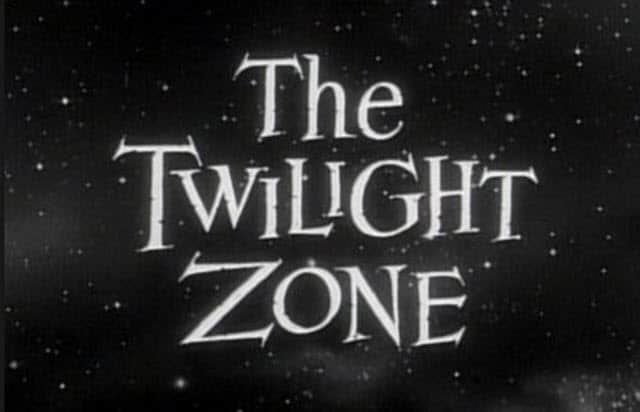 While the golden age of television gave us many gems that we continue to enjoy today, one of the most innovative and artistic was The Twilight Zone. In fact, according to Caryn James from BBC, “Few TV programs have had the enduring cultural impact of The Twilight Zone, whose very name is now shorthand for being in a bizarre, irrational situation.” In addition, Entertainment Weekly’s James Hibberd states that “For Twilight Zone fans, that phrase is all you need to hear. The sci-fi anthology classic is not only one of the most loved, groundbreaking, and acclaimed TV shows of all time, it’s arguable one of the most distinctive.” Even for those of us who first encountered the show in rerun form as children, the iconic images and storylines have become a part of our cinematic reality and continue to influence our entertainment choices as adults. Below, we count down the 10 best Twilight Zone episodes of all-time.

Our first spot belongs to “Nightmare at 20,000 Feet.” This iconic episode features William Shatner as a character who notices a creature has hitched a ride on the wings of the airplane. This episode is an adaptation of a short story by well-known author Richard Matheson. Although the episode, and Shatner’s performance, are both considered fairly comical when viewed now – the episode still deserves a spot on any countdown. It’s iconic imagery has stuck with viewers for decades and was the inspiration for two movie adaptations.

Our number nine spot belongs to “The Midnight Sun” – an episode that deals with the end of the world due to earth being plunged closer to the sun. Although set in New York City, the main characters are struggling to survive desert-like (and steadily rising) temperatures as well as increasing isolation, dwindling resources, and the possibility of violence from looters. Modern viewers can view this episode as a cautionary tale in relation to “the greenhouse effect.”

Our next selection is “Eye of the Beholder” which focuses on a character by the name of Janet Tyler. Janet has been obsessively undergoing treatments to correct her “ugly” visage. In classic Twilight Zone style, the shocking twist at the end shows that the main character is traditionally beautiful, while we see all the other characters have deformed and misshapen humanoid features. Not only is this entertaining episode successful in helping viewers question the superficiality of beauty culture but has also been praised by critics for its cinematic merit. This is because the producers often spoke about the difficulty in filming the episode as it required strange angles to keep the characters faces hidden.

The number seven spot belongs to “The Obsolete Man “ – an episode set in an eerie dystopian society where individuals can be tried and put to death for being judged as “obsolete.” The main character, a librarian by trade, receives said judgement as books have been outlawed. Rather than panicking about his own death, he manages to select a clever means of execution that would ensure a lasting legacy. A favorite of many Twilight Zone fans – this episode was later adapted for the franchise’s radio drama series.

Our sixth selection belongs to “Shadow Play” – a chilling episode where we see a convicted killer awaiting his execution via an electric chair. We soon learn that this character is relieving the same day – and thus the same death – over and over. Although all episodes end with a mind-boggling narration – this one was especially poignant for many viewers – making this episode unforgettable: “We know that a dream can be real, who ever thought that reality could be a dream? Are we simply parts of someone’s feverish, complicated nightmare? Do you live here, in this country, in this world, or do you live, instead, – in the Twilight Zone?”

The next spot belongs to the first of three episodes from the first season to make this list. “Walking Distance” centers around an advertising executive, Martin, who goes for a drive to decompress from his hectic schedule. In driving toward his old hometown, he is surprised to find that he has somehow also driven back in time. He revisits the businesses and places of his childhood – all frozen in time. Throughout interactions with his younger self and his father – Martin gains a new perspective on how to face his current life and is then brought back to present day. Famed director J.J. Abrams, in an interview with Time magazine has not only stated that in his opinion, this is the very best episode, but that it works as a “beautiful demonstration of the burden of adulthood.”

Our number four spot, “The Monsters are Due on Maple Street,” was actually written by creator Rod Serling. In this episode, we see the inhabitants of a small street in the proverbial Anywhere, USA who experience an unexplainable shadow passing overhead – followed by a flash of light. At first thought to simply be a meteorite, the locals begin speculating over a possible alien invasion – and one where an alien is masquerading as one of their own. As you can imagine, civility quickly unravels as the paranoia sets in. As with many other episodes in this series, we see that humankind is often the author of its own demise.

Our third spot goes to an episode adapted from a short story by Jerome Bixby – “It’s a Good Life.” In this narrative, we are introduced to a small town named Peaksville which has inexplicably been isolated from the rest of the world. While many portions of this tiny town may look idyllic, the character of six-year-old Anthony shows that this town is essentially imprisoned by his every whim. Not only does he isolate and divide, but because he is telepathic – people are even terrified to think freely. A clear metaphor for totalitarian governments and ideologies – this episode skillfully sends chills down the viewer’s spines – as it seems “just real enough” to be viscerally felt.

“To Serve Man,” an episode adapted from a Damon Knight short story, comes in at number two. This science fiction story also deals with an alien invasion, but one where the United Nations has deemed the extraterrestrials are benevolent. In typical Twilight Zone fashion, however, we find that everything is not as it seems. This selection also has very iconic images and is one of the few times during the series that a character breaks the fourth wall, asking the audience “You still on Earth, or on the ship with me?”

Finally, our number one spot could only belong to the iconic “Time Enough at Last.” Adapted from the short story by Lynn Venable – the “be careful what you wish for” moral hits home with scenes that have become synonymous with the show itself. One of the most beloved episodes, this storyline has stayed alive in the minds of viewers over the years, despite being one of the very first written for the show. More than the typical moral lesson, however, this selection makes an interesting distinction between solitude and loneliness.

In conclusion, it is important to remember that more than an immersive form of entertainment, Rod Serling’s creation had a significant sociopolitical impact on American television. According to Brant Short at the National Communication Association, “It represented a significant departure from the norms of its era, and in many ways, it redefined the meanings presented by American popular culture. Through the lens of fantasy and science fiction, The Twilight Zone offered powerful messages on topics such as war, racism, addiction, extremism, violence, ageism, and consumerism.”

Classic episodes, as well as two seasons of Jordan Peele’s reboot are available for streaming on Paramount +.