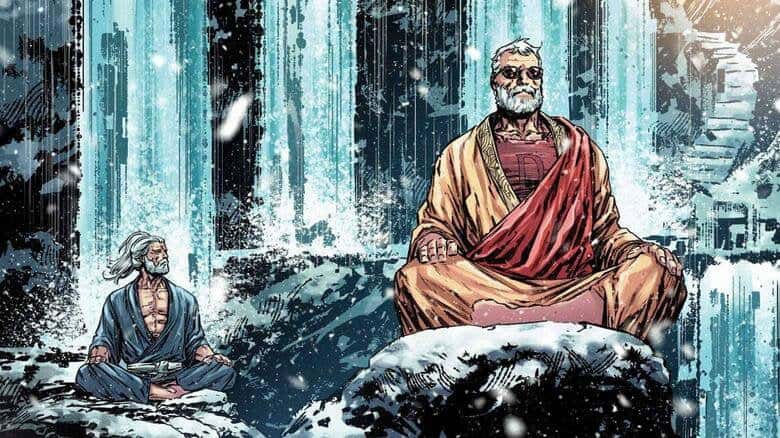 This would certainly be a fun comic to take a look at since if there’s one thing to think about, it’s whether or not Daredevil/Stick would have the patience needed to teach someone like Hawkeye, whose attitude never goes away and whose mouth can be kind of a problem at times. But the truth is that DD has been a very patient man at many times in his life and likely is one of the only people that have the patience to deal with the sometimes-volatile, former Avenger. We’ve already seen how well Hawkeye and Wolverine get along in Old Man Logan, but one has to remember that DD has far more patience than Logan does and is, arguably just as skilled if not a little more so when it comes to combat since DD has had to adapt over the years when it comes to his fighting skills, especially if those he’s fighting happen to learn about one of his biggest weaknesses. But for someone that’s mostly deaf and has gone blind as well in the future, Hawkeye is still cocky as hell and determined to do the right thing.

Remembering how he went blind isn’t too hard since it was due to the mutant known as Avalanche, and it was done as retaliation since Clint had killed Baron Zemo, who saw potential in Avalanche as a leader and might have helped him reach his potential. As punishment for killing the man that supported him, Avalanche took Hawkeye’s head in his hands and shook him so hard that he severed the optic nerves in his eyes, thereby cutting off his vision entirely. It would appear that Hawkeye was already going blind, but this action took his sight away completely. It does make a lot of sense to go back and see how Hawkeye retained such a deadly edge in Old Man Logan since his arrows still found their mark and his blade cut just as accurately and deeply when he went to work.

The former Avenger was good when he was younger and didn’t really get worse as he aged, but with the loss of his sight, it feels as though he would have been bereft of a great deal of skill since his deadly accuracy was dependent on his sight for a long, long time. But in this comic it would appear that Matt Murdock will be shown teaching Hawkeye how to pay attention to the world around him and thereby regain at least some of what he lost, meaning that he’ll learn to hone his other senses in order to compensate for the loss of the most important one that gave him such an edge. Those that have read Old Man Logan know very well that Hawkeye was able to take down multiple opponents as people remembered from the old days since every arrow found its mark and sound became his ally, replacing his sight in a big way as he could even tell where something was by listening to someone talk about it. The best example to bring up comes from the rescue attempt that he makes to recover his daughter, who ends up betraying him in order to take over Kingpin’s territory.

It is a little amusing to think of Murdock teaching Barton anything, but not for the reasons that some might think. Murdock would have plenty to teach to Barton despite the latter being a highly-skilled fighter. But the most amusing aspect would be that it feels certain that Hawkeye would continue his unending line of sarcasm and would have plenty to say about the training methods and anything and everything else that might be commented on. One very obvious fact is that Clint and Matt have very different personalities and it does feel as though they would clash from time to time, though Hawkeye would eventually shut up and listen more than he talked eventually. But it does feel as though this would have been a fairly long process since for a long, long time, Clint relied far more on his eyesight than on his hearing, especially considering that until he received help for his hearing he was kind of forced to rely on his other senses.

This story definitely has the promise of something that could be a lot of fun to read, and if the MCU ever leans in this direction it would be great to see if it could be adapted since the stories that show the future of the Marvel universe a bit grim, but they’re interesting enough that it might be worth thinking about opening up the multiverse to see what could be done with it. If nothing else, an animated show might be a good idea since it could bring a lot of stories forth for people to enjoy.