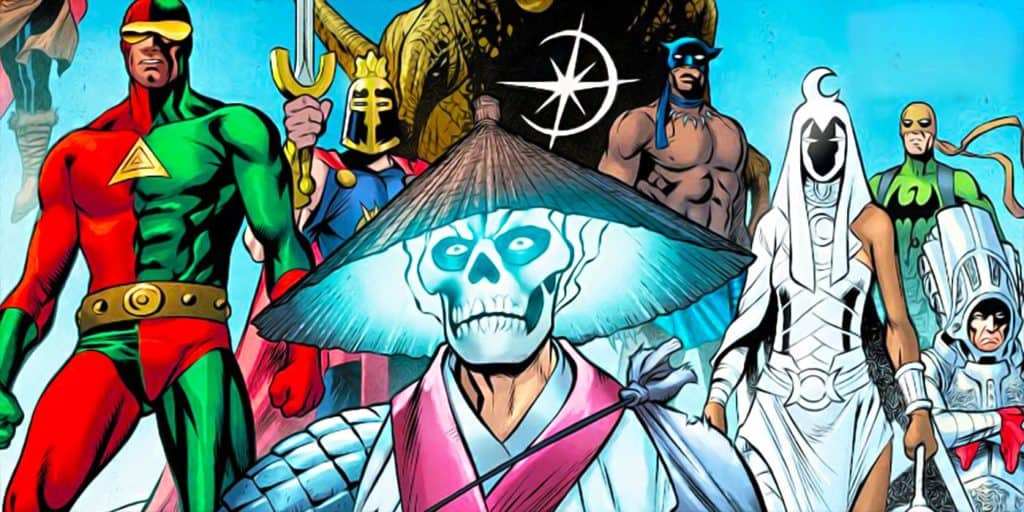 Introducing the multiverse was bound to get people thinking of how it could look if they went even further and started fooling around with the idea of different universes, and possibly different realities, and so on and so forth. With the number of different realities at the fingertips of those doing the creating and mixing and matching it’s easy to think that this was bound to happen since the number of different variations of heroes and the possibility that a group of villains would try to eradicate them is a fairly standard way of thinking in the comics. In a way, it almost feels as though the Omni-Avengers might be too easy to lose control with since the number of different ways there are to present one character after another is bound to make it possible for characters to emerge that feel a bit ridiculous, even if they feel like a good idea at the time. But at this point, it does feel as though people are excited enough to make an effort to get into the idea. It’s bound to be interesting, and it could be another sign of change in the MCU, but at the same time, it does feel like something that might get out of control at some point.

The main point of this appears to be the fact that Avengers are being hunted down and slaughtered throughout different realities, and the Invincible Ant-Man, aka Tony Stark, is actively seeking heroes to stand up to the villains that are doing this by dispatching his Deathlok soldiers, which is a new one on me. The comics have definitely changed since I was a kid when the stories were still bound largely to one galaxy and the multiverse hadn’t yet become the huge writing tool that it is now.

In a way, the idea of the Omni-Avengers does make sense considering that for different threats a different defense force is going to be needed, but where it becomes a bit tough to jump in and say hell yes to this team is the fact that the writing can easily get kind of crazy and so far out there that the rules are bound to change without warning and things might become more than a little chaotic. While chaos in the comics is kind of the point at times, there is the idea that a good story can beat out the need for too much craziness now and then, especially when it comes to a series that needs to run for a while to really gain the loyalty of the readers. One has to imagine that with the name, Omni-Avengers, that the team would be comprised of some truly over-the-top characters that would have the kind of power levels that are needed for taking on a very serious threat. While that’s not a problem, the power levels of the Omni-Avengers feel as though they might insane enough that they’ll end up becoming a group that some people like but a lot of fans don’t know what to do with. Throughout the history of Marvel comics, it’s been seen more than once that some groups look great and sound great, but eventually, there’s something about them that doesn’t track.

It’s hard to say that this might happen with any version of the Avengers since they’ve been a cornerstone of Marvel comics for a long time, but if anyone remembers the Great Lakes Avengers then they might realize that it can and does happen, and it usually starts to happen when things branch out a little too much. Eventually, the story thins out and becomes a lesser version of itself as spinoffs come along and the main thrust of the idea becomes less important than the many various ideas that go dashing off on their own throughout a wide number of comics that a person has to pick and choose from to avoid being overwhelmed. Some folks are able to devote this kind of time and attention to the many different ideas that come from the main comic, but a lot of folks would rather read about another group of Avengers rather than having to try and keep up with a constantly fracturing story that has to be pieced together issue by issue.  Perhaps that’s something that older fans would have an issue with, but at this time it does feel as though the Omni-Avengers, as cool of an idea as it sounds like, could head in the same direction as the regular Avengers and begin to split and fracture in ways that would be interesting at first, but would eventually spin out of control. There’s nothing to say that it will happen, but there’s always that thought that it could. We’ll have to wait and see what happens as things continue forward.