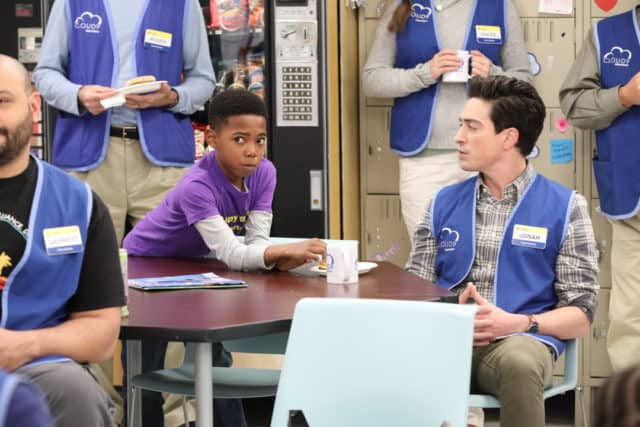 I really enjoy Superstore. Even when it’s less about common faux pas’ committed by retail shoppers across America, and more about the characters, I can’t look away. Exploring characters’ families is a logical next step in a developing show. Adding children to an episode doesn’t always work, but “Glenn’s Kids” added something special to the already extraordinary show.

This week on Superstore: Glenn brings all of his foster children to work to take a commemorative photo for his wife’s birthday. Charged with watching the kids for awhile, Cheyenne loses a young one, and Mateo puts some of the others to work. Mateo struggles with his breakup with Jeff. Jonah begins falling for Glenn’s daughter, and Glenn asks Amy to interfere so that he won’t be the bad guy.

Adding the children to the usual chaos ensuing at Cloud 9 gave Superstore a comedic jolt. Most of them didn’t have many lines, but their action and well-crafted comedic moments (like the one pictured above, with the cereal) shook up the regular formula of the show in an interesting way. It’s actually incredible how much something little like bringing your children to work can create such a well-told comedic story. Perhaps the best part about this show is that all the things that happen in it are incredibly normal, which shows us how funny every day life really is. I know I’m a broken record, but Superstore perfectly captures a real big-box store experience, which is filled with normal, every day people.

This particular scenario is so simple, but it reminded me that comedies don’t need to have gimmicks to work. You don’t need to have comedies with extraordinary premises, but only because comedies about regular people are funny. Relatable experiences work much better as comedies than manufactured scenarios that would likely never happen. Superstore works because everyone has worked with a Glenn, Garrett, Cheyenne, Dina, and Mateo. We all relate to the plight of Amy and Jonah to find their bliss. They’re not breaking the mold other than using the big box store as a catalyst for human stories that just so happen to be funny, and “Glenn’s Kids” worked to perfection within that realm.

Overall, Superstore has proven that it has the chops to continue long term. Hopefully, they won’t drag things out and will keep them moving forward, regardless of what that means for the favorite ships celebrated by the social media universe. Still, “Glenn’s Kids” was a fun episode, and a great reminder of why this show works.

Glenn brings his kids to work with him, which creates turmoil for the employees on this week’s strong episode of Superstore.