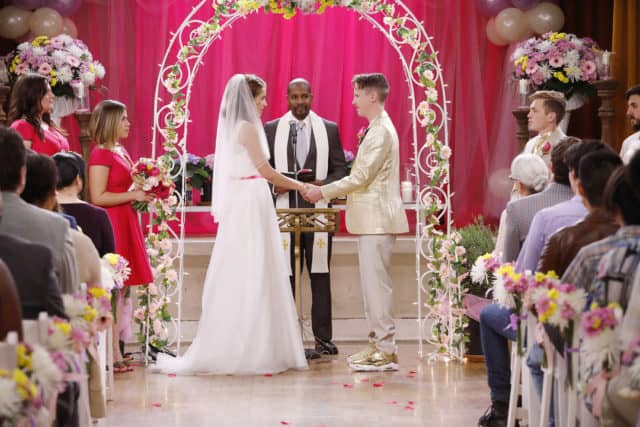 I feel like I must preface this review with an important disclaimer about me. I am NOT a fan of cringe comedy. Too much awkwardness makes me want to break out in hives. I loved The Office, but there are a few episodes I skip on the re-watch for this reason (Phyllis’ Wedding, ironically, is one of them). That said, Superstore is probably the first show since The Office that can get me to sit through the cringe because I care about the characters. Superstore supersedes (see what I did there?) any horribly uncomfortable moment with strong characters and clear intentions, making it bearable and sometimes even enjoyable to watch.

This week on Superstore: Bo and Cheyenne’s wedding is imminent, but not everyone is ready for it. Jonah and Amy try to dodge uncomfortable situations with their respective wedding dates, but are largely unsuccessful. Glenn invites Jeff to the wedding to try and plea to avoid the layoffs. Dina wriggles her way into the wedding party. Sandra is reunited with her soulmate.

So of course this episode was riddled with uncomfortable moments. We all know that they’re working a Jonah/Amy endgame here. It’s pretty obvious. But the hardest part about that is watching Jonah and Amy stumble repeatedly trying to defend themselves from appearance of wrongdoing. I think it was realistic, and cute that they were trying, but MAN was it uncomfortable.

I probably wouldn’t have noticed one uncomfortable story except that it was sandwiched between two more. Both Glenn inviting Jeff to the wedding and subsequently trying to get him not to fire people, and Dina becoming a bridesmaid and being horrible were both stories that made me cringe more than they made me laugh. I’m used to this kind of behavior from Glenn and Dina, but putting it together in an episode was a bit much.

All of that said, and especially considering that I don’t like cringe comedy AT ALL, this episode made me laugh just as much. A lot of that has to do with the fact that I can’t get enough of Bo, who rapped his wedding vows and knew how to be super sweet to his relatives. Even Sandra, who sometimes makes me cringe, made me laugh out loud several times in this episode. Really, even when an episode gets cringe-worthy but the characters are strong, it’s easy to fight through and find the funny moments.

All in all, this was a well-crafted episode. The jokes were not to my liking, but the characters still make the episode watchable. And of course, I’m just one person. If you like cringe comedy, you will like this episode a lot more than I did. Still, the emphasis is on the characters, and this was a strong showcase for all of them in different ways. Sometimes, being uncomfortable is a good thing.

Cheyenne and Bo’s wedding happens in the middle of a host of other problems on this week’s Superstore.