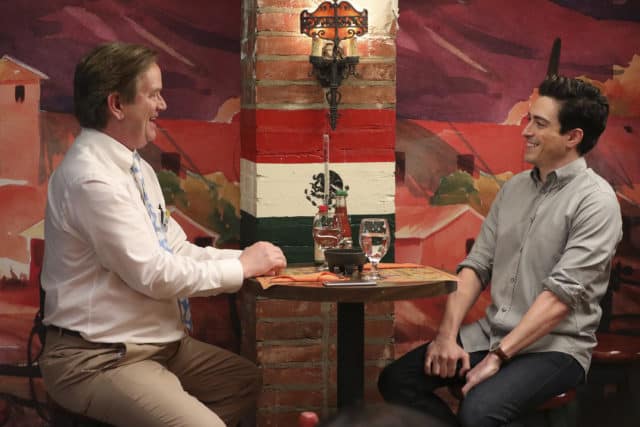 Now that seasons are winding down for the year, I’m ecstatic that Superstore has returned to complete its run for the year. I can’t decide if this show was made better by putting some distance between when Jonah started dating Glenn’s daughter, or if the impact would have been greater if the episodes had aired back to back. Either way, I’m so happy that this show is back, and excited for what is to come.

This week on Superstore: Jonah is seeking Glenn’s enthusiastic blessing, as he has received with all of his previous girlfriends fathers, so he insists that they hang out more. Of course, Glenn is not used to having close friends at work, so this hilariously backfires. Meanwhile, Garrett and Amy try to figure out the identity of a girl in a photo they find in the photo lab. Cheyenne’s boyfriend, Bo, takes a job at the store looking to make some quick cash, but it might be harder than he thinks.

I think the show is both better off from the short hiatus and worse off. Let me explain. The Jonah/Glenn story definitely benefited from some time off. Jonah wants to further his relationship with Glenn because his relationship with his daughter is starting off so well. The previous episode was when their relationship began, so airing them back-to-back would make it seem like the relationship is moving really fast. So, in some instances, the random breaks between new episodes can certainly work to their advantage.

Conversely, the other stories in the show suffered at the hands of the hiatus monster. Bo is always funny (still my favorite part of the episode), but the impact it could’ve had on the store, and particularly Glenn, to have Jonah start dating his daughter, followed by hiring Bo, followed by (spoilers) being told he has to fire someone? That would have been incredible. So this is no fault of the show itself at all, but it’s really the network that I’m criticizing here.

All in all, though, I found the show hilarious. Primarily this is because Bo temporarily joined the Cloud 9 team. Bo is my favorite recurring character for oh-so-many reasons, but primarily because I’ve met people like him. I didn’t always think they were funny, but when I meet them now I certainly do laugh. Johnny Pemberton is a gem, and if Son of Zorn gets cancelled (let’s be honest, that’s pretty likely), I would LOVE to see him join the cast as a regular. One can dream.

I was glad to have Bo back, and certainly glad to have the show back as well. Painting Glenn into an undesirable position like the writers did at the end of this episode should really get things cooking over the last few weeks. It reminds me of The Office and Parks and Recreation in that way, so I hope that they execute the predicament as well as those shows would.

Jonah tries to bond with Glenn, and Bo starts working at Cloud 9 on this week’s hilarious Superstore.