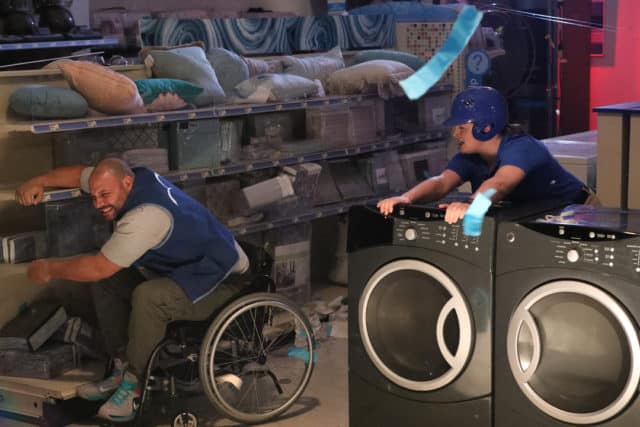 Did Superstore‘s second season go out with a bang? Well. More like a “twist”. Womp womp. See what I did there? Sorry. I couldn’t resist. Still, Superstore attempted something that most shows would shy away from, and changed things up again ahead of Season 3. At the end of Season 1, Cheyenne went into labor and some important things happened for our characters, but Season 2’s finale brought death and destruction to both the store and the show’s status quo.

This week on the season finale of  Superstore: As the deadline for Glenn to fire 6 people approaches, a tornado looms large over their location, Amy helps him decide who to fire. Jonah attempts to justify calling Amy “sexy” by using it in other situations. Garrett is upset that Dina doesn’t care if he lives or dies. Mateo forms alliances with other staff in case he is fired.

The best part about this episode was how truly unique it was. I mean, Superstore is already a unique show because of the type of workplace that it lampoons, but having a tornado hit Dunder Mifflin or Pawnee City Hall would have drastically changed this show’s predecessors. “Tornado” was funny in the reactions that it elicited, and the relationships that it altered, but the best part about it is that it was truly unique.

I hope that Glenn firing those people sticks. I mean, I think Marcus is funny and all, but it’s more important for the show to stick to its guns in a situation like that. Glenn finally doing what needed to be done signifies growth, and sticking to firing those characters will pay dividends for the show in the long term. And, the best part, they don’t have to fire the actors. Retail provides ample opportunity for these characters to stick around in a recurring capacity. Trust me. I saw some customers EVERY. SINGLE. DAY. But it also opens up the opportunity for more variety, and more focus on the central characters going forward.

A few other thoughts/funny moments:

I’m really impressed with how Superstore can handle both catastrophic disaster and workplace drama and still be so funny. Mateo calling Jeff, Amy and Jonah bonding, and Garrett and Dina’s mutual indifference all made the disaster story so much more interesting, and was full of laughter. Superstore has been one of the best comedies this season, and I’m excited for it to return for a third season!

What did you guys think? Was this a satisfying finale? Let us know in the comments!

A tornado heads toward Cloud 9 as the clock winds down on the layoffs, on the season finale of Superstore.