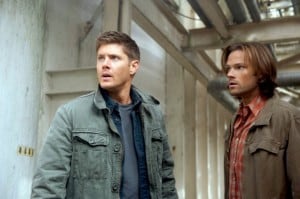 It’s difficult to describe the feeling that one might get from watching an episode of Supernatural that just feels FAMILIAR, but I think some fans may have felt what I felt this week. There’s something about putting together familiar characters (reuniting Castiel with the Winchesters), familiar quests (a God-related search) and familiar suspicious circumstances (sketchy angels with sketchy motives) that make me feel like I’m watching “classic” Supernatural. I have a great affinity for the first three seasons (season 2 in particular), but there’s something I immensely enjoyed about season 4 – with the introduction of the angels and a universal battle for good versus evil – that seems to resonate more in this season than it did in seasons 6 and 7.

It wasn’t a surprise that Castiel returned to Earth in this episode. Despite a group of journalists keeping this secret safe since our September trip to Vancouver (you guys have no idea how hard that was for me!), it was soon leaked by Misha Collins and then The CW itself. But just because we knew it was going to happen, doesn’t mean actually seeing it happen wasn’t enjoyable.

Dean began having “visions” of his friend which confused him immensely. Castiel was spotted on the side of the road and staring inside the Winchesters’ bedroom window (creepy much, Cas?). Sam insisted that Dean was feeling some sort of survivor’s guilt, but didn’t want his brother to hang on to those feelings. Fortunately for Dean’s sanity, the angel finally showed up in Dean’s bathroom and shocked the hunter with his return. Sam was overjoyed to see their old friend, but Dean was left with nothing but questions. How did Castiel get out of Purgatory being chief among them. This wasn’t soon answered, because Cas insisted that he had no idea how he got out and had little memory of what happened down there.

This bothered Dean for quite some time. So much so that we were treated to the final crucial moments in Purgatory: the trio’s arrival at the portal. Despite Cas’ distrust of Benny, the vampire pulled through, delivering Dean and the angel at the gateway back to earth. Dean did the spell that put Benny’s “soul” in his arm and then approached the portal with Cas. But two leviathans suddenly stood in their path (those guys are infinitely cooler in Purgatory than they were in season 7). A cool slow-motion fight ensued, but Dean finally managed to pull Castiel towards the portal. Only…Castiel’s hand slipped.

At least, that’s what we thought happened. And, apparently, what Dean thought happened. All this time Dean has been wracked with guilt, believing that he didn’t do enough to save his friend from torment in Purgatory but, as it turns out, his perception completely clouded his memory of the matter. Well, his perception or some wonky portal electro-magnetic side-effects. After saving the Trans (we’ll get to that soon), Dean confronted Castiel and asked where he went wrong. Taking pity on Dean, Castiel told him he was not to blame and showed him the true memory of what happened that day: Castiel deliberately let go of Dean’s hand and told him to leave. He chose to remain behind, he explained, because he felt that he needed to continue to atone for his prior sins. But he was still determined to help Dean get out of there and he didn’t want Dean to feel guilty for what happened. “You can’t save everyone, my friend,” Castiel told Dean.

These are words that Dean doesn’t really understand or may never understand. Dean carries his guilt like a shroud and feels so much for so many people that acceptance of his failures is simply routine for him. But Sam was right to tell Dean that he couldn’t let this drag him down or he would go crazy. Maybe that’s what Sam truly learned this year. Maybe Amelia and the dog don’t really matter. Maybe it’s the fact that Sam has learned to transcend the guilt that has dominated their lives that is the true lesson here. Some people might call that callousness, but I think it’s really acceptance. As Sam said in the premiere, people will always die. There will always be more demons and ghosts and beings using humans like pawns on a chessboard, but that doesn’t always have to be their problem. The truth of free will is that the Winchesters – and their friends – should choose to fight this fight because they want to, not because they feel guilt or obligations. Dean doesn’t really understand that yet, but I hope one day he will. 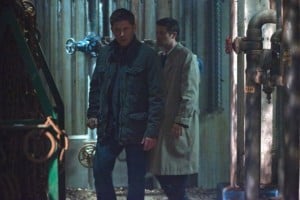 Personally, I’m thrilled at Castiel’s return to the fold. I’ve never really felt that he takes away from anything (ie. the Winchesters’ relationship). Instead, I feel like he adds a little something extra to the show, like well-timed humor or another perspective. There are some who would claim that Castiel’s actions in earlier seasons were unforgivable, but I don’t feel that way. Unforgivable actions have been committed by all three main characters of the show (or four, if you could Bobby), but “unforgivable” becomes “forgivable” if you seek redemption. Sam sought redemption for his soulless acts and the things he did in season 4. Dean sought redemption for the sins he committed in Hell. Castiel did some horrible things in season 6, including his deal with Crowley and breaking Sam’s wall, but I think his remorse of these things were genuine. He was led astray by hubris, circumstance and desperation (which is why I think he shares many similar traits with Sam, but let’s not rehash that old argument), but he took Sam’s visions into himself and when it came time to leave Purgatory, Castiel was willing to remain there and pay penance rather than return home with his friend. It stands to reason that if he hadn’t been saved (we’ll get to that soon as well) that he would have remained there forever, running from monsters and thinking on his sins. I’m glad that didn’t happen. The Winchesters need him, not only for his powers but because he has once again proven himself a friend. If his quiet words to absolve Dean of his guilt weren’t proof of that, I don’t know what is.