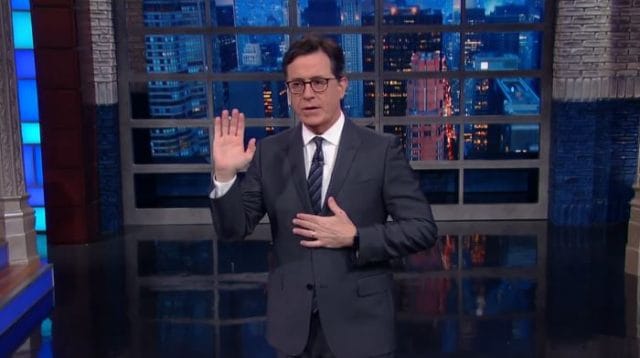 Talking about Donald Trump on The Late Show is essentially like breathing for Stephen Colbert. He does it every day, probably without even thinking about it too much, since most of Trump’s comments are pretty much jokes by themselves, and doing so gives him life. However, after learning that Hillary Clinton is refraining from responding to Donald Trump’s comments throughout the remainder of the election, Colbert tested himself and tried to see if he could go throughout his entire monologue last night without mentioning the Republican presidential candidate.

During his Late Show monologue, Colbert turned to topics like the fall weather or the upcoming holiday of Halloween. But both topics only reminded him of Trump, whether he mentioned the “bright orange” leaves on the maple tree in his front yard, or discussed the jack-o-lanterns that people make every year to celebrate Halloween.

“Don’t give up, don’t give up,” Colbert audibly told himself before he just said “screw it” and dove into Donald Trump’s recent speech at Gettysburg, which started off strong for about the first minute before he, of course, messed it up. Trump went from talking about how we need to heal the divided nation that America has become to promising that he would sue all of the women that have come forward claiming that he sexually harassed or assaulted them.

“Yes, he will take all of these women to court,” Colbert said. “But at least when he’s swearing in, they’ll know where his hands are.”

Watch Stephen Colbert, along with the Ghost of Abraham Lincoln, break down the rest of Donald Trump’s Gettysburg speech in the video below: