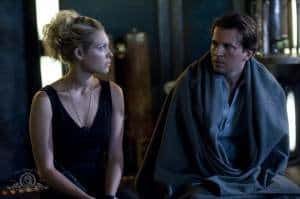 Tonight’s Stargate Universe left me with a slack jaw and a “WTF?!” mentality when the executive producer credits rolled. Is this a bad thing? Not at all. The episode gave us answers on two of the long running mysteries on the show, while slightly setting up the mid-season finale for next week by using character growth as the lead. Just about everyone got a chance to shine tonight and we saw some deep character moments from the least likely of subjects.

So we finally found out what happened to Those Who Stayed Behind on the planet created by the aliens, but yet still have no clue as to what happened to them. My thoughts? The Blue Aliens Group are behind the return of the group as well as the planet they tried to call home, which begs the question: what is their endgame? If they want the Destiny, are they trying to get ahold of the message Dr. Rush discovered? What will they do with the information once they recover it?

As for the flash at the end of the Kino feed, could that have been the obelisk activating, sending them across the galaxy to say goodbye to their counterparts before their final journey ‘home’?

On the flipside, the return of Dr. Caine and his “flock” also sent the whole TJ’s baby story line into a tailspin, because now we don’t know if TJ’s baby is actually dead or if there is something else going on we don’t know about. While I’m leaning towards the former, I’m pretty sure that anything is possible at this point in terms of plot twists and surprise revelations on SGU. Then again, TJ’s visions of talking to Caine during the Lucian Alliance incursion could’ve been a premonition/warning of sorts to the group’s ‘return’. In that regard, it would be plausible for TJ’s baby to be deceased given that the people she thought she was talking to were deceased as well.

In the same incident, TJ’s final conversation with Dr. Caine last night mirrored the one they had at the start of the season, which revolved around the concept of faith. I will get more into this later.

While the rest of the crew were dealing with the whole return of Those Who Stayed Behind, Chloe was dealing with her impending death/transformation. This story line set up the stage for next week’s mid season finale, which seems to be epic based on the trailer at the end of last night’s episode. Will Chloe’s newfound powers come to some use, or will it be too late to save her?

Last night, Ronald Greer showed a sign of… what can we call it? Weakness? Tenderness? A heart? In more than one scene, mind 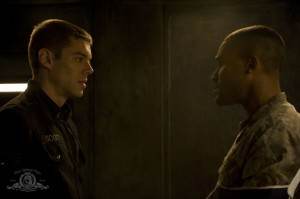 you! The scene between Ronald and Chloe as he asked for her forgiveness (for when he has to kill her when she changes) was one of the true highlights of the episode. As he delivered Ronald’s scared, remorseful plea, Jamil Walker Smith knocked his performance across several universes, breaking Ronald’s mold of being the hardheaded, stone cold grunt we’ve all come to know at the same time. It was a great turn for the character and I hope to see more of this side of Master Sergeant Ronald Greer in the future.

Chloe has pretty much came to terms with her impending death by idly waiting for the day to arrive. It’s traumatic for her to have some sort of use for the crew, but since they have no way of harnessing it to their advantage, she must pay the ultimate price, which is unfortunate. The other sad thing? Scott seemingly has came to terms with Chloe’s dilemma, which we thought wouldn’t happen given his expression at the end of Cloverdale (yet he still held her hand). He truly loves Chloe, so it was very sad for her to turn him away to make the blow of her death seem a bit less painful. He was the only person who’s really stood by her through this entire ordeal, which makes denying his entrance all the more tragic. This might not end well next week, people, so be prepared for some frustration to come our way with this scenario.

TJ managed to balance her feelings and her duties tonight in a remarkable way, because with all the stress she’s been under, I don’t see how she hasn’t snapped yet. One would think the reveal of her baby not being with Those Who Stayed Behind would’ve been the switch to trigger her emotional breakdown, but surprisingly it didn’t. Instead, TJ used logic to deduct what she probably knew all along, which leads me to my final thoughts of the night. 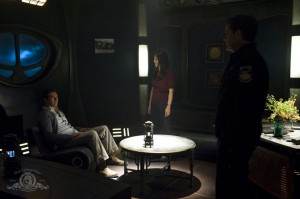 Faith vs. logic/science were the ongoing themes of tonight’s episode, bringing me back to TJ and Caine’s conversations from both “Intervention” and last night’s episode that I mentioned earlier. ‘Dead’ Caine gave TJ advice on having faith that her baby was in a better place, which is similar to what ‘Angel’ Caine kind of told her in “Intervention” about knowing her beliefs and who she was being everything she will ever need. The correlations between both scenes are uncanny, except the difference this time around was TJ prepping ‘Dead’ Caine to move on as ‘Angel’ Caine did for TJ in “Intervention”. It was as if this story line had come full circle, but there is a nagging thought in the back of my head that says this situation is far from over.

Also, the scene between Rush and Caine was pretty awesome in terms of the religion debate between the two. Caine’s hopeful outlook on their “miraculous” return was shot down by Rush’s impeccable logic of the whole situation, because it really didn’t make sense in neither a biblical or scientific nature. It was as if Rush was having the ‘last laugh’ at Caine’s blind faith, which turns out ultimately got Caine and the others killed in the end, because they didn’t bother to use logic with their faith when they decided to stay behind. Plus, Rush is still shooting down the concept of the message he cracked originating from God, which had a plenty of SGU fans in a tizzy when it was revealed a couple of weeks ago, me included. Religion can have a place in science fiction, but I think it would get a little too preachy if it lands on SGU. However, with the concept of the message and where it originates, can we avoid explaining that without bring religion into the mold?

Before I sign off, there was one more two thing that stuck out oddly to me this week:

– Eli and Rush both got over their vengeance spells pretty quick this week, especially after the hell they raised after finding their loved ones killed by a deranged lunatic. Maybe a good significance of time has passed? Hopefully that’s the case…

I really, really enjoyed your comments last week and can’t wait to hear what you have to say this time around. What do you guys think? Are the Blue Aliens the equivalent of the Wraith and Ori from the previous Stargate series? Or are they just a pesky menance that you’re growing tired of? Also, do you really think Chloe is a danger to the crew? And was there finally closure in TJ’s story line?

Sound off below and in our Forums!

P.S. Sorry for the barrage of questions.