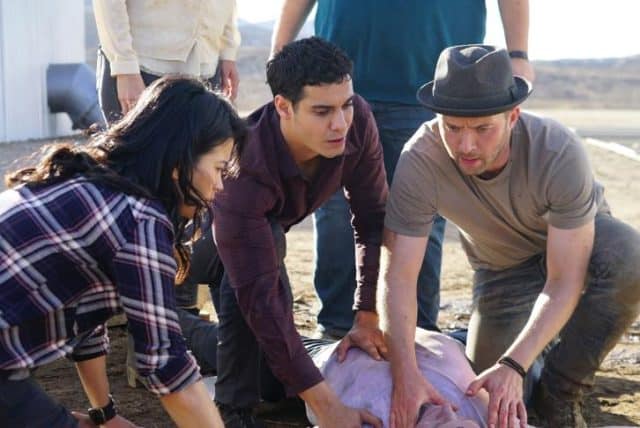 Team Scorpion takes on a typical case for once in this week’s episode of Scorpion. Though like all episodes, something has to go wrong. Agent Gallo got severely injured from a piece of copper that flew off the turbine of a desert pipeline. The team scrambles to save the Homeland agent using those genius brains of theirs. It’s 2017! It should not be a repeat of 2016!

When Walter told Agent Gallo that it was a pleasure working with him, my eyes went wide. After everything they have been through, that’s the only thing that he can say?! Walter O’Brien, I thought you were better than this! I totally agreed with Paige when she said after two and a half years Walter had not improved on how to open up. That and for forcing Tim to leave the team.

Things then got awkward for Waige as they arrived at a nudist hot spring. They tried reasoning with the security guard, but the latter said that clothes are non-essential at this particular hot spring. Anything to save Agent Gallo, yes? I for one just sat back and enjoyed the awkward tension as Walter and Paige collected the hydrogen sulfide gas while covering up their birthday suits.

Toby’s play on Vanilla Ice’s famous song Ice Ice Baby as the team turned the Homeland agent into a human popsicle was amusing. I immediately thought of the song when I saw the episode title. Good one, writers. I also applaud Sylvester’s bravery in catching the rattlesnake so they can inject Agent Gallo with venom to thin his blood.

It was heartwarming to see everyone’s relationship with Agent Gallo. They truly are like a family. Walter wasn’t exactly lying when he told the EMT that Agent Gallo is his father. The agent is more like a father to him than his birth father because he understands Walter for who he is. When Walter told Agent Gallo he loved him; I almost shed a tear. That and when the Homeland agent gave Happy a pin that once belonged to his mother to wear on her wedding day.

I also wish that the Homeland agent can work up the courage to ask Allie out. He can face the toughest criminals and situations without hesitation, but when it comes to women, he takes a step back. The scene where the campaign manager hinted at Agent Gallo that she wants to go out on a date with him made me roll my eyes. Paige was right; you suck at girls, Agent Cabe Gallo! On a side note, to quote Lucifer’s words to Detective Decker in the very first episode: “Glad you’re not dead!”

Team Scorpion saves Agent Gallo’s life as they repair a pipeline in the middle of a desert in this week’s emotional Scorpion.