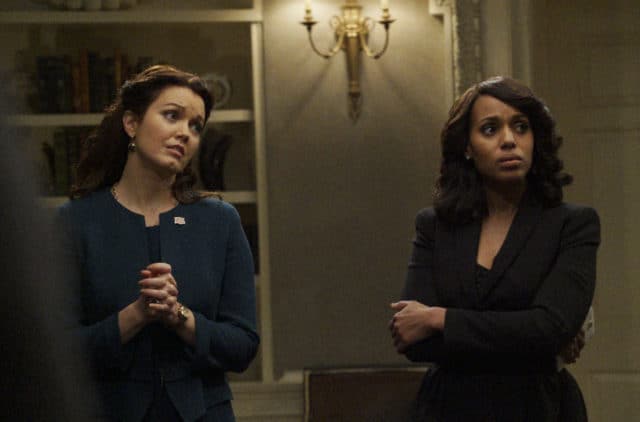 Meanwhile, Fitz enters to find 9 bombs above metropolitan areas. As news reports, Peus calls Liv. Detonate one by one until Mellie and Samantha (Mystery Woman) are released. Liv calls his bluff. He detonates. Liv goes to find Rowan. She asks him to help, but he’s leaving. He’s free. He doesn’t want to stay and die, or worse, watch Liv die. In a meeting with David, Fitz, Jake, and Liv, Mellie wants to give herself up. She’s all Peus wants. Fitz refuses. However, they do mention that they have someone in custody who may know where Peus is. Jake goes to interrogate Samantha. He tells her that if she gives up Peus’s location, than he will set her free. She refuses, so Jake pins her down and cuts into Samantha’s neck. He digs out a chip.

Jake hands the chip to Huck. Meanwhile, media is hounding everyone for information. As Marcus tries to hold them down, Mellie looks from afar, feeling guilty.

They find out that in order to stop the drones, they need to find the central location. Suddenly, the drones are moving. As Peus shuts Huck out by shutting down the chip, he gives Liv a call. He tells them the next place he will blow up is Philadelphia. As Liv refuses to give him Mellie, he hangs up and detonates it. As David informs Liv and Fitz that they have seized Peus’s computers and searched his home, Fitz convinces Liv they need to go talk to Rowan. Liv tries to convince him, but when he still isn’t willing, Fitz accuses him of working with Peus. After a confrontation, Rowan reveals that he no longer believes in the Republic. America is falling apart. It’s every man for himself. Rowan is broken.

Abby, who has been shut out this whole episode, is talking to Mrs. Vargas and Cyrus when they are interrupted by Fitz. Fitz asks Mrs. Vargas to leave and Abby complains about being shut out. When Cyrus makes a suggestion about how to respond to the attacks, Fitz agrees and asks him to come along. Cyrus is back in the game.

David approaches Liv to tell her that Rowan has been receiving packages from Peus. Could he be involved? Meanwhile, Cyrus comes up with the idea of telling Samantha that they have captured Peus. She has no access to TV, the news, Internet. Whatever they tell her she will believe. When Jake tells her they have Peus and have offered him a deal, Samantha believes that she is done. She convinces Jake to give her the deal they gave Peus. In return for immunity, she will give up names, bank accounts, everything.

Liv asks Huck to pull up the surveillance to find out what Rowan received in those packages. Each time Rowan opens the box, he gets scared. As he gets increasingly distraught, we find out that they’re sending him bricks, one each time.

David offers Samantha Jake’s immunity deal. She requested that he do it instead of Jake. There, she tells him her real name is Grace, and that she would like them to start over. When David tells her he was faking their relationship their whole time, Samantha reveals that she was testing her. He has a twitch when he lies. That’s his tell. She now also knows that they do not have Peus. David punches her in the jaw.

When Liv tells Fitz about the bricks, Fitz goes to talk to Rowan. This time, he brings whiskey. He confesses that he knows he’s never been in control. People around him pull all the strings. He also talks about his legacy. This is what he will be remembered for. Rowan yells at him because he has never had is power taken away. He has no idea what Rowan is dealing with. Every time, a box between 9 and 11 pounds is delivered. The human head is 9 to 11 pounds. Each time a box is sent, he is reminded that if he does not cooperate, Liv’s head will be delivered. Fitz tells him that Liv is his legacy. She is who he should think about.

Cyrus informs Fitz about the evacuations in the different cities. However, the drones have shifted near buildings. If they take the drones out now, there will be collateral damage. As Fitz and Liv discuss what to do, Rowan walks in and tells them he wants to help. Liv takes Rowan to Samantha, where to apologizes to Liv and steals the Secret Service agent’s gun. He frees Samantha and tells her that if she can guarantee his safety, he will take her with him when he runs away. She can’t personally, but she can convince her boss to. As they leave, Rowan locks Liv in the room.

As Cyrus reminds Abby to fight for what she wants, Rowan meets with Peus who tells him he is free. As Peus leaves, it is revealed that this whole thing was planned. Rowan needed to gain Samantha’s trust, which would lead them to Peus. Jake kills Peus and Rowan kills Samantha using the tooth of a t-rex. As, he puts it back, all is right again.