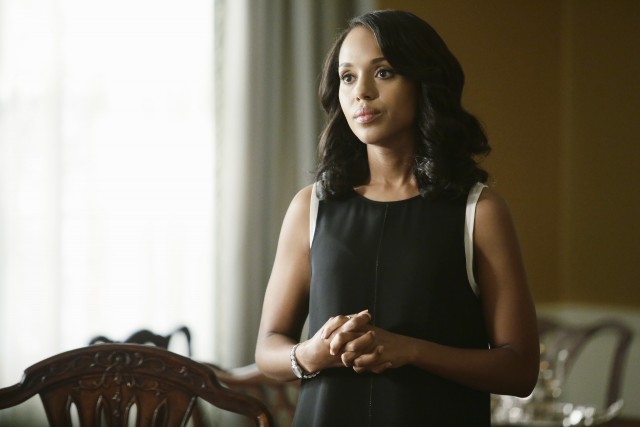 “Yes.” That one word that could turn the world upside down, was finally uttered by Olivia in last week’s episode of Scandal. Coincidentally, it is the same term I excitedly let out as the third episode of the season ended. After two weak installments, Scandal seems to be getting its groove back.

As the POTUS and FLOTUS have just started their make-pretend-everything’s-peachy interview, Abby sports a deer-caught-in-the-headlights look and the wrong running shoes. Liv has just confirmed to the world that she is, in fact, the president’s mistress, which obviously means that Mellie and Fitz need to be stopped before they make fools out of themselves, if that is remotely possible. Abby uses the president’s detail and a bogus threat to interrupt the interview, and secludes the First Couple in the Oval to break the news to them.

Understandably, Mellie loses her cool. The poor woman can’t catch a break. In contrast, Fitz is in awe, which was both refreshing and upsetting to watch. I have never in my life seen a man so proud of being outed as a cheater. That stated, he still is the POTUS and seems to have no concept of the danger his political career is in. As much as I am willing to go with the romantic aspect of it all, it is hard to buy that a politician, especially a president, would be so relaxed about his whole legacy crashing down. However, because the focus of the episode was not on him, and the vital actions were carried by others, mainly, the powerful women in the Commander in Chief’s life, his delusional stance works. Or I’m willing to let it slide.

Olivia gets to the Oval, where she is greeted with polar opposite reactions. While Mellie wants her head, Fitz seems to have rediscovered what love is.  However, the task they all have at hand now is to stop the recording of Fitz and Mellie’s denial of trouble in paradise to be made public. The reporter who was conducting Fitz and Mellie’s interview agrees to make it vanish, but ONLY if they grant him the divorce exclusive. It is ridiculous that any member of the press could blackmail the entire administration, especially while still on the premises, but once again, this is Scandal.

Fitz wants out. He wants the world to know about him and Olivia, even if that costs him the rest of his term, which, again, he doesn’t seem to care about. On the other hand, Mellie is not on board with that plan. She’s hurt and does have a grasp as to how politics work. Ironically, it is Liv who aligns with Mellie’s concerns, because she also understands the game. Regardless, everyone needs to regroup and the “First Affair” is, sort of, the case of the week.

Cyrus proclaims himself Mellie’s adviser, just when the FLOTUS is having a conversation with Abby, who is trying to convince her that going public with a divorce could help her career. However, Cyrus shuts her down and has a private conspiracy meeting with Mellie, where they discuss how to get the senator to the Oval. In order for that to happen, they give Fitz’s camp a list of demands that, if not met, would end the possibility of Mellie giving an exclusive about their divorce. Fitz is upset about the new development and even dares to claim “She’ll get nothing and she will like it,” which not only sounded creepy but also revealed even more how delusional he is. Also, he pretty much looked like a toddler throwing a tantrum. No, Mr. President, you cannot have the power, be an exemplary leader, have a mistress, AND dictate that your wife doesn’t get a thing. Once again, it becomes very hard to be in Fitz’s corner.

Cyrus and Mellie’s demands include the POTUS being with his soon-to-be ex on the campaign trail, while Olivia is not allowed to move into the White House or get married before Mellie becomes president. Additionally, Olivia can never take the Grant name. While Fitz is outraged, Olivia deems the terms to be fair; therefore, Fitz agress. However, once the agreement is actually written up, Mellie refuses to sign it; she wants more. She also accuses Cyrus of having gotten soft. Every word Mellie utters rings true, not to mention that Bellamy Young’s performance is lawless. She brought the episode home on every level.

With a bruised ego, Cyrus decides to speak to Fitz and make a case for him to take Mellie back and put Liv on the back burner until his term finishes, which is the most obvious course of action to embark on. Overwhelmed, Liv wanders around the White House and ends up in a closet with Mellie, who is in frantic pursuit of her hooch. Mellie winds up pouring her heart out to “the other woman” about what it took from her to remain by Fitz’s side. The words get to Liv, but also get to the audience. Mellie, at this point of the series, is easy to understand, no matter how extreme and undone she might be; she comes from a place of hurt.

Liv then talks to Fitz and tries to make him see reason. She knows that they need to wait to be fully together. However, Fitz blames Mellie for Olivia’s change of heart and FINALLY decides to talk to his wife.  He thanks her for everything she’s done for him, admits that he was the one who broke up their team, and claims that he knows she will become the first female American president. It works. It shouldn’t have, but once again, Mellie budges.

Later on, Cyrus talks to Fitz and assures him that he is doing the right thing and then makes a plea for himself. He wishes to be back at his side. It was the most exciting love declaration the episode showcased, albeit a failed one, since Fitz shuts his former right hand down. Hurting Cyrus causes an expected domino effect, since the man runs back to Mellie and tells her that she has been played by the greatest politician in the world. Mellie listens to every word, relives every miserable moment she went through because of her husband, and simply runs.

With the FLOTUS in the wind and no leverage, Abby, Liv, Liz, and basically everyone working at the White House blindside Fitz. At the podium, the redhead throws dirt at Olivia, shedding light on her reputation. Even though the president wants to stop the take down, Liv persuades him to “sit and watch her choose him.” They both sit, embrace, and sip on whiskey.

The B-story of “Paris Is Burning” centers on Quinn, Huck, and Jake proving how on the outs they are when there is no case. Additionally, Jake visits Papa Pope after noticing on the news that the Louvre Museum was in flames. As it turns out, that is code for an operation.

All in all, this week’s Scandal was a home run. While I do believe that this should have been the installment that opened the season, it had every element that we have grown used to expect from the show. The Gladiators continue to be a weak point, but after the new developments, it is clear that they will be back to action, which offers promise. That said, Abby, Mellie, and Liv were the clear driving forces of the installment, and it worked. Moreover, having Cyrus back injects Scandal with the thrill that it has lacked for two consecutive weeks. I still roll my eyes at everything that involves Fitz; the character seems to be impossible to save at this point. In fact, he needs an army of powerful, skilled woman to save him. Every time. But as long as we have those women, as long as the performances keep being of the caliber of last night’s hour, I’ll take it.