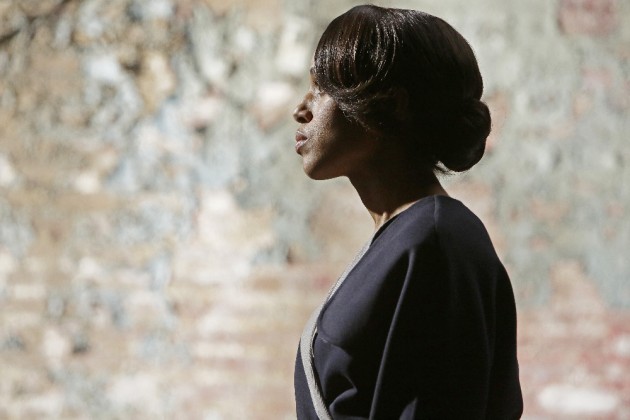 After the major twist in last week’s Scandal, “First Lady Sings the Blues” offers a cold opening, with Quinn finding a critically wounded Jake (who she believes to be kapput) on the conference room’s desk, a piece of furniture that has seen more action than a Liam Neeson fan. Thankfully, Huck was around to barely bring Ballard back.

Since taking Jake to a hospital would be a measure of great risk that would leave breadcrumbs for Papa Pope to find him, Olivia and her Gladiators (including the honorary ones, David and Charlie) bring their soldier down to a non-steril, yet hidden location, where they meet a Russian doctor, who upon examining Jake’s wounds, determines that he is in need of several surgeries. The issue at hand becomes that the doctor recognizes Olivia, and instead of money, he asks for a favor in return. The doctor wants the fixer to help an infamous retired KGB agent, known as “Black Sable,” who had been recently given a new mission. At first, Olivia responds in the negative, while David reaffirms that they don’t “do favors”; however, they are out of options. I’d suggest Olivia calls the peeps at Grey Sloane’s but you know…

At a crossroads, Olivia and Huck visit the agent in need of help, only to find a suburban grandmother who looks benign and 100% American. In other words, Black Sable, now Mary Peterson, was a poor young Russian girl when she was recruited by the agency as one of their most efficient and ruthless killers in U.S. soil. The cost: she would never be able go to her homeland again, and the death of her mother, who the KGB terminated. As Mary explains, she had passed for an American, gotten married, had a child, and led a successful double life. She remained inactive for a number of years until she had recently been reactivated. Now the guardian of her young grandchildren after a drunk driver killed her husband and daughter in a car accident, Mary cannot afford to get back into the spy games.

Mary’s story is compelling enough, and helping the woman suddenly becomes a good deed and a fair exchange for Jake’s life. However, OPA would be going against the KGB, and while the Gladiators are proficient at what they do and Liv has more power in DC than any other woman and most men, she has no handle on the Russian agency. The job at hand is an uphill battle from the get go.

Speaking of uphill battles, since Jake is out of commission and everyone’s lives are in danger, David is forced to postpone the Grand Jury hearing regarding the B613 case. Additionally, it turns out that Jake has a punctured lung, and the doctor doesn’t have blood for a transfusion, which prompts Quinn and Charlie to rob a hospital. I found both of these elements to be critical. To begin with, it is hard to believe that at this point no one is shutting that case down. It is clear that Rowan is not going to give up and until they regroup and find a better plan; they can’t beat him. Regarding the stolen blood, as much as I adore Quinn embracing her inner bandit and teaming up with Charlie, it is troubling to me that they would break into a hospital with no masks and bound doctors. Quinn’s face is not just any face; she was Lindsay Dwyer–her case was well-known, and she should be easily recognizable.

In the meantime, Huck follows Mary in order to track her new KGB handler, a man who works at a butcher shop, while Papa Pope re-routes Russell’s mission. As a result, Olivia and Huck make the butcher/handler, also known as “Cold Steal,” an offer that he refuses, as Liv’s boy-toy tracks her. It was a smart move from the writers to tie those arcs in such a way. Effortless, yet efficient and plausible.

Later on, Russell informs Daddy Dearest that Olivia blew him off. Without much worry, Rowan decides to put a bullet in his employee’s arm, because he knows that his daughter would never refuse to help him. He is right. Liv and Huck visit Russell at the hospital, where he tells them a bogus story about how he got shot. The duo proceed to take his belongings, drug him, and take him with them to their hiding spot turned into medical center.

As the stakes get higher, D.C.’s favorite fixer decides to try a new approach and pays another visit to Cold Steal, to whom he offers B613. For some reason, Olivia believes that she can kill two birds with one stone and puts the KGB against her father while waiting for mutual destruction. For that purpose, she gives the agent a burner phone that will lead him to Rowan.

Speaking of Russell, he is being tended to by the doctor, right next to Jake, which naturally, prompts the former to attempt to silence the latter once again. He fails but manages to listen to Olivia’s plan. Fast forward to a little bit later, Huck informs Olivia that he can’t get in touch with Cold Steal, causing the crisis manager to check on Mary at her house. In a devastating turn of events, Liv finds the woman and her young grandchildren killed, bullet holes in their foreheads, on the living couch, while Cold Steal is (pun intended) cold, stored in Olivia’s car’s trunk. A phone that lays on the man’s chest rings, and it’s none other than Rowan, letting his daughter know that she simply can’t win.

Back at the secret location, the doctor bails on the Gladiators. He is crushed by Mary’s demise, and it becomes impossible to blame him. However, that still leaves Jake’s life dangling. David, Liv, Huck, Quinn, and Charlie attempt to decide on their next move, and after a heated exchange of arguments, the obvious solution comes up to the surface. Rowan has won. As a result, Jake will finally be transported to the hospital, and the Grand Jury will not hear about the black ops organization. As much as I loved Olivia’s speech, I still fail to see why she did not ask the White House for medical help at a secluded sterile location, which the show has shown before. I am also confused as to why Fitz and Cyrus are not actively trying to shut down the B613 take-down operation; after all, the POTUS is involved, too.

While Jake is taken to a licensed medical facility, Olivia takes Russell with him. Just when Russel thinks that she is seducing him and his undercover mission is intact, she puts a gun to his head and informs him otherwise. It was about time.

Interwoven with the spy games was the underwhelming arc of Mellie trying to run for the senate, which can simply be explained in a sentence: America doesn’t like her. Her relationship with the president seems to be a problem, and Sally Langston uses her power with the media to make a circus out of the First Lady. Abby and Cyrus (who reluctantly helps) decide that a feminist approach would give Mellie a more favorable outlook. However, at the end, Mellie does the opposite and reminds the state of Virginia that she sleeps next to the most powerful man in the nation. In all honesty, I couldn’t bring myself to care for the arc in this episode. Jake and Mary’s lives at risk are storylines that compel, while Mellie’s is far more superficial. Between the heart and the power move, I’ll go with the heart.

It saddens me to be writing this, but ”First Lady Sings the Blues” was an unbalanced episode of Scandal that failed to impress. The spy games provided the best moments; however, that arc felt rushed given that half the episode was given to Mellie’s campaign.

– Even though the White House element was not my favorite in this particular installment, the on-air verbal battle between Cyrus and Sally was that arc’s highest point. Watching intelligent characters argue is always fun. Both actors absolutely killed it, and the writing was spot on as well.

– Charlie. His one-liners are some of the best, and George Newbern is an amazing scene stealer. I wish he was made a series regular.