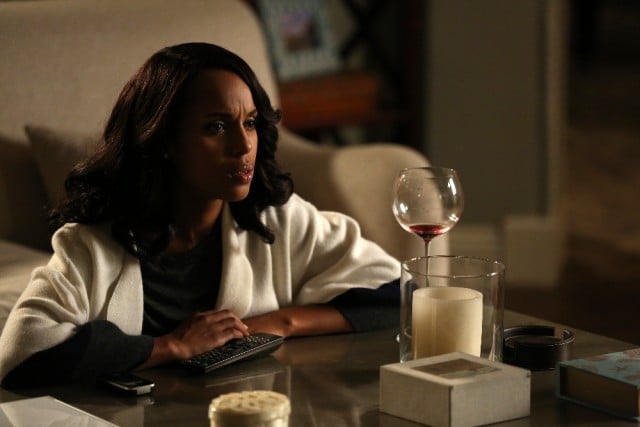 Oh, Scandal. Your first episode this season felt like getting back with an ex, the second was a bad rebound, the third was like falling in love with a best friend, but last night’s installment equaled full-on infatuation. I don’t make statements lie the latter lightly, especially not after a rather disjointed start to the season. However, “Dog-Whistle Politics” has been the best hour Scandal has had in its fifth season; it was flawed, yet poignant, and above it all, it touched upon issues that, in my humble opinion, needed to be addressed.

“Dog-Whistle Politics” opens with a hour-long special dedicated to the life, rise, and fall of Olivia Pope, who is clearly getting the Lewinsky treatment. She has been vilified, shamed, and reduced to being the “Fist Mistress.” All her accomplishments are diminished, and her success is attributed to the high-profile relationships she was part of. The media is blood-thirsty, and, naturally, the immediate reaction is to label Liv a power-hungry vixen, whose organic path was to set her eyes on the POTUS she helped get elected. It is infuriating to watch the vultures eat her alive, albeit necessary. What Scandal depicts rings very true, and it aims to hit nerves, which it does well and rightfully.

That said, as Olivia is being shamed, she remains stuck at her apartment, a necessary evil, which, sadly, makes her basically inactive for the entirety of the episode. On the other hand, the Gladiators are finally activated. First off, Quinn attempts to recruit Marcus, which is a fabulous development, even though we had seen and read the writing on the wall. At first, the man refuses to “gladiate in a suit,” deeming OPA’s tactics questionable, but then he has a change of heart and decides to “help out a sister.” The turn is a bit forced but welcomed anyways. In my view, Marcus is exactly what the show, and the team, need. We get it: Scandal is about high-profile cases, but the Gladiators need someone who has the street smarts that the new recruit possesses. He is, on every level, a breath of fresh air.

Marcus is not one to take the punches, and he decides to respond to the media in an educated way, no questionable gladiating involved, which I, for one, am grateful for. He sort of gives Puck and Quinn a crash course in dog-whistle politics (which I’m sorry, but they should have learned by now), and together, the trio defend Liv in front of the cameras, calling the media and the bullies out. Every single bit of it was enjoyable and hammered home a valid point. That part of the episode alone deserved a standing ovation and a “thank you” from every woman on Earth.

Meanwhile, on the pseudo-politic front, there are several elements cooking. The threat of Fitz being impeached is at the crux of it all, and this shouldn’t be shocking. What is surprising is that no one thought about it before. That said, Fitz continues to be the weakest link of the show. He just fails to convince as a good leader, CONSISTENTLY. Not because he had an affair, but because he doesn’t seem to care about the country. Aside from the Brandon Legislation, he has done nothing. In addition, except for his decision to take his girlfriend on a public date, and in the process infuriate everyone who voted for him, he constantly asks for advice. It’s understandable that a president would have an army of competent employees steering him in the right direction, but he always seems los  and has teenage-like tantrums. While Olivia operates following her gut instincts, he goes by emotion and follows nonsensical strategies. Yeah, that is by no stretch of the imagination, the man that America would want at the helm. His priorities are erratic at best.

Mellie, on the other hand, though emotional, seems to be better at dealing with her feelings. She does want the Oval and is hurt, but instead of crushing her cheating husband, as advised, she first chooses not to. As she words it, she wants to start from scratch, like a Congresswoman. She even attempts to do so, only to discover that, surprise, surprise, she will have to play dirty. On  a related note, her white flag exchange with Fitz, when she suggests they stop hurting each other, was one of the best scenes of the episode. Too bad Fitz broke the promise and decided to parade his affair. Only he believes that legitimizing it would do any good.

Cyrus is back on the outs. Mellie understandably fired him after the man went on a full-on rant about his father-son relationship with Fitz, whom he wants to both, school and hug. The man went rampant and decided to compare his broken relationship with the POTUS with Mellie’s loss of Jerry. It was infuriating to watch him deliver the lines that came out of his mouth, and to be frank, though I adore Cyrus, I believe we’ve had enough of his anger-filled diatribes. He is seeking revenge, and like every vengeful story arc in existence, this one is short-sighted, tired, and, ultimately, underwhelming.

Last but not least, there is Jake, who after meeting with Daddy Dearest, enlists Charlie on a mission that takes them to France, where they meet with Jake’s ex-wife, who happens to be a spy connected to art trafficking. The important elements of the development are that she gets shot and survives, and that the two reconnect. It was nice to get some of Jake’s backstory and to have him away from Olivia’s sphere. Jake deserves more than being a lap dog; he is at his best when he is Jake the super spy, not the super lovey-dovey guy.

“Dog-Whistle Politics” was an excellent episode that struck the right chords at the perfect time. Though I still believe Scandal needs some rehab, especially on Fitz’s front, I am relieved that the installment offered a much needed emotional outlet by making Olivia the target of so much loathing from whole country. I anxiously wait to see her fight back.