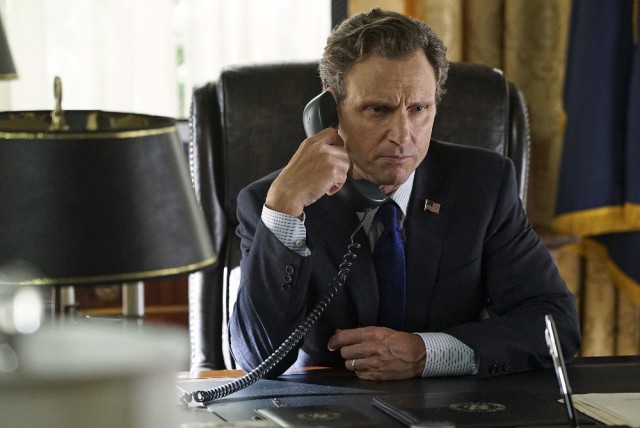 After Sally outed Fitz and Olivia, by exposing leaked pictures of them recklessly being together at the White House, some serious damage control is in order in this week’s Scandal. However, Liv decides to run and hide and, for that purpose, takes a case that has her working remotely. The case in question centers on a silver spoon kid, Gavin, who has fallen off the grid, not casually, after being suspected of killing his rich father. Because the approach this season so far has been “the more cliches, the better,” the client is actually Gavin’s younger-than-his-dad stepmother.

Meanwhile, at the White House, Liz and David scramble to find out who was responsible for the pictures going public–a clear inside job–while Abby is the only person who realizes that the priority is to placate the press. With no help and Fitz cranky because Olivia ran, Abby is eaten alive by the media.

Since the White House proves to be inept at handling the media crisis after the affair is unveiled, Mellie pays a visit to her husband and offers her services as First Lady/front, but demands an apology for the way he delivered the divorce papers to her. Not only does Fitz reject her proposal, which is utterly ridiculous considering that he is in a world of trouble, but he even accuses Mellie of being behind Oliviagate. The man has questionable instincts.

In the meantime, Huck is back into the Gladiating game, claiming Jake, who’s also rejoining the team, “fixed him.” Quinn is a bit fast to let them through the revolving door that seems to be in place at OPA, although it is hard to blame her, since without Jake and Huck, she was the sole Gladiator holding the fort.

Back to the case of the week, Olivia gets to Gavin at a casino. Initially, he thinks she is a prostitute, but when she handcuffs him to his stool, he is sure she is a bounty hunter; in addition to possible murderer and definite sexist, we can add stupid to Gavin’s list of traits. The case doesn’t seem to be the type OPA would take on. Even if Olivia is in need of escaping, she could just drive anywhere, exactly like she did, only with a destination instead of a target. In a way, what the pointless case says, at this instance, is that Liv would pretty much become a nanny to a spoiled brat, who has yet another poor rich boy story. Nothing about the arc was compelling, groundbreaking, or particularly interesting. Not even Jake helping. To make it worse, the fact that Gavin outsmarts Liv and a super special agent by using the oldest trick in the book makes the B-plot dead weight. So much so that its resolution impacts nothing.

Meanwhile, in D.C., Susan gives Fitz a piece of her mind, which is glorious to watch, but not enough to save the episode from its downward spiral. Abby, on her part, talks to Cyrus, who gives her the right advice: be the adult. Sure, it makes Fitz look like (more of) a puppet, but it works. Abby goes rogue and tells the press that Mellie is still living at the White House. On her power high and after getting some help from David, Liv’s BFF then blackmails Liz. She threatens to make public that it was the chief of staff who leaked the pictures unless they become equals. I am not sure if this is a “keep your friends close and your enemies closer” kind of scenario, but I’ll take it. After all, It’s a good deal; the issue is that as far as blackmail standards go, it’s vanilla.

Taking Cyrus’s advice to the next level, Abby also talks to Fitz and makes a point when she notes that Liv not only went away but she was with Jake. The POTUS then decides that he needs to play the political game; he apologizes to Mellie and decides to do a joint interview to deny that he has been unfaithful. After he does that, Fitz calls Liv to let her know that she’s off the hook.

Then, inn what should have been the episode’s “twist,” when Olivia gets out of the car at her building and is asked by the press if she is the president’s mistress, she admits it. Granted, it was not 100% expected, but we could see the writing on the wall. Without that ending, the episode had a few memorable lines here and there, but not much else. Content-wise, we didn’t really learn anything from the characters, THEY didn’t know anything about themselves, and there wasn’t much advancement in anything. Abby would be the one exception to all this, but she is not the lead…

“Yes” was not only a subpar installment of Scandal, but it furthers my concern towards the show. Season 5 so far has been underwhelming and disperse. I hate to say it, but it is starting to look like Scandal is running out of steam. Hopefully, I’m wrong.