Home
Television
Scandal
The Five Most Scandalous Moments from Scandal 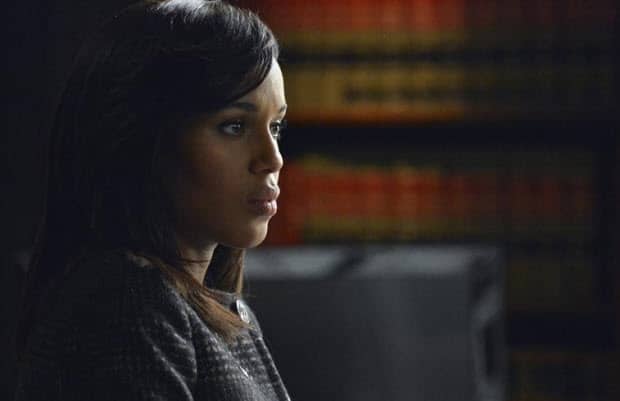 After a long hiatus–OK, just through the winter–one of TV’s greatest shows is finally returning for its third season this week. And since the show Scandal has somehow taken over the airwaves and social media, we decided to take a look back at some of the more scandalous moments the show has ever seen. Hopefully these fill your appetite until the show airs again on Thursday night, 10pm on ABC–or you’ll just have to watch reruns until then. Obvious spoilers follow.

This one was a moment that might not have actually happened in real-time on the show, but put viewers back a little upon hearing it. Although the order was issued by her own husband, Rowan Pope, the one who actually followed through on the order was Fitz, who was the military pilot in charge of doing so. Of course, he had no idea that his future love’s mom would be on-board, but that’s what made this so eye-popping.

After finding out that she’s actually quite the fan of torture–yeah, a bit crazy–Quinn Perkins teamed up with Charlie to have a little fun. Of course, that type of entertainment included Quinn killing a security guard and being caught on a surveillance camera as evidence over her head, but that’s just a small detail. Seeing it be Charlie as the one holding her hostage with the evidence over her head is even bigger drama.

3. Mama Pope Was a Terrorist

Let’s not confuse things here, because while Olivia’s dad Rowan Pope is made out as the bad guy in all this–which he certainly is–hearing the news that her mom was in on the action was a bit of a twist. Sure, Rowan may have kept his wife on lockdown, but after seeing this news, it might have been for a very good reason. Once Olivia realizes that her dad isn’t the real monster, and that he was just trying to protect her the whole time, it probably blew everyone’s mind.

After seeing photos of her very much in the closest husband Daniel and James Novak, the Vice President wasn’t in any mood to just discuss things, instead choosing to go completely crazy and murdering hubby. It was a shocker to audiences, who now had to accept the face that the Grant campaign had yet another secret that people on the show didn’t know about.

As anyone who remembers from the real-life story of former President Bill Clinton and intern Monica Lewinsky knows, once the media gets ahold of a mistress’ name, all bets are off. So it was more than shocking to see that President Fitz was actually the one who spilled the beans to help free Olivia from the secrets they had together, while also trying to out maneuver his wife Mellie from doing so. As the show has shown, though, it didn’t really work out as planned.