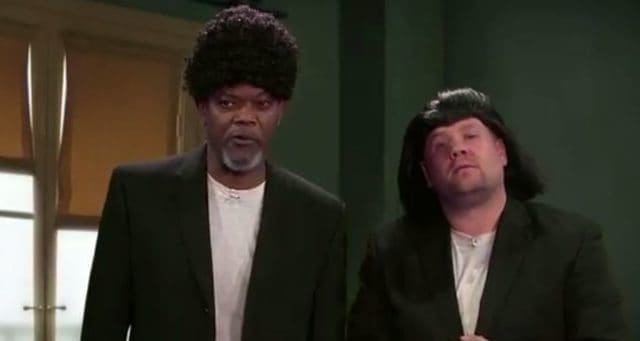 Only a few short hours ago I reminded all of you that Samuel L. Jackson is worth a whopping $170 million and that his career has spanned over 40 years.  So it was only fitting that Jackson happened to be a guest on The Late Late Show with James Corden last night.  As part of a running segment that Corden does, Jackson was asked if he’d be willing to recreate some of his most iconic characters from movies.  In the segment Jackson recreated Pulp Fiction, Jurassic Park, Snakes on a Plane, Django and others.

First of all, it was incredible to watch a 68 year old Jackson recreate his famous “before I murder you” speech from Pulp Fiction.  However, I have to hand it to James Corden for remembering to include Coming to America.  If you’ll recall, Jackson wasn’t a huge star at the point in his career but he made audiences laugh uncontrollably in theaters when he played a restaurant thief that gives Eddie Murphy a few choice lines before Murphy winds up teaching him a lesson.

There’s absolutely nothing to dislike about Samuel L. Jackson.  This guy is a true treasure.  Check out Jackson and Corden below: