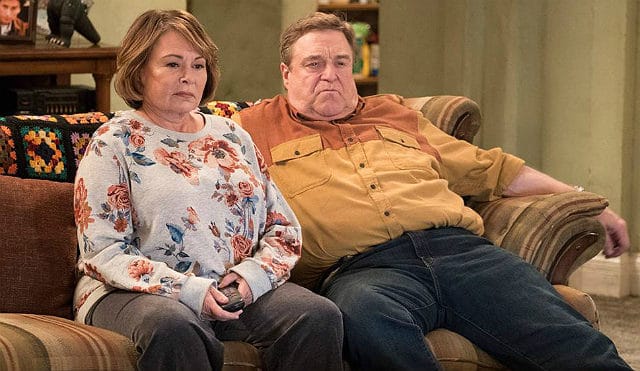 Comedian Roseanne Barr, the star of the original and rebooted ABC sitcom Roseanne learned a painful and expensive lesson.  The president that she’s an outspoken supporter of is the only public figure allowed to tweet racist nonsense and not get fired.  Even worse for her is that she got a bunch of people fired – because ABC rightfully canceled her show.

The beginning of the end all started this morning when Barr tweeted this.

The “vj” she’s referring to is the former Obama adviser, Valerie Jarrett.

It didn’t take long for the dominos to start falling. Within hours ABC canceled Roseanne –  it’s most popular sitcom – and her agency, ICM, had dropped her.

When ABC decided to reboot Roseanne both the producers and the network had good intentions for the show.  This is a statement from Barr from an ABC interview she did to promote her show.

I really hope that it opens up civil conversation between people instead of just of mud-slinging. I really do because I think we need to be more civilized in that.

I’d hate to see what she thinks “uncivilized” conversation is.

Then again, Donald Trump, whom she supports as president, has said and vile and racists things for decades. He has continued to do so as POTUS.  The most vulgar of his unpresidential statements is probably referring to African nations and Haiti as “****hole” countries.  There’s also claiming that some Nazis and KKK members are “fine people.”  During his campaign, he claimed that most of Mexicans coming over the border were  “rapists.”

Yet, despite the things he’s said in the past, Trump got elected president.  On Twitter, the President continues to call people names, including calling Senator Elizabeth Warren “Pocahontas.”  For those taking their cues from President Donald Trump, racism is fine and so are racial slurs.  His supporters continue to stand by him. Even worse is the general language being used by some people on the right  – and on the left.  It’s reflecting more of his racism and coarseness.

Still, Barr took things to the lowest of the low.  Even President Trump seems to know enough to not refer to a black person as an ape.

The Wrap Up: Roseanne & Her Show Had to Go

ABC really had no choice but to cancel Roseanne.  For one, the online reaction was swift.

When a black woman @jemelehill calls a white man, @realDonaldTrump a 'white supremacist' she gets suspended by ESPN

When a white woman, Roseanne, calls a black woman, Valerie Jarrett, an ape & a terrorist, she gets ignored by ABC#SuspendRoseanneNow

It’s also not like this was the only incident she’s ever had.  ABC took a big chance with Barr – because everyone knew her history.  For instance, there’s the 2009 photo shoot where she dressed like Hitler standing in front of an oven eating cookies that looked like people.  Also, Deadline noted it’s not even the first time she’s tweeted something like she did this morning.

Of course, both of these things were done before she had the backing and platform of a major network TV show.  Barr seems to have forgotten that being on TV makes you a “brand” of that network – not just a private citizen.

ABC took the chance with Roseanne for the good reasons.  We did need a show that reflected the views of Trump supporters and that could open up civilized dialogues.  Unfortunately,  the Roseanne off-screen doesn’t have a decent writer.  The racist views she expressed are anathema to the majority of Americans, who, by the way, did not vote for Donald Trump.

The overt and ugly form of racism displayed by Roseanne Barr isn’t what ABC signed up for.  I guess they were hoping her past wouldn’t be her present.   Since it is, no matter how good the ratings of the show, neither ABC nor her agency could continue to support her.

Nevertheless, the speed in which it happened was heartening.  This is a good moment for Hollywood, and maybe for America. At least now there’s some semblance of a line that should not be crossed.