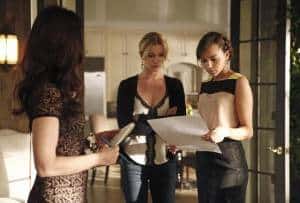 evenge finally returned from hiatus this week with an episode that continued to prove why this show is so delicious. Let’s just get right to it, shall we?

Let’s Play “Pin The Murder on The Donkey”. The way I see it, the main difference between Emily and Victoria is the way in which they react to situations. Emily is more of a “set up a plan and see it through methodically” kind of girl, while Victoria is a “let’s try everything crazy and see what sticks” woman. Clearly Victoria isn’t happy that Daniel is being charged with Tyler’s murder, but instead of sitting back and letting their high-priced attorney (Ben) do his job, she decides to get creative. When Charlotte can’t accurately describe the hooded figure she and Declan saw on the beach, Victoria uses her uncertainty as a way to frame those she thinks is guilty.

She first suggests that perhaps Charlotte saw a woman that night (ie. Amanda). When Charlotte and Declan deny that, she has the sketch artist draw up a photo of Jack Porter. Naturally, Emily is horrified at the possibility of Jack becoming embroiled in the murder drama, but Victoria seems to feel no guilt about playing with people’s lives. The moments of humanity we see from her are so often overshadowed by her self-preservation instinct, which drives her to make terrible and rash choices without thinking of the consequences of her actions.

Fortunately, Emily is thinking about the consequences of Victoria’s actions and she suggests they bring in Mason Treadwell as a spin-doctor to sell the “Amanda is guilty as hell” story. She has Nolan go retrieve him from obscurity and deliver him unto Grayson Manor, where he’s set up with an office, a bedroom and a brand-new blog, The Treadwell Report (yes, it’s a real site that Revenge set up).

Good Help Is Just So Hard to Find. While Mason is off trying to scare Jack into giving up information on Amanda, Victoria decides to take rash action #2 for this week’s Revenge. A trial date is set for December, but Victoria doesn’t want to leave Daniel in Rikers for the next few months. When Ben lets it slip that the judge will only consider letting Daniel out on bail if he has a life-threatening condition, Victoria decides to manufacture one. 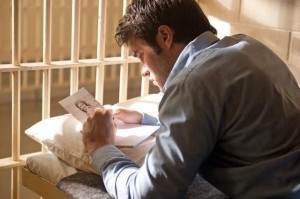 She calls up her hired goon – because even proper, rich ladies like Victoria have hired goons on speed-dial – and has him arrange a beating for Daniel in the prison showers. Poor Daniel puts up a bit of a fight, but his opponents outnumber him and he suffers relatively serious injuries. Later, Victoria and Emily head to the prison when they find out about his condition and you can tell Emily is already suspicious about Victoria. She follows her to a bar and spots her paying off her goon. Instead of directly confronting Victoria, Emily proves that she’s far superior at scheming by coming up with a Plan B.

Victoria’s Got a Love-ah. You know who else happens to be at that very bar with Victoria and her goon? A smoldering artist named Dominik, who just so happens to be a former boyfriend of Victoria’s. The two glance at each other across the bar (the stares were a bit much, to be honest) and then they head to Dominik’s loft for some serious sex. Not a great deal is revealed about their previous relationship except the fact that Dominik clearly has the hots for Victoria and spiraled down when she left him to marry Conrad. Since then, he’s become the prototypical brooding artist, complete with forgery and drug charges. Yet, Victoria can’t stay away from him and his bedroom eyes.

Teenage Angst Reaches New Heights. After Treadwell confronts Jack about Amanda’s involvement in Tyler’s murder, Declan decides to step in with Operation Protect Big Brother. The only way he can think of to get attention off Jack is to discredit Charlotte’s memory of that night by revealing her new prescription drug habit. At first, Treadwell seems more concerned about Charlotte than exposing her secrets. But then Emily steps in. Pretending to be Amanda, she anonymously IMs with Treadwell, telling him that Victoria stole his interview tapes and burned down his house. Treadwell is livid.

“Hi Honey, I’m Home”. Daniel manages to get out of Rikers on $10 million bail, although he’s under house arrest for the duration of the trial. Considering the house is over 20,000 square feet, this hardly seems like punishment. Emily seems genuinely concerned about his beaten and bruised face, but the situation has already hit a set-back, as Victoria discovers when she returns home from her sexy times with Dominik. Incensed at Victoria’s betrayal, Treadwell posted an article that exposed Charlotte’s drug habits and had Declan denying that they saw anyone on the beach that night. Ben bemoans that Daniel’s entire defense has now been ruined, which leads me to wonder whether he’s worth the $1000 a hour he’s likely charging. You’re a lawyer, Ben. Come up with a new defense and you shouldn’t have put all your eggs in one basket. It’s your JOB, man.

Victoria immediately confronts Charlotte and is furious that she has decided to stay home and get high instead of going to school (but that’s because she saw the blog post, got furious at Declan and then decided to take some pills). 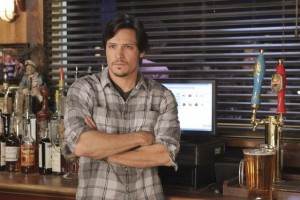 Jack Won’t Give Up. Throughout this week’s Revenge, Jack couldn’t give up his search for Amanda, so he had Nolan hack into the bank records about the wire transfer paper he found. Nolan suggested he head to Montreal to see if he could stake out the bank and find Amanda. Where is she? Safely hidden away with Takeda, but Nolan is concerned that Emily’s sensei may release the volatile Amanda if he finds out that Emily is working on trying to free Daniel from prison.

Devil in a Brown Wig. Daniel’s defense may be shaky, but Emily’s out there going to great lengths to defend her boys. Armed with a long brown wig, she chats up Victoria’s goon in a bar until he reveals exactly what he did for the Grayson matriarch. She lures him to an alley and beats the holy hell out of him, declaring “That’s for Jack” and “That’s for Daniel” as she kicks him unconscious and steals an impression of his key.

Uh-oh. Could Emily’s feelings for Daniel be just as real as her feelings for Jack? I think we’ve got a genuine love triangle on our hands here, Revenge fans. Takeda was right, Emily got far too involved in her plan.

Overall, this was another solid episode of Revenge (although I could do without more Victoria-Dominik staring, because it just makes me giggle). A new episode will be airing on April 24, so watch a preview here.

For all of our coverage of the show, including sneak peeks, photos, spoilers and more, browse and bookmark our Revenge page. You can also watch the newest episodes from Hulu there.