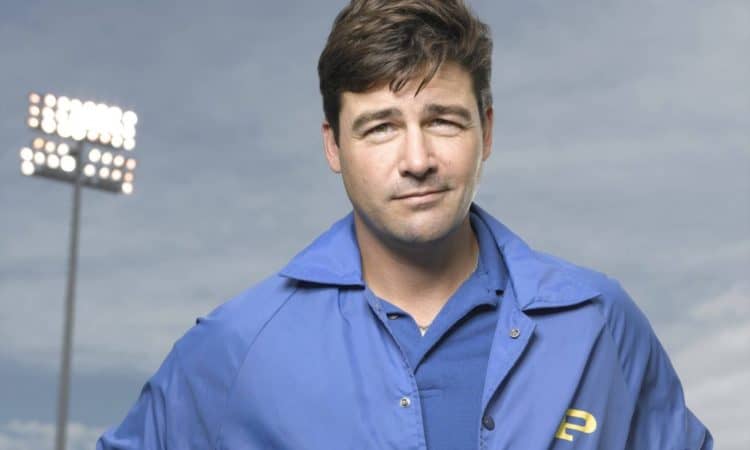 When Friday Night Lights debuted in 2006, it didn’t take long for the show to gain popularity. The series was set in a fictionalized version of a ghost town in Texas called Dillon and it followed the local high school football team, The Panthers. The team was led by their tough but likable coach, Eric Taylor (Kyle Chandler) who was also a dedicated family man. In the first episode, the school’s star quarterback, Jason Street (Scott Porter) is paralyzed during a tackle which becomes a major plot point during the show’s first season. However, lots of other storylines are implemented throughout the show. While football is always at the center, the show follows the lives of the characters off the field as well. During its five seasons on the air, Friday Night Lights gave us some of the best TV characters of the mid-2000s. When the show ended in 2011, lots of viewers were disappointed. Now that reboots are becoming so popular, some are hoping that Friday Night Lights will get another chance. Although there’s no official word that the show will be coming back, we think the possibility should definitely be considered. Keep reading for 10 reasons why the TV series Friday Night Lights should get a reboot.

Why Was Friday Night Lights Canceled?

When Friday Night Lights was added to Netflix in 2021, there was a renewed interest in the show. Many people have started to wonder why the show was canceled after its fifth season. In reality, however, the show actually almost got canceled much sooner. The ratings were so low after season two that NBC almost decided to get rid of the show. However, thanks to the support of fans, NBC was able to make a deal with Direct TV’s 101 Network. Starting in season three, episodes aired on the 101 Network first before being broadcast to NBC. Despite the support of fans, the show’s ratings remained low which ultimately led to the final decision to cancel the series.

1. Fans Would Love To See How Philadelphia Worked Out For The Taylors

When Friday Night Lights ended, coach Taylor and his wife, Tami, relocated to Philadelphia so that she could take a new job as the dean of admissions at a nearby college. Eric had gotten a new coaching job, but it was clear that the overall vibe surrounding football was much different in Philly than it was in Texas. After all of these years, it would be nice to know how the couple ended up living life in the northeast. Did they stay? Or, did they end up going back to Texas? Of course, there’s no way an entire reboot could be centered around what happened to the Taylor family, but it would still be nice to know.

2. The Show Was A Critical Success

When Friday Night Lights was on the air it wasn’t just well-liked among viewers. Critics also praised the show. In fact, to this day, the show has a 97% rating on Rotten Tomatoes with the final three seasons having a perfect 100% score. Gil Kellerman of Collider wrote,

“Sure it’s soap, but you could argue that pretty much every scripted drama is soap (okay, the character-based ones, anyway. Back off, NCIS fans). The difference between Friday Night Lights and so many other humdrum, forgettable “soft” dramas (and you know who you are, ABC lineup) is the strength of the writing, the believability of the actors and characters they play, and ultimately, how effectively it’s all put together.”

If the original writers were willing to come back, a Friday Nights Lights Reboot could prove to be just as powerful.

3.  The Series Still Has A Strong Fanbase

It’s been a decade since viewers said goodbye to the Dillon Panthers (and the East Dillon Lions), however, many people are still talking about the show. The fact that Friday Night Lights continues to have a dedicated fan base means that a reboot would have a built-in audience. Being added to Netflix has also given the show a second wind of sorts. That said, the reboot would have to live up to some pretty high expectations, or else fans will lose interest. Plus, just because people enjoyed the original series doesn’t mean that they’d care to watch a reboot.

Reboots can be challenging because there’s always a fine line between paying homage to the original show and branching out to include new storylines. On one hand, Friday Night Lights’ ending left a lot of unanswered questions, but on the other, it just means that there is plenty of room to explore if they ever do decide to do a reboot. For example, a reboot could focus on the next generation of Dillon Panthers and use Billy and Mindy’s kids as a way to tie back to the original. This would allow the reboot to have its own identity while still keeping that connection.

5. The Show Finished With Lots Of Loose Ends

Creating new storylines is one way that a reboot could be approached, but there is also lots of opportunities to revisit some of the original storylines. For example, are Julie and Matt still together? What happened when the Lions and the Panthers formed one big team? It would be unrealistic to see all of these storylines get revisited, but it would be nice to know what some of our favorite characters have been up to since 2011.

6. You Don’t Have To Like Football To Enjoy The Show

If you’re not a football fan, you probably don’t naturally gravitate towards shows about it. However, one of the things that made Friday Night Lights so special is the fact that you don’t have to be interested in football to fall in love with the show. It may have been a sports show on the surface, but the show was about much more than that. In many ways, football became a tool to help the players learn important lessons about life. Ironically, this is also how high school sports tend to work in real life.

7. The Show Could Work With A New Cast

In the years since Friday Night Lights’ final episode, many of the stars of the show have gone on to do other things. As a result, they may not be interested in or available for a reboot. After all, the chances of someone like Michael B, Jordan reprising his role don’t seem very likely. That might not be a problem, though. While it would be nice to have as many of the original cast members back as possible, a reboot could potentially work without them. As mentioned earlier, the show could focus on a new generation of high school football players in Dillon. In reality, a reboot might work the best this way.

8. The Show’s Premise Is Timeless

There are lots of shows that were big hits during their time but failed to age well. This has caused an issue for a number of reboots because the premise of some shows simply doesn’t work as well today as it did several years ago. That, however, wouldn’t be an issue for Friday Night Lights. The high school experience and football are two things that will likely always be relevant in American culture. On top of that, many of the storylines in the original Friday Night Lights were handled in a way that would still be considered appropriate today.

9. The Show Covered Some Important Topics

10. It Might Just Be The Greatest High School Football Show Of All Time

Unfortunately, though, the chances of a Friday Night Lights reboot seem pretty slim – at least in the near future. Although there has been talk of a possible sixth season, nothing has been set in stone. There are also people who don’t think that the show needs to come back. Even one of the show’s stars, Connie Britton, was quoted saying, “…we know we’ve already had a movie, we already had this TV show, and then if they were to do it again with like a whole different iteration of it, I don’t know. I would think that would be sort of odd.”