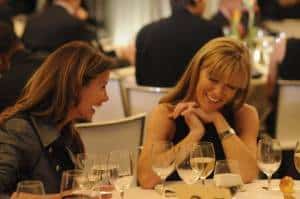 Tonight’s Real Housewives of D.C.‘s theme was all about home, whether it was looking for one in a literal sense, cleansing your home, protecting your home (or your closet in Mary’s case), or yearning for home. Either way, the drama and gossip still flood more fluidly than the wine at the Oasis Winery.

Michaele and Tareq are looking for a new house and enlisted Stacie, the best in the D.C. real estate biz, for help. From gate, Stacie wants to know where the money is coming from to support the Salahis’ price range, because she knows it sure as hell isn’t coming from the winery, which is “defunct”. Tareq claims that they will fund the house through the business, but which one that could be is beyond me, because all of them are not bringing in money. Ask the people they owe. They will tell you.

When Stacie hears about how Tareq’s family is as dysfunctional as they come, I can’t help but correlate Tareq’s drama to a season of Falcon Crest. Seriously. Every time he mentions his mother, I can’t help but see Angela Channing making phone calls to the police to get Tareq off her property.

Later in the show, Tareq and Michaele arrive at Oasis and they don’t even sit down long enough before the cops come running. Michaele is an emotional wreck from all the hate in the Salahi family, which makes me think is the true source of her scatterbrained nature (and maybe her weight issues). Just saying.

Stacie is pretty much minding her business cooking until Jason comes home and brings up her search for her birth father. While Stacie considers herself stuck in a rut since her birth mother won’t cooperate, so Jason comes up with a backdoor plan that might not sit well with people. He found Stacie’s half brother on Facebook and asks Stacie to contact the brother instead to get the mother to talk. While I love these two people, I think this is a horrible idea, because lives can be crushed by this decision. I think it’s time to let bygones be bygones and chalk this up as a loss. Then again, another part of me says to do it, which Stacie tells Jason to do.

Lynda is preparing to move into her new home, which happens to be near Mary’s humble abode, but she has to secure her house 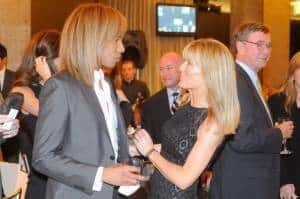 physically and spiritually first. To get this done, Lynda buys a German Shepherd puppy to guard the house, because her little pug just won’t do. I don’t think the thing can see straight, myself. Next, Lynda, who is heavy into astrology, has her house cleansed for her own aura to take residence. She has the rooms saged and doused with holy water to the point you would think that the place was haunted with malevolent spirits instead of humble owners. Maybe Teresa could do this technique if she has to leave her home and move into another home one day. Just saying.

Mary is still having problems with Lolly taking her clothes from her lockdown closet, which Mary claims is a task to keep closed. Cat balks when Mary says the closet lock was her psychiatrist’s idea, because of issues dealing with Mary not having a handle on Lolly due to Mary’s sister being the same age as Lolly. I know I might’ve got that convo mixed up, but still the bottom line was Mary’s losing clothes to Lolly and doesn’t know what to do about it. I have plenty of options, but I would be writing all night.

Cat unfortunately lost a close friend in this episode and spent most of her time trying to mourn, but keep her composure at the same time. She fails when she goes to the Men Against Breast Cancer event, which is where she see’s Lynda’s ex and freaks out, because the guys dresses just like her recently deceased friend. Cat is embarrassed and talks to her daughter about breaking down, which is something she doesn’t like to do.

Mary and Rich invite the Turners over and they discuss the lies the Salahis made on Lolly. I equate this incident as D.C.’s answer to New Jersey’s Brownstone incident until the White House Gatecrashing incident is aired, which I have dubbed D.C.’s country club/Weavegate incident on New Jersey. Anyway, the two couples talk about how the Salahis are trouble starters and how inappropriate the whole scenario was until Mary claims to know something about Tareq’s past. That big secret? He was a trouble making punk growing up and was sent to boot camp to straighten up. Womp, womp. Obviously, boot camp didn’t help the social sociopath, but it’s not as earth shattering as one would think.

Next week’s much touted debate on gay marriage should be interesting, as well as Cat’s showdown with Stacie’s friend Erica, but is it just me or is the behind the scenes drama dealing with the D.C. housewives more interesting at this point? I have defended the D.C. cast from day one, and I still do, but I can’t help but feel more interested in the behind the camera politics at this point in the game. Your thoughts?