Tonight’s Real Housewives of D.C. ushered us to the event that we have been waiting for all season long, which is the infamous White House Gatecrashing incident featuring Michaele and Tareq Salahi and the red sari (which has become an icon on its own). While the Salahis’ prepped for that event, which seemed like the entire episode, the other D.C. Housewives had their own drama. Well, it was makeshift drama, but drama nonetheless.

Are You My Daddy?

Stacie went ahead with the ill conceived plan of Jason’s to contact her birth mother’s son on Facebook, which I think is just wild. I mean, think about getting an email from someone claiming to be a long lost sibling. That has to be one hell of a friend request.

Stacie eventually found someone who happened to be from the same area as Stacie’s father, which is not much of a long shot given that the woman and Stacie could pass as sisters. Now, to be honest, I don’t know how in the world Stacie got from Point A to Point B in this scenario, but I’m glad she’s getting a lead in her search that doesn’t require hiding behind a computer hoping for the best, causing nervous breakdowns over dinner.

After her agency is picked to host an international fashion show, Lynda goes to the lengths to make sure everything is perfect. But the one thing she worried about the most was blacklisting Michaele and Tareq Salahi from the event. She even went as far as making sure security had pics to go by in case the Salahis happened to showed up. You would’ve thought the Salahis were international terrorists ready to bomb the party at any moment by the way Lynda carried on about this, but she has her reasons and she’s sticking with them.

Mary backed Lynda’s Salahi-ban, mainly to keep Lolly (and herself) away from interacting with the couple ever again after the FBI accuasation. She also kept bringing up how much Lolly wanted to “pound” the Salahis on sight if she saw them. I seriously doubt Lolly would do anything that drastic, and by the end of the hour Mary’s warnings of Lolly’s rage became empty promises that I eventually tuned out.

The Moment of Truth

As the Salahis prepped for the eventually life altering event, the other ladies gossiped about the Salahis’ past deeds misdeeds, which made it feel somewhat like forced foreshadowing of something about to go wrong. Michaele was like a finch on speed as she hugged everyone and proceeded to tell them about the “super secret dinner”, which lets us know to never let Michaele in on our deepest darkest affairs. Everyone at the salon, from the hostess(?) to the hairstylist, heard about the State Dinner and how Michaele called the White House social secretary to see what would be appropriate for the India inspired dinner. Now during all this excitement, one has to ask themselves if Michaele actually knew what she was talking, because one moment she’d be describing what usually goes down at a State Dinner, and in the next/same breath admitted that she was clueless about other aspects of the event. Now here is when red saris flags start flowing:

#1 – The stylists asked to see the invite, which Michaele couldn’t produce, claiming to have lost it. How does one lose an invite to an event that prestigious? I’m not even going to try to fathom an excuse, analogy, or another minute on that question.

#2 – Tareq explained how said invite is just something formal from the White House, which you can hang on the wall afterwards. Basically, “you don’t need it.” I go into a blinking fit trying to process this after I hear it. If I still didn’t hear it right, then you know now that I at least tried. A White House invitation is not the equivalent to a 6-year-old’s Rose Art and construction paper inspired birthday invitation. It’s not even an e-vite, Tareq!

#3 – When Bravo has to edit in the producers of the show asking Michaele where is the invite, something reeks of controversy and a PR nightmare. Bravo knew they weren’t attending a sweet 16 party or some feuding cast members wedding, they were messing with the Feds, the President of the Unites States of America. In short, a prison sentence. 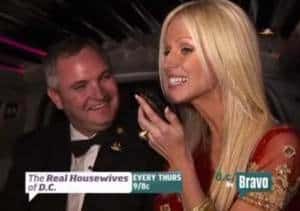 Despite all these eyebrow raising incidents, the cameras still followed the Bobbsey Twins to the White House and made history in the process, pissing off the American public, as well. So did the episode vindicate the Salahis? Hell no. It only instigated just how much these two are not in touch with reality, making their case even go from worse to abysmal.

Next week is the finale, followed by a supersized Watch What Happens Live! with Andy Cohen that will feature the Salahis and NeNe Leakes. I’ve seen in taped interviews that the Salahis have learned the ‘graceful’ art of dodging questions and know how to use editing to their advantage, but this will be a live show, with questions from the public and NeNe Leakes possible commentary of the whole debacle. In short, I suggest you stay for Watch What Happens Live! after the finale airs.

What are your thoughts on the whole debacle? Should we wait to see how events pan out next week? Or is the damage already done?