Tonight, Cat managed to not only piss Stacie off further, but also ruffle Mary’s feathers as well. Lynda and Michaele don’t waste any time to get their differences out the way while Paul and Tareq stand witness, and we learn about Jason’s (Stacie’s husband) patent on a penile measuring tool. With this much crazy going on it must be a Thursday night on Bravo.

Michaele is showered by gifts from Tareq, which included handbags, evening shoes, daytime shoes and even lunch sunglasses. And to top it off, Tareq gives Michaele a pony, which she names Sparkle. Tareq’s response to his wife’s lavish birthday gifts? “You can’t say no to her.” I bet you I could, Tareq. By the way, here’s Joe Guidice’s number. You two should talk.

Michaele later visits Paul Wharton and his birthday is right around the corner. The two decide to throw a classy birthday bash together and Michaele agrees to play hostess for the event. When Michaele goes to the Four Seasons with Paul’s entourage, she is reminded by one of Paul’s assistant how Lynda did a bang up job with Paul’s 30th birthday blowout. I am beginning to see Paul as a figurehead in a lot of Lynda vs. Michaele drama.

When it comes time for the party, Paul calls Michaele in 30 second to 1 minute intervals to find out her whereabouts. She is the hostess after all. She doesn’t pick up and Paul remarks how Lynda was available 24/7 when she was hosting his other party. All of the other guests arrive on time, but the Salahis arrive loudly with a 1970’s Limo and a police escort. Lynda thinks it is all in bad taste given that the Salahis are broke, according to her. After Paul arrives (in a regular and less boasting manner), he finds Michaele who says that her phone had been blasted all day due to his party, which I don’t think is a good excuse and it seems like Paul might would agree.

When everyone settles down, the Salahis call attention to give a toast, but to Lynda and Mary, the toast takes away from the guest of honor: Paul. Lynda also notices that she is sitting too close to where the Salahis stand and freaks when she notices that Tareq is about to sabrage the champagne bottle. Tareq claims that he didn’t know they were going to place Lynda there, but aims the bottle at Lynda as she cringes anyway when the cork hits her butt. She complains big time, but really gives a slap-worthy comment when she badmouths the Salahi wine. Michaele picks this as the perfect time to ask Lynda about the remarks made about her weight and they have a little spat that Lynda wins easily before walking off, leaving Michaele still stumbling over her words. Poor Paul was left standing in the middle of them… Personally, I would have to side with both of the ladies as Michaele was right about Lynda coming to her instead of through Paul, but Lynda was right about not trying to ruin Paul’s party to settle a vendetta. Aye yi yi!

Cat vs. Stacie: Round Two

Stacie decides to give Cat a second chance and invites the British import to a dinner at a relative’s house. Other people invited are Mary, Rich, Lynda, Ebong, and Paul and they all mesh well with Stacie and her family, all except Cat that is, who immediately tests the guests when she demands a drink as soon as she gets there. Then moments later, she doesn’t want the drink provided. What the hell?

Cat doesn’t say much and looks like a starving Ethiopian in the middle of a high school prom, so what does she end up doing? Leaving as soon as she clears her plate and she doesn’t even say goodbye to Stacie, who takes the action as a complete slap to her face. Stacie now has two strikes against Cat, but prays that Cat’s cold, rude behavior has nothing to do with race, which Stacie thinks is an invalid excuse. Jason thinks she’s rude in nature and doesn’t know any better. I love the Turners.

Cat later states that she hopes she and Stacie can get along better in the future and feels bad for her abrupt nature. Too little too late?

Meanwhile, Jason decides to tell Ebong and Rich about his patent on a ‘penile volumetrtic measuring device’, which throws the two other guys off on two separate planes of thought. Rich feels uncomfortable talking about penis sizes with two tall, big-footed black men, while Ebong just feels uncomfortable talking about penises, or measuring penises, period. Jason throws in a joke about Paul maybe liking a job where he measures penises all day. I would have loved to have seen the reactions on Paul and Jason’s faces as this line was uttered.

Mary, the Shedding Dog, and the Judgmental Cat

Mary complains about her oldest daughter Lolly’s dog, who is shedding balls of hair all over the place on top of leaving dog droppings all over the yard. The Amons’ housekeeper, Rosa, is cleaning up after the thing, which has Mary in a tizzy.

Mary meets up with Cat for lunch and the two discuss Michaele’s invite to go horseback riding, but spots Lolly working at the restaurant where they are eating. Mary brings up Lolly moving back home after a year on her on and bringing the dog with her. Mary doesn’t get all of that out before Cat starts taunting her for letting Lolly move back in with her and Rich. Cat thinks it is ridiculous and calls Lolly over for a bit of the sarcastic tongue lashing as well. Mary is not amused, but does Cat notice? Not a chance. That’s two down, Cat.

Mary and Cat decide to take up Michaele’s offer of a day of horseback riding, but neither are really up for the task. When they get 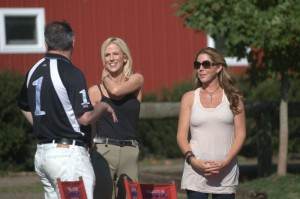 there, they feel underdressed when they see Michaele in her riding outfit. Tareq is there to give them lessons and in the end he offers them some of the Salahi wine from his vineyard, which Cat calls out as straight up beer. Tareq claims he was testing Cat, but come on. I’m not one iota of a wine expert, but I could tell that was beer from here at home. Anyway…

So besides Lynda informing us that her personal assistant is actually her daughter in law, that’s it for this week. What did you think? Was Cat in the wrong when it came to Stacie’s family? Or was Stacie overreacting? Michaele or Lynda? Place your bets, because it’s about to get even uglier…