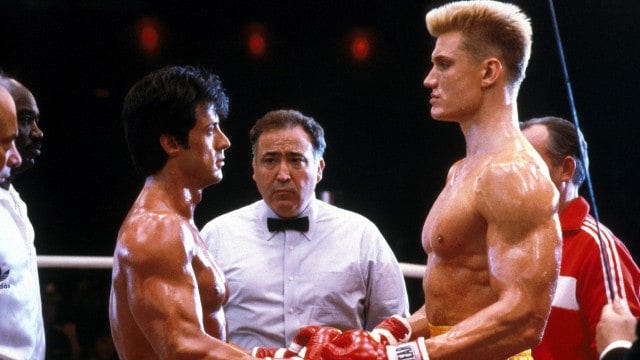 One of the things that all of the Rocky movies are known for is the training sequences. And they all usually start with Rocky not being in fighting shape. He always winds up giving it some kind of measly effort in the beginning before Adrienne kicks him into high gear. But which sequences are the best?

I used a number of criteria in determining my picks. Some of those include music, humor factor, unintentional comedic activities and a number of other ones. Here are my picks for ranking the training montages in the Rocky Movies.

*Creed doesn’t count as a Rocky movie.  It is in it’s own category but don’t think I forgot about it.

First of all there are 2 montages both being amazing. You’ve got your regular montage where Rocky is trying his best, chopping down trees, running on mountains, old school vs. new school. But then you have pump up training with the song “Hearts on Fire.” When he crunches that picture of Drago, you know you’re in for a great fight. The music pumps you up and the whole Cold War theme is pretty sweet here. I gotta give this the one spot, though it was a tough decision.

This is the scene after Adrienne says “win, win!” and then Micky says “What are we waiting for? Tickets!” Does he say tickets? I still don’t know to this day. Well whatever he says, it’s awesome. The log carrying and chicken catching were also incredible. And he does pull ups in a kids playground! Plus you got the whole running up the steps thing but it’s actually better than the first one because all those kids follow him and that kid screams “go, go , gooooooooooooooooo!”

I think I actually like the 100% blatant African American toned music for when Clubber Lang is training better than when Rocky trains in this movie. When Mr. T is doing those chin ups, it’s pretty boss. However, this one goes to the humor category. One of the funniest and best scenes of any Rocky is when he and Apollo race and then frolic in the ocean together. That and when Rocky throws Paulie into the swimming pool. It’s just funny that the theme of this movie was “the blacker a boxer you become, the better off you’ll be in this fight.” While it was a great sequence I couldn’t give it number two because it’s kind of a joke. Rocky II was a little more serious.

Some people might argue that the first Rocky should be higher up, simply because it’s the first and is a classic. However, the only real good training stuff is when he eats the raw eggs and runs up the steps. Face it, the training scenes evolved and got much better after the first one. Yeah sure he hits the raw meat but there’s no music! By the way the “Gonna Fly Now” music definitely has an 70s and 80s adult movie feel to it.

I got two words for you. “Hurtin’ Bombs.” That is all.

I’d like to just think this movie was never made. God this is awful. “Go For It!” I’m gonna be sick.