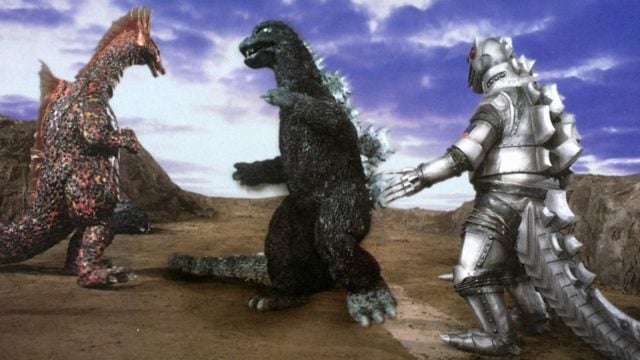 Godzilla is coming back to the screen eventually and this time it seems as though we’re going to see an old classic that people have been waiting on for a while. That’s part of why the five best Godzilla movies of all time, subjectively, could be pertinent right now. The giant lizard has been a fan favorite for a very long time and has had some truly memorable battles throughout his long history. But everything he’s been through kind of pales in comparison to what Godzilla is and the terror he can inspire just by uttering his name.

He’s earned his title as King of the Monsters.

There have been a few different versions of Godzilla throughout the years and not all have been great, but each one has had its own distinctive style. This one in particular looks just nasty, mean, and somehow capable of spawning other creatures if you look closely enough. In the history of Godzilla this might be the oddest representation, which is saying a lot, but it’s also one of the most terrifying.

So how do you take down a giant, fire-breathing lizard? You send in your own monster to combat him and hope for the best. The only trouble is that while Godzilla did get roughed up in this fight, Mechagodzilla was the one down for the count unfortunately at the end since Godzilla’s limits are far greater than the machine could handle. When it comes to sheer anger and strength, there aren’t a lot of creatures that can match Godzilla.

This is the fight that a lot of people are waiting for now. Some folks say that Kong doesn’t stand a chance since Godzilla is so much bigger than he is. But the truth of it is, Kong is much more of a thinker and tactician, in his own way, than Godzilla. He’ll likely use methods that Godzilla won’t see coming, so long as that breath weapon doesn’t fry him first. All in all though it was a good fight back then and it should be a good fight coming up.

There were a lot of criticisms about this movie and some people even considered it a flop, but if anything it went back to the old school feel of Godzilla rather than the ill-fated Matthew Broderick film in which Godzilla laid eggs and was somehow far more benevolent. This creature went back to his roots and was just plain nasty, though he did serve a purpose as he took down the other big bad in the movie.

There’s no getting around it, this was and still is the best Godzilla movie ever simply because it was the first. No one had seen anything like this creature at this point and the sheer size and ferocity of Godzilla was unprecedented. Watching the creature lay waste to a city was absolutely terrifying as people no doubt wondered if the science behind the movie was in any way accurate.

Godzilla isn’t done yet, not by a long shot.