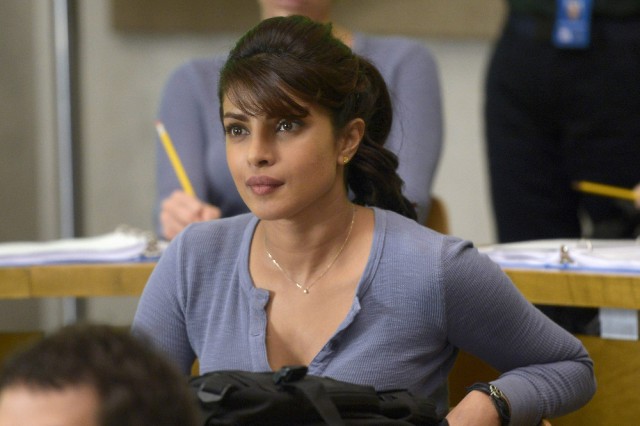 The series premiere of Quantico did a great job of establishing the show’s premise while enticing audiences to stick around for more. In particular, I really liked the structure of the show and its use of flashbacks to help progress the framing narrative in the present. Let’s take a look at the second episode of Quantico, titled “America.”

The episode opens with a look at the interview process during the applications of all of our main characters, revealing that every single character has secrets that we’ll start to learn through the course of the series. Everyone is much more complex than the pilot established (and it established them to be pretty complex), so it’s exciting to think of the reveals that we’ll get down the line.

We then transition into a montage of the second week of FBI training at the titular Quantico, and I enjoyed getting such an intimate look at life at the academy. I have no way of knowing how accurate it is to real life, but it works really well in the context of the world that the show’s building. One of the aspects of The Silence of the Lambs with the most unexplored potential was Clarice Starling’s life at the academy, and even though I know it isn’t the intention of Quantico, this close exploration of academy life helps build the narratives of much material from elsewhere in the media. That’s not something that many shows get the chance to do, and it’s something that Quantico can use to its advantage. Allowing a show to have meaning outside of its own skin is one way to ensure longevity.

Another thing that I really like is how so many of the characters’ secrets are known by certain people in charge, while other secrets are known by other characters. The interesting thing is that many people think that they know everything going on, but it turns out that there’s so much more to the story than they realize. It’s so much fun watching characters live their lives, not knowing how in the dark they really are, and then watching past actions play out in the present/future narrative of the show.

Speaking of that narrative, “America” does an even better job than the pilot did at interweaving the timelines in a way that’s constructive to them both. One of the best examples of this structure in recent memory is How to Get Away With Murder, but I’d almost go so far as to say that Quantico is playing with that format in a much more successful way than the Shonda Rhimes-produced drama did in its first season. We’ve still got a long way to go on Quantico before we’ll know for sure, but the writers are doing a great job with it so far.

Honestly, the best thing that Quantico has going for it is the characters. They’re not only interesting and complex, but the performances by the actors help to make you really care about them, which isn’t as common on television as it should be. There are characters that I don’t necessarily have overly positive feelings about, but there’s also no character that I actively dislike.

I wouldn’t go so far as to say that Quantico is must-watch-live television (at least, not yet), but the first two episodes of the show have been really enjoyable. The nice thing about it is that it’s fun to watch while still having a lot of potential that you aren’t worried will go unexplored. The writers on Quantico seem to have a definite plan for what they’re trying to do, and I’m incredibly willing to wait around and enjoy the ride.

What did you think of “America?” Are you liking Quantico so far? Let us know in the comments down below!