(My apologies for the late recap/review!)

This week ABC offered up a double serving of Private Practice, with “Apron Strings” on Tuesday night in the regular timeslot, and “The World According to Jake” on Wednesday (snagged Nashville‘s airtime).  The two episodes focused on Addison and Jake, respectively, and brought their pasts to the present, bringing them closer.

Let’s try something a little different for this week’s review, shall we? 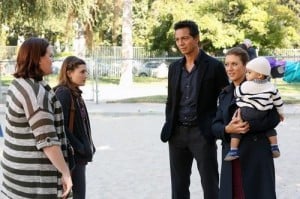 Tuesday night saw the return of Henry’s birth mother Judy.  If you remember, Addison was the doctor who delivered Henry, and gratefully adopted him very last minute.  Judy’s return enlightened Addison on both the back-story behind Henry’s birth, and her own fears about his adoption.  The first introduction with Judy is very awkward, Addison even questions why the woman has decided to be involved now, after months, and the uncomfortable interactions only continue throughout the episode.  Of course, when the issue is discussed at the practice, everyone else dominates the conversation while Addison sits, near-breakdown, exclaiming how she just wants to be Henry’s mom.

The final straw for Addison comes after Judy brings her own mother to meet Henry — without telling Addison.  Jake, being the wonderful man that he is, comes to her defense, informing Judy that she crossed a line.  The meet does reveal, however, the reason behind Judy’s giving Henry up — in an almost clichÃ©d story, a fight with her mother led to her running away before having Henry.  When Judy comes to the practice to apologize for her actions, Addison looses it — frustrated, she tears into Judy about ambushing her, even threatening to take Henry and disappear.

The episode also dredged up an old case of Addison’s.  Her past patient, Shawn, decides to sue her for her daughter’s supposed wrongful birth.  Gwen, her daughter, was born with spina bifida, though she’s only alive because Addison had performed in-utero surgery — through Shawn argues that Addison lied about Gwen’s future, and never informed her properly of the challenges associated with raising a handicapped child.

Caught up in her own anger, Shawn puts Addison’s entire reputation as a surgeon on the line, but Addison knows exactly how to get to her.  Though Shawn’s need for financial help is a matter of the heart, Addison cuts right to the center and suggests that one day Gwen will find out, and will hate her mother for essentially wishing she hadn’t been born.  In mediation, Addison offers to settle for any amount of money Shawn wants…but gets turned down.  Shawn even admits that Addison was right, and never did anything wrong.

Addison’s interactions with her med school mentor Vivian were probably the most beautiful part of this episode.  These two strong, educated women clearly love each other regardless of their own transgressions.

We first meet Vivian through James, when she comes into the ER with gastric carcinoma.  In only minutes, we find out that she’s Addison’s mentor, in-town to give a guest lecture at UCLA.  However, after she meets Henry, Vivian shares her sad past with her mentee — when she was fifteen she had a baby, but never got the chance to hold her before she was given up for adoption.  As the episode goes on, Vivian’s condition gets worse, and yet she refuses further treatment, all with confidence and some semblance of positivity.

When Addison comes to Vivian with her legal issues, Vivian assures her that she has earned the right to be proud of herself.  Her optimism in a dark time drives the storyline to a happy ending, with a very touching montage of Addison’s first moments with Henry paralleled with Vivian narrating a letter to her daughter, that she asks Addison to bring her — which she ultimately does.

The episode ends with Vivian’s passing, Addison finding her daughter and delivering the letter.  Though things with Shawn are still rocky, despite their settlement, Addison pushes the woman’s resume through to Charlotte after St. Ambrose receives a mysterious endowment specifically for someone with Shawn’s qualifications.  Addison even settles her issues with Judy, inviting her to become a branch to their family.

And finally, high on the recent goodness in her life, Addison proposes to Jake.

But, as expected, the screen fades to black, and we’re left waiting for “The World According to Jake.” 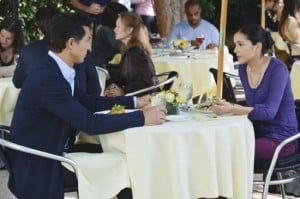 This second episode of the week picked up exactly where “Apron Strings” left of, and the first thing we see is Addison, locked in the bathroom, hiding from Jake because he didn’t give an answer to her proposal.  The two manage to come to an understanding about the situation and are back to their own semblance of ‘normal’ in no time.

While out on a date, Jake and Addison run into his daughter, Angela.  As it appears, Angela is out on a date with her new boyfriend, which is harmless enough, until the two doctors meet the man in question — one of Angela’s professors.  Of course, this new relationship throws Jake into a fit of overprotective-father-ness; he doesn’t agree with the relationship at all, and those around him are left trying to talk him out of doing something drastic in order to preserve his own relationship with his daughter.

Addison, though annoyed in her own right with Jake, convinces him that they should have Angela and her boyfriend, Eli, over for dinner.  Good intensions, but bad execution.  The dinner is horribly awkward, complete with transparent metaphors comparing older and younger boyfriends to basketball teams.   Without thinking, an angry Jake threatens Eli to leave his daughter alone, to which he retorts that he loves Angela and won’t stop seeing her.

Again the episode brought back storylines that we’ve seen before.

Jake’s patient Megan is again trying to get pregnant, and is hoping that this time she’s successful.  It’s clear that Addison still doesn’t like how Jake is letting this woman get her hopes up time after time, especially when Megan starts panicking that she’s having another miscarriage.  Because Jake’s such a great man, he is extremely devoted to his patient, and ends up spending six hours with her in the emergency room after she pleads him to not leave her alone.  Addison is not comfortable with this level of attachment, but Jake argues about his own practices and the fact that he’s not going to change how he practices medicine.

But things change for Jake when Megan calls in the middle of the night, panicking again.  Though Jake shows up, willing to help calm her down, she claims that the two of them have a ‘special connection,’ and tries to kiss him.  Jake of course pushes her away, and when she shows up at the office the next day he gives her a list of other doctors to help her out.  In upset, Megan tries to get Addison to believe that Jake made a pass at her, but Addison comes to Jake’s defense, despite her own reservations with Jake.

The Ghosts That He Knew

The episode also featured several aspects of Jake’s past coming back to haunt him, most notably, his late wife, Lily.  Throughout the episode Jake escapes to their special spot, and Lily comments and lectures on what’s going on in his life.  She lectures him on laying off of their daughter, paralleling Addison’s sentiment that if he pushes too hard, she’ll do something drastic.  And repeatedly, she tells him that he needs to move on, and stop hanging onto her.

Early on in the episode Addison tells Jake that he has to meet with her social worker, as she’s obligated to report new aspects of her life until Henry is officially hers.  Jake is calm, as always throughout his interview, talking himself up as a great parent, though the social worker can see right through him, and when she brings out a fingerprint scanner, Jake hesitates.  Why?  Because of this, he’s forced to tell Addison that he had been arrested, for beating up his wife’s drug dealer.  He fears that this will affect Addison’s chances of adopting Henry, but Addison surprisingly seems to be confident.

Though we still don’t know how Jake did or didn’t resolve things with his daughter, or how his past will effect Henry’s adoption, the episode ended on a rather hopeful note.  Lily’s ghost visits Jake one last time, to say goodbye, Amelia caves to a date that James Peterson had been hounding her about all-episode, and Violet helps Sarah Nolan’s parents find some sort of hope for their daughter’s return.

But most importantly, when she comes home from her day, Addison finds a trail of rose petals leading outside, to a tux-clad Jake, and a request for her to repeat her marriage proposal — which he accepts.

At first I was unsure of why ABC was airing two episodes of Private Practice in one week, but the fact that one led into the other helped make it a more seamless broadcast, and helped to tie Addison and Jake together.  And though the two episodes focused mainly on the two of them, the presence of everyone else was still felt, and even contributed to those major storylines.  I thought it was adorable how Mason wanted Cooper to find out who his biological parents are, and I really enjoyed how Vivian’s presence helped give James a bit of softness, even pushing him to do everything he could to talk Amelia into going out with him.

There are only six episodes left in Private Practice‘s run, and I for one am on the edge of my seat, just waiting to see how Shonda Rhimes will torture me.  If my nervousness throughout “Apron Strings” was any indication, I have no idea how things are going to end for these characters.  Will Addison get to keep Henry?  Will Amelia let herself be happy?  Are they going to find little Sarah Nelson?

We can only tune in to find out.