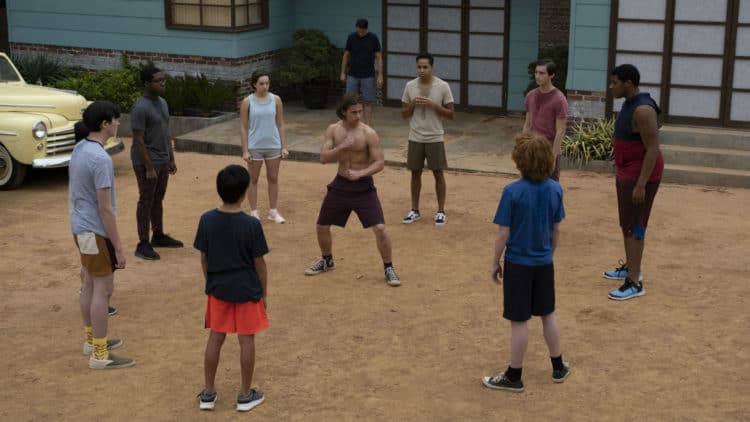 So the first season of Cobra Kai didn’t end on the note that a lot of people wanted. The Cobra Kai won, and worse than that, as Isaac Rouse of Hypebeast and everyone else saw, John Kreese is back. If ever there was a sensei that could be deemed as cruel and capricious as he was effective it would be Kreese, and he’s stepped back into Johnny’s life in a time when Johnny was just about ready to turn over a new leaf. But of course as we’ve learned in the past Cobra Kai never dies, and its lessons are built on pain and punishment. The next season of Cobra Kai seems poised to remind us of that fact as Kreese makes his return and seems to be looking to take control of Johnny’s life once again, and by extension the lives of his students. Perhaps the worst part is that Kreese still seems to be as tough as he ever was, and there’s no more Mr. Miyagi to put him in his place again.

Here are just a few predictions we’re making about season 2 so far.

Hawk definitely embraced the life of Cobra Kai in the first season and has enjoyed being more of a badass than the victim, but it’s safe to say that he took it a little too far. This is unfortunately why he’s going to be one of Kreese’s favorites if not THE favorite since he’s utterly ruthless and won’t stop until he’s satisfied.

9. The lines between right and wrong are going to blur.

If anyone expected Daniel to be the keeper of the moral high ground in the first season they were horribly disappointed since he turned out to be kind of a jerk at times and is still trying to fight Cobra Kai on terms that have more to do with his past than the current era. It’s fair to say that he’s trying to keep Cobra Kai from being the menace it was back in his day, but it’s also fair to say that he’s looking for payback for something that was settled a long time ago.

8. Miguel will still have feelings for Sam.

This doesn’t seem as though it’s going to just go away since Sam was his dream girl and the one person that he would have done anything for. But since he crossed over and became the same kind of jerk he fought against it’s going to be tough to say that they reconnect.

7. The school is going to be a staging ground.

You can see in the trailer that the kids are going to be at each other full tilt and won’t be pulling any punches. The fight between Torry and Sam seems like it’s really going to heat up, all you can wonder though is if Miguel has something to do with it.

Has he ever? The one thing about this guy that seems constant is that he’s going to take every advantage he can and then push them for all they’re worth. He’s about as ruthless as a man can be and then some.

5. Johnny will be torn between doing the right thing and following Kreese.

Johnny wants to get out of Kreese’s shadow, that much seems obvious, but he also knows that it was Kreese that helped him to build his confidence. This is where he’s going to be torn between the idea of teaching his students the correct way to fight and the desire to win at all costs.

4. The fighting between Miyagi-do and Cobra Kai will intensify.

Thing are only going to heat up and it won’t even matter that there are other dojos in town, the two heavyweights are going to be Cobra Kai and Miyagi-do since they have the longest-running history of conflict. Now however it’s going to be a true race to see who can stand up to who in the long run.

The new girl, Tory, kind of looks like Sam, but it’s obvious that she’s a lot more aggressive and is possibly going to be possessive of Miguel if they do manage to connect in a romantic fashion.

2. Robbie and Sam will get together.

There’s bound to be some tension here but it would be nice to see these two actually hook up and find some common ground between them. Don’t expect Miguel to take this lying down though since he seems to still have feelings for Sam.

1. There’s going to be a showdown this season.

We thought we were going to see a rematch between Johnny and Daniel last season but as Kristen Baldwin from Entertainment Weekly points out it really seems to be going down in this coming season since the trailer shows that the two are already getting physical with one another. The question now is after so long, who’s going to win? It’s not a tournament after all, and they both have real-world experience when it comes to fighting.

Come April 24th the fight is back on.