Home
Television
The Middle
The Middle: Oh My God, They Lost Kenny! 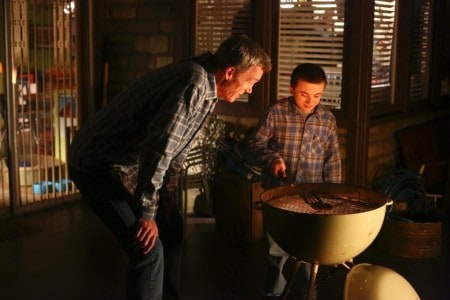 Everyone’s searching for something on The Middle, whether it be a boyfriend, a lost friend, or answers to some of the greater questions in life. In almost all cases, the answer will come when you stop looking.

Brick is suffering the most here, as his most pressing problem is wondering when he’ll be a man. Having attended a friend’s Bar Mitzvah, he feels very confused about not having a similar religious experience to pinpoint to as the real turning point in his life. It was so funny and sweet to see him interview all of Mike’s employees to get a broader perspective on the issue. It’s easy to feel sorry for this kid as he’s always neglected by his family. I mean, he was literally stuck with his head in a trash bag in the background of the scene with Sue complaining to her parents and getting tips from Frankie. Luckily Mike recognized his youngest son may have his many faults in life but his problems weigh on his conscience more than usual. He helped him out by giving him his first plaid shirt which prompted Brick’s response that definitely made me tear up a bit. I’m always rooting for these genuine father-son bonding moments between these two.

Sue’s on the search for a man of her own after learning that Logan might become a priest last week. In typical Sue fashion, she’s not letting anyone keep her down. Until she starts to get the hint that her naturally sunny disposition doesn’t appeal to everyone at quite a few college parties she goes to with Lexie. Maybe getting advice from her 50 year old mom wasn’t the best, but you have to admit it was a joy to watch. Frankie was careful to pick a few areas with room for improvement starting with Sue’s walk that she described as a mix between “a 5 year old and Tigger.” That was a tad harsh but by the very end of the episode, I was glad to see Sue stayed true to herself and walked how she always has. Her confidence was boosted after connecting with the nice guy who runs the campus safe-ride tram car. I know it’s a small campus but Sue still forgot to get his name at least! Did she learn nothing from her year long mystery search for Logan?

Axl and Hutch take the cake for the most ridiculous storyline as you could probably predict. They’re resourceful thinkers sometimes, seeing as how they solved their living situation for now. Who really cares if they don’t have anywhere permanent to park their Winnebago that was previously owned by crackheads? The chase of cops and tickets really keeps them on the move a lot from parking lots to driveways. Somehow though good old Kenny finds them and shacks up in the already cramped space. Axl doesn’t have the heart to kick out his first college roommate so they let him stay. Eventually Axl and Hutch realize they haven’t seen their roomie in a while and they freak out a bit. I especially laughed out loud at Axl suggesting they all fill out emergency contact cards when they get Kenny back since he didn’t even know Hutch’s full name either!

All in all it was another solid episode of The Middle. The message that Frankie delivered as a voiceover about Sue is one that we can all apply to our own lives: “sometimes you really show your best self when you stop trying!”

What did you think of “Man Hunt”?

Everyone’s searching for something on The Middle, whether it be a boyfriend, a lost friend, or answers to the greater questions in life.