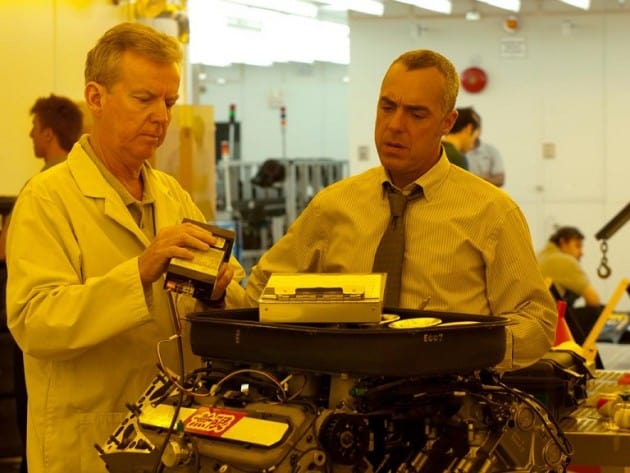 This episode of Suits is the perfect balance between power and heart. The scene with the man who created McKernon Motors’ engines, Dominic Barone, was really well done. It showed that Mike and Harvey balance each other out. Mike keeps Harvey from acting like he’s better than everyone, and Harvey, in his own Harvey Specter way, helps Mike to find his bearings at the firm and to help him grow up so to speak. As I was watching the scene, I was thinking to myself that Dominic’s speech should be one from the heart and not one that’s been written for him by someone else and that scene achieved that aspect, with Mike’s help, as the genius associate asked Dominic about the way that he designs each and every engine.

I felt that the scene could have been improved a little bit when Dominic agreed with Mike when the latter said that Dominic will never be able to pull off the prepared speech that had been crumpled up and thrown onto the floor. Dominic involuntarily pointed at Mike while saying that Mike was right. He could have just either looked at Mike with a sullen expression or whatever and said the line in a somewhat crestfallen tone, which would then have lead to Mike playing the part of the Good Lawyer after Harvey’s exit as the Bad Lawyer. Just my two cents.

I also feel like I can relate to Rachel in some ways, especially when she and Mike were together the restaurant and she pitied him when Mike was assigned the task of hosting his first Rookie Dinner. I, too, want to live off what I make (hopefully) and not count on my parents as much. I kind of felt that Mike didn’t need to tell Rachel about his past, financially speaking, but at least it was subtle so that not a lot of information was revealed.

When Harvey asked Mike if he was trying to be like him during that scene where Harvey just finished talking to a man named Laurence (whom I assumed was a car enthusiast like Harvey after watching the opening scene with the two of them quipping car specs back and forth), I smiled to myself at the irony of that statement. Mike is a reflection of Harvey, which, technically, makes Mike Harvey 2.0.

I also enjoyed the scenes where Mike was trying to get Harvey to high-five him, but Harvey just gave Mike a look that said, “Really? What is this? High school?” and the one where Harvey looked around to make sure that no one was outside his office before fist-bumping Mike. It truly is the beginning of a beautiful friendship, like the one between Peter Burke and Neal Caffrey from White Collar. I was hoping that the two shows could do a crossover episode, but they never did. Guess I will always have fanfiction.

The end of the episode went well. Mike hosted a perfect dinner, and though I was as shocked as Mike was when the camera zoomed in on the bill, I had a sinking feeling that Louis wanted to see if Mike would crack under the pressure of being able to pay such a large amount of money, but his plan was foiled because it turned out that Harvey had footed the bill, thus saving Mike from having to pay out of his own pocket (and I don’t think he has very much saved up). I sense that our favourite closer is starting to care about Mike, but the man just doesn’t want to admit it given that he has “a reputation to uphold.” Onward to Episode 4!